RTS gone casual with some zombies in it! XD
In this game for the App Store developed by Behold Studios, the gravedigger, after being abandoned by all his friends in the village, decides to look for some new friends in the graveyard’s pits. Now he spends his day digging his zombies friends out. The church’s Father, infuriated by his attitude, calls the faithful to a bloody holy battle. The Gravedigger is a real-time strategy game where you choose between human or undead team. The game is simple and humorous, with Brazilian cultural characteristics, like as baroque churches, colonial houses and accordion music.

The game features a “Campaign” mode with 16 challenging levels, where the player controls his own army through a village in order to complete the quests of each level. And a “Quick Play” mode, where the winner is the team that defeats the opposing team leader first – the priest or the gravedigger.

As opposed to traditional real-time strategy games, the development studio decided to make this game without the need to build additional structures. Therefore, new army units must be acquired when conquering houses throughout the course of the game. This concept works better with the casual iPhone player, allowing quicker and more exciting matches than a traditional RTS.

The player must choose from different kinds of weapons when playing with the human team, such as torches and shotguns. To survive that threat, the undead team has its own evolution tree, with zombies, ghouls and skeletons. The resources are scarce, it’s up to the player to manage his units wisely and avoid a terrible defeat.

To promote The Gravedigger and grow its popularity (top games), use the embed code provided on your homepage, blog, forums and elsewhere you desire. Or try our widget.

You play as Zye, a man who has awoken in the internet and has no idea how he got there. Shortly after dispatching a YouTube comment (the game's first...

You inherit a strange box that is actually an interdimensional candy factory. How did this happen? Where are the gnomes coming from? Play the game to...

Tribesmen on the loose! A bunch of clueless Viking raiders have stranded on a group of tropical islands - much to the annoyance of the local Natives...

Go back to the awesome glory days of Real-Time Strategy games. Crush Your Enemies has everything you love of the genre: Planning, choosing different types...

Experience accurate warfare through the ages, TABS uses state of the art physics-based simulation to provide you with never-before-seen insight to our...

Hello, my eager and hearty warriors! Break out your hammers and axes, because your Viking leaders are calling you to wage war upon your enemies! GameSamba... 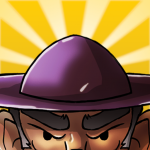