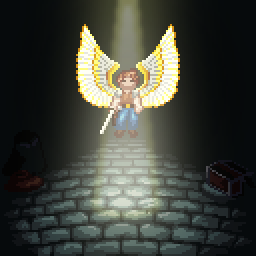 Play the non-premium version now on Kongregate for free!

Check out the greenlit page on steam!

The soundtrack is written by the legendary Grant Kirkhope, composer for games like Banjo-Kazooie, Donkey Kong 64, Goldeneye 007, Civilization Beyond Earth and plenty more!

To promote The Enchanted Cave 2 and grow its popularity (top games), use the embed code provided on your homepage, blog, forums and elsewhere you desire. Or try our widget.

Project HellBlazer: a game about defeating Satan and training demons

Crypt of the NecroDancer

Hardcore dungeon crawling (roguelike) rhythm game. Move to the beat with the game's epic sound track or your own MP3s. Play with keyboard, game pad, or...

Tangledeep combines the 16-bit graphics and polish of classic SNES-era RPGs with elements from roguelikes and dungeon crawlers to create a magical experience...

Through is an RPG with a focus on tactical combat and resource management. It is heavily inspired by other Roguelikes. However, Through carries some key...

Dragon's dungeon - a unique and colorful Roguelike/RPG. Have all of your valor and courage, going down to the dungeon dragon's, full of dangers. Fight...

Stoneshard is a turn-based roguelike RPG with survival and strategy elements. Set off on a perilous journey across the procedurally generated world, while...