In The Cloud Runner (temporary name), the player controls a character who must try and keep travelling for as long as possible to achieve a high score.
So far, this involves jumping across clouds in a simple platform game style mechanic. Watch out for gaps!

The player controls the Runner and must travel across the sky, hopping between clouds. The Runner works for the Moon, and works by spreading the night ahead of the Moon’s journey over the night sky. The moon can’t exist in the day time, and so will be very angry and eat the Runner if he catches up with him.

The player must run from cloud to cloud, trying to keep ahead of the Moon, without falling back to the World. As the player gets further, the gaps will become larger between the clouds, the clouds will be at various heights and the clouds can be a lot smaller. The Moon will also get slightly faster.
There are also some pickups on the clouds, which could add to score or increase the speed of the Runner. 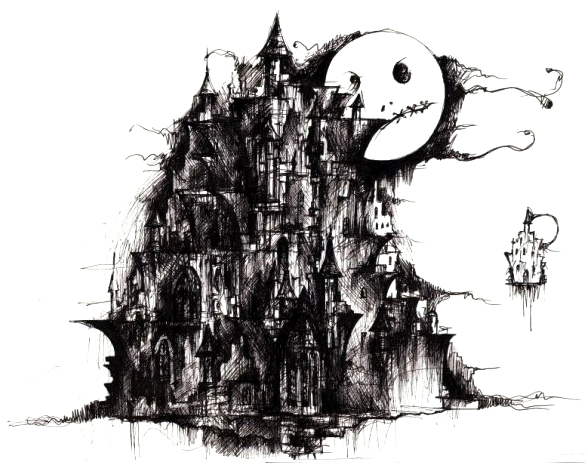 The Runner is an unhinged, psychopathic slave to the Moon. The Moon won’t let him sleep until he has spread night throughout the whole world. The devious Moon has tricked him, however. The World is round, and so the Runner’s task is never complete. Never sleeping has taken its toll on the Runner, and hence he has become rather tweaked and unstable.

The Moon is jealous of the Sun’s power and affect on people, and how the bossy Sun would never let the Moon rest. Fair enough to tour the World once a day if you are the magnificent Sun, but the night shift is a tiresome and un-rewarding job. The Moon has the tedious job of providing light at night time, which no one really appreciates. His bitterness has lead him to become lazy, selfish and scheming. He offered the Runner a job where the Runner could tour the world and see all the sights from a high up vantage point. This deal was very one sided. It leaves the majority of the Moon’s responsibility with the Runner, but with none of the reward or visibility. Furthermore, if the Runner fails at his job, the Moon will eat his soul. What a terrible hidden clause!

As I overlooked the concepts some ideas for the game appeared in my mind. Perhaps they may be useful for you:

A level with a black sea of moon-tears, in the background you see the moon crying out his black tears which fall into the sea of black tears. This could be a very melodramatic, dark, mystic and subtile arrangement of a level.

The wolf could be an over and over again appearing symbol for help. In northern mythology there is the wolf Skjöll (sometimes spelled Skalli, Skoll, Sköll) who wants to devour the sun and Hati who wants to devour the moon. So the wolf could be the symbol of help or alternatively a character with splitted personality (on day he wants devour the sun, on night the moon). As you maybe know the wolf howls for the moon in the night. For example this call could be some kind of ingame-announcement for an upcoming wolf...

Just some ideas and suggestion, I hope you like them.

I'm glad I was voted down for suggesting to the developer that going back to the drawing board would be worth it, because this way criticism is discouraged and I'm less likely to share honest thoughts with developers who's product may sink. You guys are right, next time, I'll just them figure it out for themselves! What a great members we have on this site.

Just so you know, the developers played no part in voting you down and your comments (good and bad) are more than welcome around here. I even voted you up as when I first saw the comment it was on -1 and CaitSithz's was on -2.

Personally I completely agree with you in terms of gameplay simplicity. Originally, this was only meant to be a fun little side project as our programmer had made a basic jumping side-scroller engine in his spare time. I then sourced an appropriate artist (who I knew previously from university) and the project evolved from there.

Firstly, let me assure all of you that this is no longer a small side project. Secondly, in regards to Plejadenwolf's comment I will personally ensure that not one ounce of style will evade the in-game graphics. And finally, everyone's comments are really appreciated and I'm sad to see that some have been voted down.

Thank you to all for your valuable feedback!

I think your "personal assurance" is all we needed to hear, lol.
Great concept, lovely artwork. Keep up the good work Orbital!

Seriously, your concept art is amazing and absolutely unique. I really really hope and recommend to use this style and transfer it to ingame graphics, so that the game really looks like the original concept. Most games (and films) don't look like their absolutely stunning concept art and so are lacking of the great ideas of the original. The concept is immediately and unreflected, without any other "corrupting ideas". Rayman for example is an old game with beatiful graphics and absolutely beautiful backgrounds. I hope this is also going in this way, but a way more in a darker corner of subtile impressions. The draughts shown here are a piece of art, so let the game being a piece of art, too.

Good job so far. I hope you finish it the way you want the game to be.

Good idea and concept but i agree with Techno0nyx, the art direction looks too good to be wasted on a run and jump game.

'The Impossible Game' is essentially a run and jump game and look how successful that was despite its simplicity. Let's give them a month and see how this one pans out :D

Are you serious? On an art direction this amazing you're really going to waste it on a running and jumping game?

Thanks for the feedback, I'm glad you like our new artist. Don't worry just yet as we are still defining what will make the gameplay unique. We also have another game which is very adventure/story driven planned for the same artist.

The Sprixie princess has been trapped in one of the painting worlds! It is now up to Mario to rescue her by collecting the power stars to restore color...

Savage: The Shard of Gosen

Open world, barbarian infused action/adventure/platformer (with a bit of RPG)

An Amazing Adventure. A wonderful land. Kitty Cat Land is a 2.5D side-scrolling platformer in which players help Cats to bring Kitties to their home through...

Crash Bandicoot 4: It's About Time

Neo Cortex and N. Tropy are back at it again and launching an all-out assault on not just this universe, but the entire multiverse! Crash and Coco are...

Puzzle-Platforming Fun With a Brand New Twist! "So Many Me" is a 2D puzzle platformer starring Filo and his band of misfit clones as they attempt to save...

Project in the genre platformer / side-scroller. The main hero is Heli - a girl who was in the world of fantasy and should release the good spirits. In...

Tags
Embed Buttons
Link to The Cloud Runner by selecting a button and using the embed code provided more...