There is nothing more banal than Stargate: The New Enemy as a title, isn’t it? However, what you don’t know, is that it contains many secrets that you will have to discover in 22 missions in the videogame Stargate: The New Enemy developed by an indie development team of video games which emerged three years ago : Mach Creation. 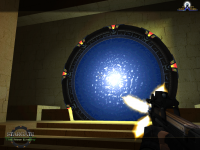 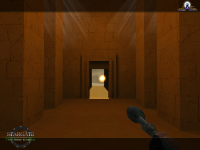 Developed with the software 3D Game Studio, the game will take up the basis of the series Stargate SG-1 with a new story presenting a new enemy that you will have to fight. One plot : to fight a new enemy, you will have to know him. You will have to use your thought in order to drive back a technology that will outmatch you.

This game is a FPS that will purpose you different game modes such as :
- Campaign mod made of 22 missions relating the history of the game will permit you to play the team SG-1. Moreover other missions will put you as a driver of machines such as the MALP.
- Multiplayer mod will allow the players to fight on line in the places of the game with all an arsenal of weapons from the Stargate universe. With a very reactive game play, a screen of the SGC will allow you to get an access to the news of the game (patch, etc…)
- The Free mod based on the system of the precedent game, the SGC 3D Simulator, offering to the player the possibility to go gently for a walk in the famous SGC, HQ of all the operations of the program “Stargate”, and to enter the coordinates of any planet and to go to it if the planet has been developed either for the Campaign mod or for the Multiplayer mod. 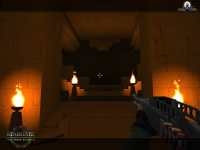 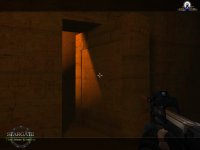 Realized after the cancellation of the video game “Stargate SG-1: the Alliance”, Stargate: The New Enemy stay a hope for many Stargate and FPS fans to play together to a same game in the Stargate universe respecting above all the franchise.

Moreover, the exchanges between the community and the developers will be much tied giving to the possibility to the fans to purpose their ideas, their suggestions and thus to participate to the development of the game that they are impatiently waiting for. 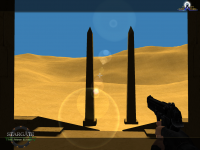 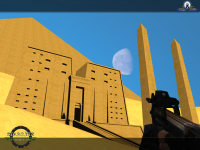 This game has no links with Metro Goldwin Mayer and it is not an official game of
"Stargate SG-1" or "Stargate Atlantis" shows.
All trademarks referenced in these pages -products, videos, and pictures- are the properties of their respective owners.

Thanks for voting and helping Stargate : The New Enemy on it's quest to become the 2022 Indie of the Year. You are now in with a chance to score some free games. Help this game secure more votes by embedding the widget (or link) we have included below on your favorite sites.

As you all know for over 8 months already, we focus on the development of multi-player for fans of the Stargate franchise can play and killed each other on Stargate: The New Enemy.
To this end, the game comes out once in a while in beta-test house in order to test the new additions to each version as well as validate and criticize the gameplay. On 14 August, so this is the version 4.08 is released but several bugs have blockers prevent beta testers to do their job properly. This is the end of a third beta version that has become stable and so the game is currently version 4.08.3.

Is there any need to explain exactly what the deathmatch? I would answer but not much to fill this post, I will.
The deathmatch is a fight to the death between the players and the winner is the one who kills the most people or scores the most points (depending on game). In Stargate: The New Enemy, we decided not to do this gameplay but a Team-Deathmatch (found also in other games), instead it is the one against one, it 'is a team against another, here Tau'ri vs Jaffa.

Here in detail how it works on the side of a player:
- The first player chooses his camp and chose to start his planet that can not be called a planet as "mother" of his camp, for example, the GSC is the home planet of the soldiers Tau'ri.
- Once on the planet, the player can walk but can not equip a weapon or use the Stargate.
- When the server administrator press "Start", a countdown of 30 seconds appears at the end of it is left for action!
- Once the match is over, the player sees a message appears indicating if his team win or not monitoring the results of each member.
The deathmatch is not that this, as it will set up different mode of play is the more conventional timing, with a defined time round and with a number of round. And another mode which will be the "survival" or the winning team will be the one eliminated the other, a death will not come back to life.

Here is another novelty of this version 4.08.3: death in the vortex and Kawoosh!
Indeed, more questions remain in the wake of Kawoosh fear of being killed. But it is not the only one killed, in fact, take the door against the grain is also unhealthy, so pay attention to the dead stupid. : lol:

Now is the time to talk about clans, said it is not a new development in the game but who will one day and who is against already coded and implemented on the future site the game
The clans are what might be described as teams of player who will eventually know with whom and against whom we will play, because it is nice to know against what team we will play instead of the unknown that does even know. This will have a team who can knit and develop tactics and strategies of fighting.
On the site, a player who did not clan, and can choose to create one or join one. The administrator will validate the creation or refuse, and is the creator of a clan that can accept a player joins or not. It will also obviously turning people of his clan who does not respect the rules.

• The surprise of the season!

What better than a new video to make you happy.
In this new video, you will not even we, but you'll also hear us! And yes, for the first time, you will hear me (in french), and as Dedenis Tilgath who filmed, recorded and edited this video.

original text made ​​by Match

So no! We have not forgotten you ^^ We can say that it is the first time that we used such several times the whip on our poor members ... but it has to...

[News SGTNE] Flash on the demo !

Written in the virtual locals of Mach Creation on Friday the 27th 2008 at 11h. Dear Internet surfers...

After a few days being jailed, Sev made an interview of Kor Asek, the Mach Creation 3d Modelling Manager. It dealt of course with his job in the team...

What beautiful days are coming! Stargate: The New Enemy is rising on this year 2008 and we are happy to tell it. Why? You will quickly understand.

You can thank warmly Tim for all the efforts that he has used to the realisation of that video (as well as all the strokes of whip that he suffered).

You can thank warmly Tim for all the efforts that he has used to the realisation of that video (as well as all the strokes of whip that he suffered).

This is a "Stargate : The New Enemy"'s Wallpaper of the Stargate to the game.

could you upload a demo level of it?

Whats the situation with this mod is it dead are you still working on it?

So many videos of gameplay, videos, which shows what a great work has been done, how about a early beta version of this mod, is all work should be wasted?

Yes, every Stargate games are dead... But I hope I can find some...

Take a look at Stargate Network ;-)

please do not tell me this game is dead!!

Tags
Embed Buttons
Link to Stargate : The New Enemy by selecting a button and using the embed code provided more...