UPDATE: Re-uploaded the map with some minor changes. Fixed sounds, added new ones, fixed some localization bugs, added some secondary weapons, and added lowres models to the characters that needed them. ---- My first map release. Started out as an experiment that tests the limits of mixing Starfighter combat with Infantry Conquest and XL ai numbers. Lots of ai, starfighters, skyscrapers, and Capital ships! Intense fighting Takes place on platforms between skyscrapers. Some bugs and other irregularities but its still a lot of fun!

DISCLAIMER: Turn View Distance
and LOD distance in your video settings all the way up for this map to
look the best it can. Trust me!

---
Credits:
Dragonum/ Bertie For Munificent Class Frigate
Forcemaster for the amazing Venator and BTL-B Y-wing models.
Warb Null, for all the other non-stock capital ship models and E-wing.
Warb Null, again for letting me edit his Z95 into the Clone z95 and regular z95 model.
Psych0fred for the New Republic's troop transport (Republic Command Shuttle)
Rends: Coruscant city assests (skyscrapers, platforms, containers)
RogueKnight and Pahricida: DC-15 rifle
SoM3 and DEVISS-REX: DC-15s Carbine
deviss, icemember, DARTH D.U.C.k. NeoMarz and dragonum for Commander Bly model
Taivyx for the Stouker rifle
tripider, TwinkeyRunaway, Unit 33, Glith, and Nedarb7 for The New Republic support and pilot model/skins.
TwinkeyRunaway for the luke skywalker skin.
Dragonum for the Clone Support pauldron.
Backpack addons by Deviss and Tripider.
Deviss for various clone/stormtrooper skins.
Teancum for the Naboo pilot model used in the Suun Ra Defense side and the New Republic Soldier model. (released in his infantry side)
DARTHD.U.C.K. Nar Shadaa Building assets, remapped clone trooper
kinetosimpetus for Hyena Bomber, Imperial Heavy Repeater, DH-17 Blaster, a295 Blaster Rifle
Tripider and Sereja For the Rebel Captain Model.
Parhicida: Boba's Rifle
CodaRez for The Reublic Sniper Rifle
All Dlt19 and Dlt20 models were made by myself from stock pandemic assets. Inspiration from Maveritchell:)
Deviss and RogueKnight For DC-18 pistol
Broken_Hope for custom lightsaber hilts
RepSharpshooter for SWBF2 1.2 assets
Teancum for Quinlan Vos and luke skywalker skin from his heroes assests.
Pandemic for all the assets and making this mod and all others possible.
Gametoast for the immense amount of swbf2 modding knowledge. thank you guys. 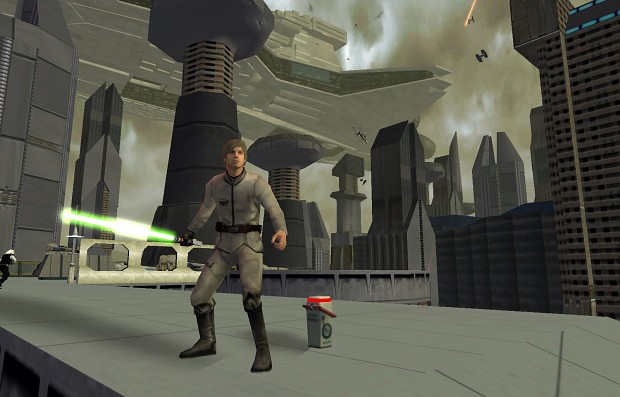 THIS IS THE BEST MAP I HAVE EVER PLAYED!!
It is like a combination between Cato Neimoidia and Coruscant! You can fly the fighters seen in The Clone Wars!! And I love the fact that in Galactic Civil War you actually play with the New Republic and the Imperial Remnant!!
(yes, i'm the Generalfacu from Gametoast :P

Is there a way to increase fps ?
My computer is dying on this map

Yeah lower the graphics. I played on a crappy computer and lowering graphics helped.

does anybody have any tutorials how to make a map for this game.

Also check out Gametoast.com if you need help with anything.

I learned nearly everything i learned about modding swbf2 from Gametoast. The mod tools come with really helpful tutorials as well.

I need help with the mapping, I mainly know how to make it. But whenever I munge any of my maps it doesn't munge the level or any of the lvl. files just teh adme script and 3 letter digit folder, munge.

well just saying when I munged the map I looked at my ARZ file in BF2 addons and when I went to lvl pc there was no ARZ level or any anything help please?

THIS IS HANDS DOWN ONE OF THE BEST MAPS IVE SEEN FOR BATTLEFRONT 2!!! the combat is so intense!!!

I expect to see more awesome maps coming out in the future!!

This is a great map, but at least I am getting horrendous performance with it. Like, 10~ frames per second when in the center of the ground portion of the map (but 60~ whenever I'm up the the sky). It's the only Battlefront 2 map that's ever pushed my system, which though a couple years out of date is still pretty reasonable (i7 3770, 660ti overclocked, and 8GB of DDR3). A little optimization and this could easily be one of the best Battlefront maps I've ever seen released.

it's not you computer, don't worry. Its the game's engine, which can't handle the shadows. If you turn off the shadows everything is fine.

This is by far the best battlefront 2 map in my opinion. I hope you make more :)

This is an amazing map !
I really hope you'll make others, because this is obviously my favorite map !
IT ROXX !!!!!!

it keeps crasing every time i try to play the map i really want to play it can somone help me please!

hey, I put it in my addon folder and it did not show up on my map list please help steam version

does this have clone wars too?

Of course you can play as a great TCW battle!

Does this map work with conquest or only space assault?

Greatest map I've ever seen! Keep up the amazing work!

Can anybody explain to me about those turrets? I entered it and it blew up after a few shots

One of the best if not the best space to ground maps.