A Star Wars Battlefront II map featuring an epic battle around and in one of Duros' many orbital cities!

This is the latest version of the map and I have taken all suggestions into account that I regarded sensible. 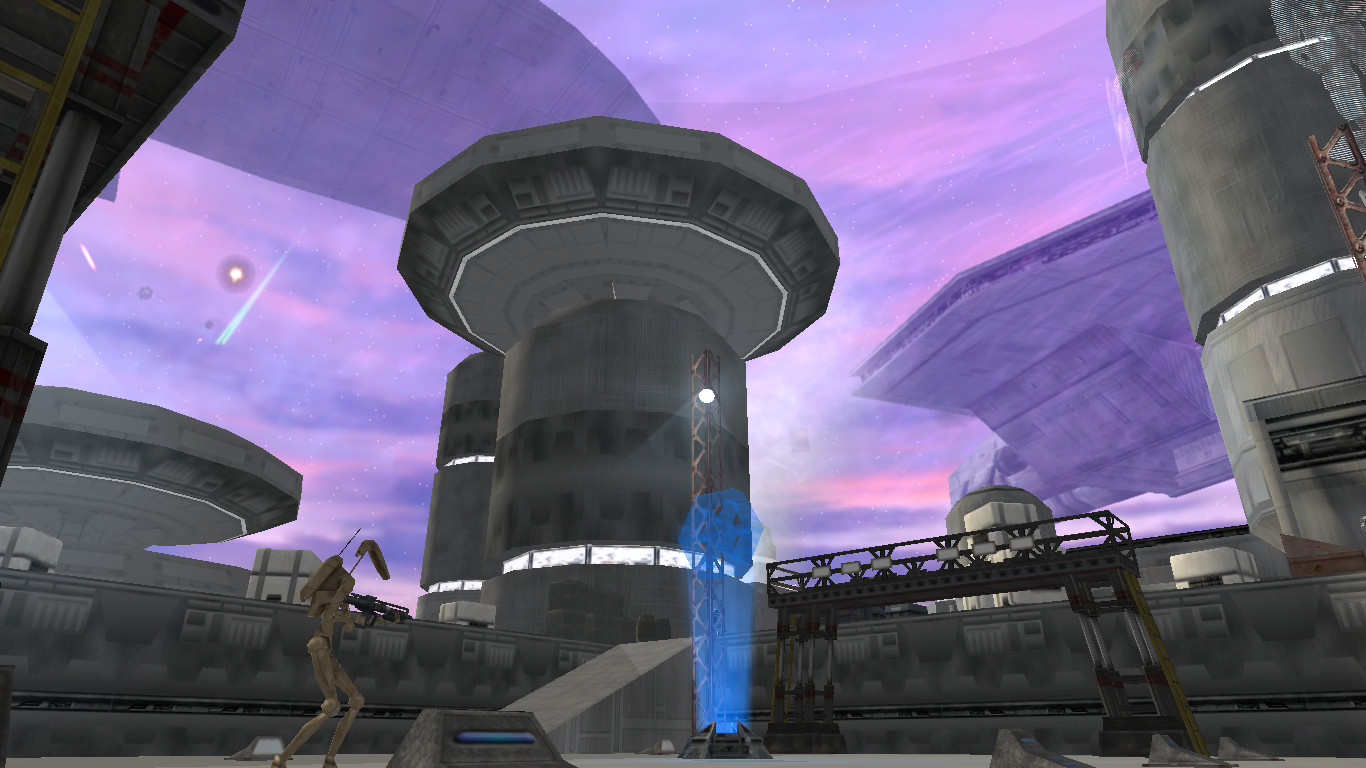 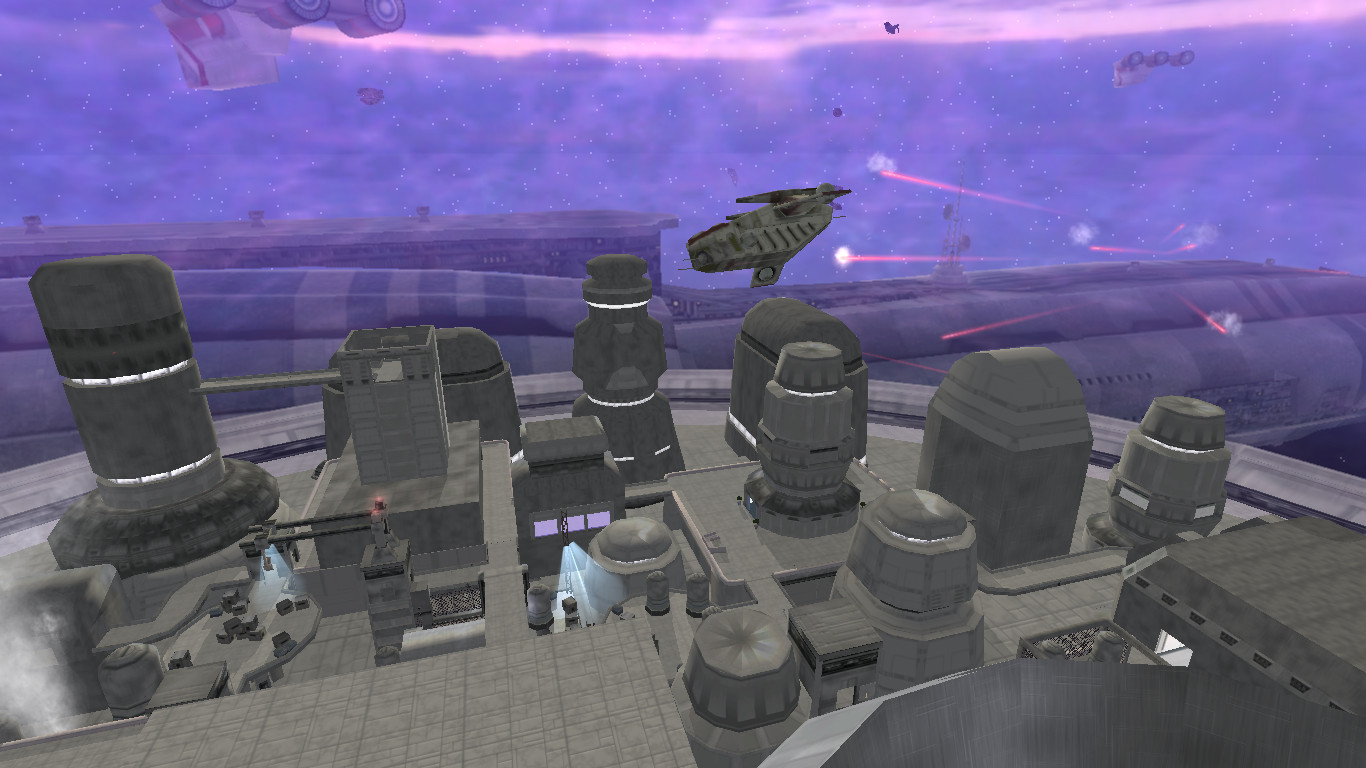 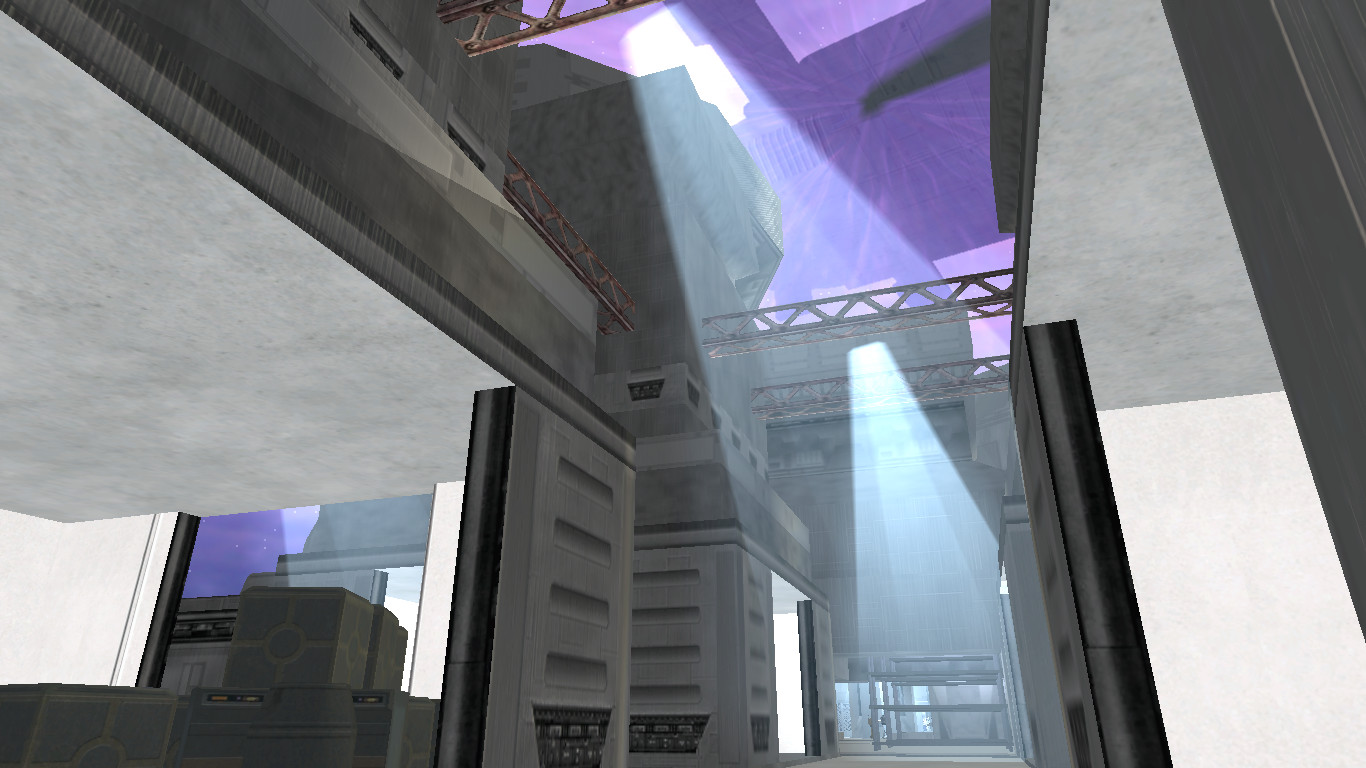 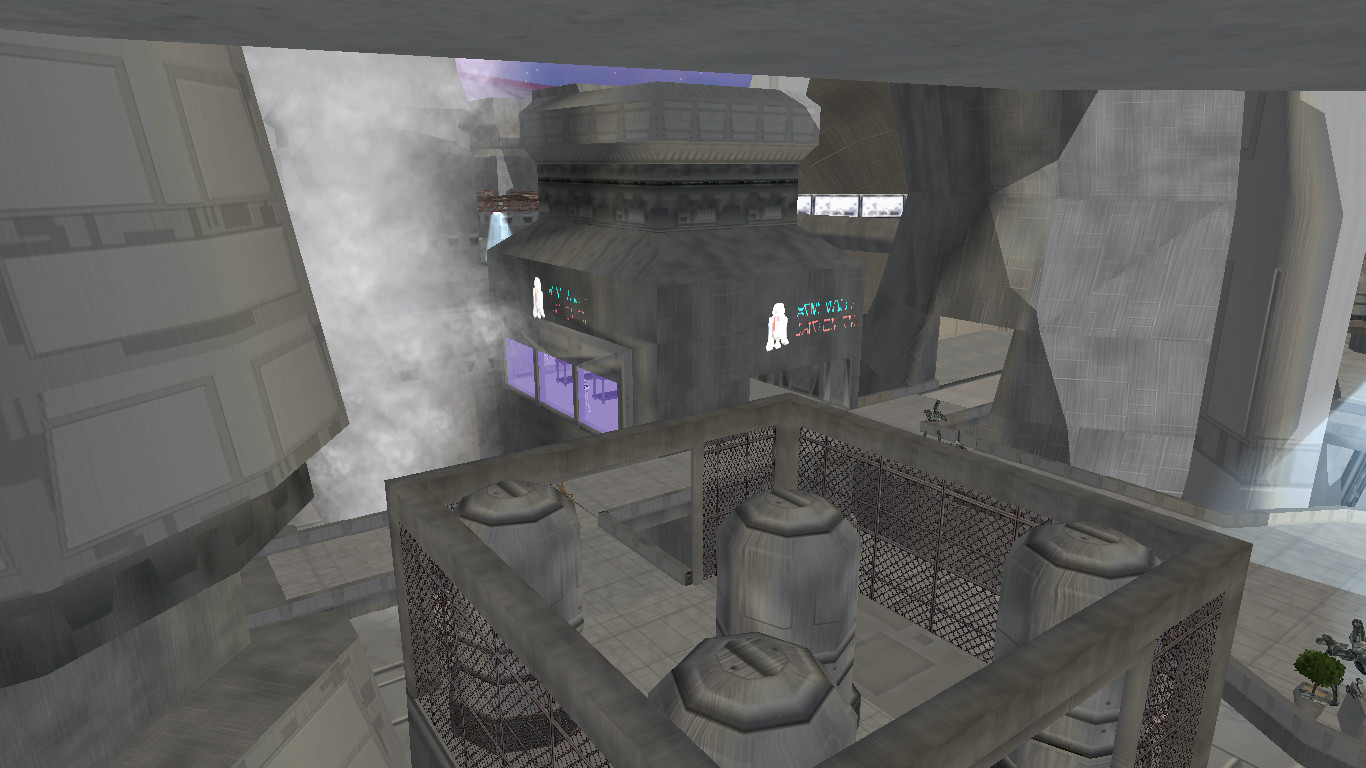 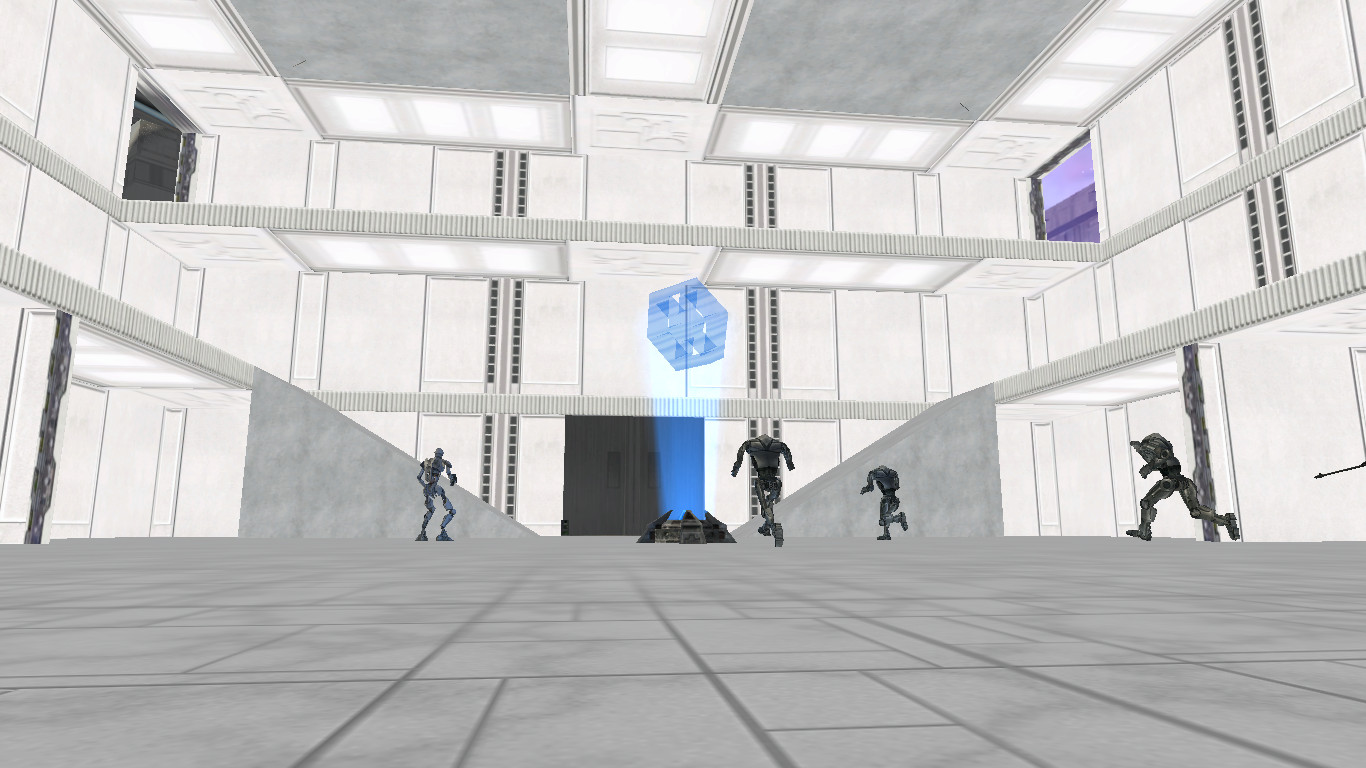 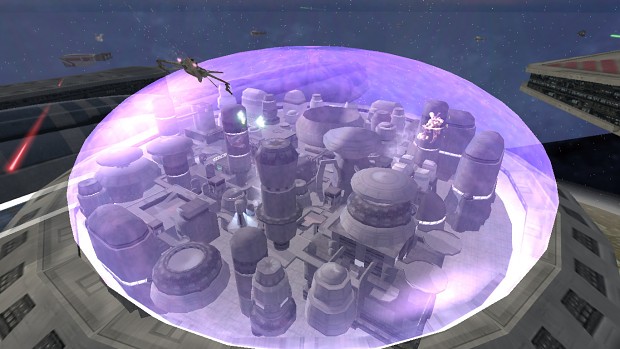 I have the old version of this map. do I delete it or what?

I'd be honoured if you kept it, however it is not required to be in your addon folder for this map to work, just overwrite older versions

I cannot play this map. I have created side mods with stronger weapons, and this map cannot handle replaced sides.

That's interesting, can you expand on that? It'd help with iteration

I've been using custom made side mods, and if I do not replace the stock sides in your mod, the battle WILL be disadvantageous to the Republic side. I tried to replace the original Republic Side with my powered sides. But it crashes.

I enjoyed it. I played mostly on the ground. The battles are indeed hectic, and I enjoy that. I actually like the small size of the map. Isn't really a city, so to say, but it's large enough.

The classes feel... weird. Especially the Heavy and Assault, who have the same weapon. It was odd having to spam click to do any real damage, and where in the world did the Heavy's rocket go?

The sky (space?) battle was impossible. Literately, the moment I left the Venator, I was shot down. You might wanna redo the turrets.

Played a few matches, the map is great. I love the detail you put into it and I appreciated how you made some of the classes unique as well. Very ambitious project and I'm looking forward to future patches.

However I think the space portion is lacking. As the Empire, if you spawn in space after all the tie fighters are gone then you have to wait for them to spawn in again, which takes way too long and sometimes doesn't happen at all. You're just left in your own empty hanger watching the other ships spawn in. Several small hangers are a cool idea but I think it's best to just stick with one big hanger instead.

Also as the Empire, when I do get to fly and I stay a while in space then the rebels always win on the ground map. Ruins the space portion too since it really discourages being a tie fighter to begin with, making it almost worthless. Dunno if it's because I play on elite AI as well with high player & reinforcement counts but if there's a way to fix that I'd appreciate that.

Other than that, it's a very well presented map and a great concept. Looking forward to seeing where it goes.

Awesome! I love it! It needs some improvements though as stated by others above but I love it. It's a good concept. A city floating above a planet! In space! It's like Bespin in space! And the space hangars thing just had me love this map so much!
On a different topic, how does one actually edit the ships without hangars to have hangars? And how did you add that shield? I'm new to modding and I'm working on space maps with this kind of a thing, so help?

Cheers! You will need the ModTools and a modeling software, check out the FAQ section in SWBF2 Modding on Gametoast, best place to learn

Played this map recently, and loved it. I really enjoyed the cramped gun-play in the orbital platform, which worked really well with the huge amount of detail you put into the map. It is an especially pretty map, which I find a little difficult to find amongst many more bare maps on ModDB.

However, a small issue that I don't think has really been covered is that the matches tend to end prematurely; the space combat tends to drain many of the bots away from the orbital platform to the dogfighting. Consequently, even if you have max bots and reinforcements, matches last no more than 5 minutes before the base runs out of bots and one side captures all the command posts, winning the match.

The issues with dogfights have already been mentioned so I'll add no more there. There are a couple of changes that might fix this issue: either you could release a ground-only map with the capital ships as sky decoration (btw they look gorgeous when looking up from the ground), or add a command post in a capital ship for each side so that if the platform is conquered the game doesn't just end on the spot.

Hope this helps a little with feedback. Easily a map that stands out so fab work! :)

thanks for your proposals, I'll deffo bear them in mind when polishing, and I'm glad people enjoy this map regardless of it's flaws

Would it be possible to get BFX sides on this map? Thanks!

Maybe you could add civilians as a team 3 like natives in the vanilla map. Also I think you should just make falling off the walkways kill you. Because it's obvious from the level design your not supposed to be down there so why even allow it.

Finally having the Hangars in the right spot for the Star Destroyer, been wanting that for years upon years, that the TIE Fighters launch from the correct spot too is even better.

I like that I can land anywhere on the platform, far too many of these space/ground maps have arbitrary criteria on where I can and can't land and no visual distinction requiring trial and error.

The platform is interesting and fun to fight in.

Medic class loses his rifle when the Award rifle is given, leaving him only with the fusion cutter. Haven't tried out the other custom classes.

Nebulon B does not explode when "destroyed"

MC-80 Liberty cannot be damaged at all, and is too small.

Each TIE Fighter launch bay is separated, so if there are few fighters left you can see one or more on the other side of the hangar area, but have no way of getting to it other than suicide and try again. It also would make it impossible to chose a fighter/interceptor/bomber as Empire, forcing you to effectively roll a dice. (if anything other than fighter spawned) Lack of interceptors or Bombers on Imperial side would give too much of an advantage to Rebels in multiplayer. TIE Fighters lose health and explode in their launch bays.

There's no real benefit to the space combat at all, outside of bombing/strafing runs on enemy infantry, or "deep striking" to capture a command post. However, the problem with the Medic class prevents this from being effective as the Empire. The total lack of fighter spawns on the platform itself makes it a one-use-per-spawn ability as well (unless someone in multiplayer brings a Y-Wing to pick up the other player.). Destroying the bridge, Engines and heavy turrets on the capital ships gives no benefit. Capital ships don't have their sensors or communications either (though the Star Destroyer's globes could serve as such with some scripting.)

The lift at control point 2 is nice, but goes nowhere interesting
The lift at the center of the map doesn't let you go down all the way (though it lets you back up if you fall down there somewhere else), the character walks on air and there are invisible barriers blocking blaster fire everywhere. Sometimes enemies get stuck here, which can drag out the map.

The far Mon Cal Cruiser's hangar covering is misplaced, allowing fighters to fly inside of it and target the hangar.

Some areas on the platform cause infantry to get stuck (an area in the center at the fountain, there's an alcove that I got stuck in)

The landing platforms beside capture point 5 have invisible walls at the door, so I cannot get to the point that way...

Control Point 6 and 7 cannot be captured, though I understand that this may be because the AI isn't smart enough to land troops from fighters onto the platform.

A map with tremendous potential, and the Hangar change to the Star Destroyers is something I would love to see improved upon. It's what first drew me to this map.

Connect all the launch bays, prevent the TIEs from damaging themselves in their bay, have an Interceptor and Bomber spawn in a bay on either side, so out of the 4 bays on either side, 2 spawn fighters, 1 spawns interceptors and the other spawns bombers.

Place another large bay at the other end of the hangar, and some "teleporter" Turbolift looking things to instantly take you from one big hangar to the other, Have the big hangar at the back spawn shuttles and the one at the front destroy fighters after they are left unattended as if it was on the platform (since I don't think it's possible/feasible to script a crane picking them up and cycling them back to a launch bay). That way we have fighter bays, shuttle bays and a landing bay.

Wow, this addon is so old now I cannot beleive one would go through the trouble of writing such an elaborate review about it :O Cheers a lot though, I think the smaller version of this map was way more balanced and I was simply going for bigger=better. Play the alpha version and tell me whether you think,that it is better than this version and if it was with space combat. But this review was really elaborate and covered pretty much everything. I'd love to rework it, but my schedule wont allow it for the forseeable future, unless I give up on current projects and I do think, that you'll favour them over this one. If this is very dear to you and other players and the response is congruent, I will queue this project. Thanks again!