Up to 4 friends battle each other simultaneously on just one device in this simple but fun arena shoot 'em up game! Control your fighter and pull off your special moves with the well-timed tap of just one button!

• Competitive gaming anytime - anywhere! 4 Players on one device!
• Frantic shoot'em up battles with awesome special moves!
• Master the tap and hold one-button controls!
• Pay once, get it all! No additional cost, pure fun!
• Great for pick-up and play video game tournaments at your event or party!
• » PC exclusive « Hook up you PS2 Buzz controllers and play with big buttons!

We developed SPiN WARS originally as a fun-project-prototype. Since then the game was brought out at all Brightside Games parties or game nights. We had so much fun with our SPiN WARS tournaments that we decided it's about time to release this little gem to the public! We don't think it's easy to market a local multiplayer only game, but we just want everyone out there to be able to enjoy it as much as we do! So gather your friends around your device and have fun!

Thanks for voting and helping SPiN WARS on it's quest to become the 2022 Indie of the Year. You are now in with a chance to score some free games. Help this game secure more votes by embedding the widget (or link) we have included below on your favorite sites.

SPiN WARS 50% off and out now for Windows Store

The Windows Store version supports Multitouch input and Windows RT Tablets! All May long you can get it for free and unlock 3 and 4 player gameplay for 50% off the regular price! 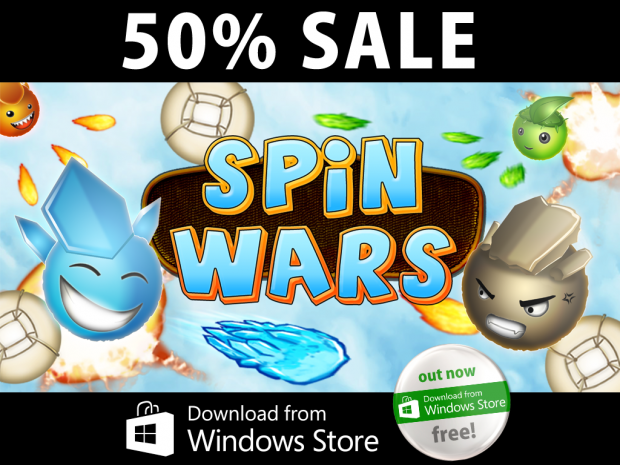 If you perfer to play SPiN WARS with controllers on your regular Windows or Mac Computer get the Version from Desura Indiedb.com which is also 50% (only 1.75 €) off for a short time!

You can play SPiN WARS now at E3 at the 100% indie booth! In celebration of indie game development we reduce the price of our party game SPiN WARS for...

Last chance to get SPiN WARS in Indie Royale Bundle!

SPiN WARS is part of the Indie Royale Bundle for one more day! Get it now and exclusively get access to the early prototype of the game called Button...

In celebration of indie game development we reduce the price of our new local multiplayer party game SPiN WARS for PC and Mac by 50% to an incredible...

Control your fighter and pull off your special moves with the well-timed tap of just one button!