SoulHunter is a 3D adventure game with sword-based hack- and slash combat. The main protagonist of the game, is kind of an anti-hero, a wretched creature that has lost its own soul. To survive, it has to consume the weak souls of the monsters inhabiting the large forest in which the game takes place.
SoulHunter is a one man project.

Thanks for voting and helping SoulHunter on it's quest to become the 2021 Indie of the Year. You are now in with a chance to score some free games. Help this game secure more votes by embedding the widget (or link) we have included below on your favorite sites.

For those of you who haven't seen this game before, SoulHunter is a 3d adventure game, in which a troubled creature has to travel through a dark forest in
order to restore its lost soul.

The game is heavily inspired by the Legend of Zelda series of games, and has an
artistic style reminiscent of that in the Rayman series.

In the game you control the creature known only as "SoulHunter". Wielding a magical sword and an old
shield, you have to battle your way through the forest, encountering different monsters whose
souls you have to absorb in order to stay alive. 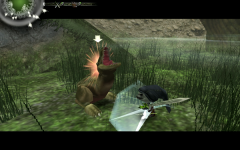 Note: Since this is an alpha release, and a one man project, there are quite a few bugs and issues.
However, since I have worked on this project for a really long time(almost for too long), I will only prioritize game-breaking bugs, crashes and spelling/grammar errors. However(again), I'd still like your honest opinion on the game, since it may be valuable for future projects. I just want you to know that I won't add any more features, or make any major optimizations to SoulHunter. I hope you understand.
A discussion thread with found bugs and thoughts can be found here.

Development of SoulHunter is nearing its end after over five years of on- and off development. As I'm currently preparing the Alpha, making sure that...

In this video I showcase the multiplayer deathmatch mode, the new main menu and the final boss fight(which utilizes my homemade bone- and skin system).

SoulHunter is finally completed! Alpha 1 is now ready for download.

Awesome :D ! How did you design the levels ?

when i launch the game all i get is a flickering black screen for about 5 seconds, then it quits back to my desktop, even when i run as administrator...

Camera control really needs improvements.
The first thing I would add are two buttons, left and right, to manually rotate the camera. I played it with an Xbox pad (via Xpadder), and if I could rotate camera with my dorsal buttons, the gameplay would be much better.

And the game is too slow and too heavy. I hope it will be much faster on its final release.

I love the style of the graphics (even if it is too spartan at the moment) and of the level design too.

i have to agree.
another thing i noticed is the music doesnt come together nicely. but it could be because the game is super slow, and again the camera feels restrictive. It feels like it was built for an old controller set up.
The camera is also very slow in moving around as well, which was very annoying.

another thing (i only played through level 1 mind you, so it may not be this way) but i noticed the mobs arent agro, anotherwords, they dont attack you until you attack them. Didnt feel right, since you could be taking on several, but in reality your only fighting one at a time.

other than that, i love it xD
Its like playing a crossover with zelda and nightmare before xmas xD
im definitely going to be watching this.
keep up the good work :D

lol never played a hack&slash like this before... remids me of south park masacre- the game :D

I played a bit of the alpha and I love it. The only thing that bothered me was the camera controls. It seemed very sluggish and restrictive. If the camera controls were improved, then I could definitely see myself playing this game all the way through.

I commend you on doing such a great job by yourself. I understand how hard it is doing a project like this by yourself.

I absolutely love the dark, tim-burton style zelda visuals you have going. And the title animation in the menu is fantastic.
+1 Watcher.
I can't wait to see what you do next!

@thunderising:
It's just me working on this project(that's why it's taking so long).
But I'm working on a Unity project with some friends as well. ^^