Construct and design buildings for optimal working conditions. Hire people to design and release software, so you can defeat the simulated competition and take over their businesses. Manage and level up your employees to make sure they are skilled and satisfied with their job.

Thanks for voting and helping Software Inc. on it's quest to become the 2022 Indie of the Year. You are now in with a chance to score some free games. Help this game secure more votes by embedding the widget (or link) we have included below on your favorite sites.

Fit For a King

The 28. Of November 2015 will be the first day I work on Software Inc. full-time. All the support you have given me, since I released Software Inc. on Steam, has allowed me to quit my day job and start making games fulltime. Software Inc. is still far from being finished, and I expect to work on it for at least another couple of years, before I consider it complete. However, the final release date has just been pulled a little closer.

For the past months, I have been working at another company every Thursday and Friday. I have had a great time there, and I’ll be sad to leave, but making games has been a dream of mine since I was a kid. Being able to spend all my time on it, less than a year after concluding my education, is amazing. Getting two extra days doesn’t seem like a lot, but programming is mental work and there is a lot of momentum involved. After coming back from working on something else for 2 days, I have to spend time remembering what I was working on. With that in mind, I expect development to really speed up now, and I expect to be able to interact more with you guys and be more open about the development process.

I’m really grateful that you’ve believed in the game enough to support my work and I hope it’ll live up to your expectations when it’s done.

I thought I’d spend the rest of this announcement doing a visual recap of how the game has progressed, since it began as a pathfinding prototype in June, 2014. Right side is how the game looks now, click pictures for full size. 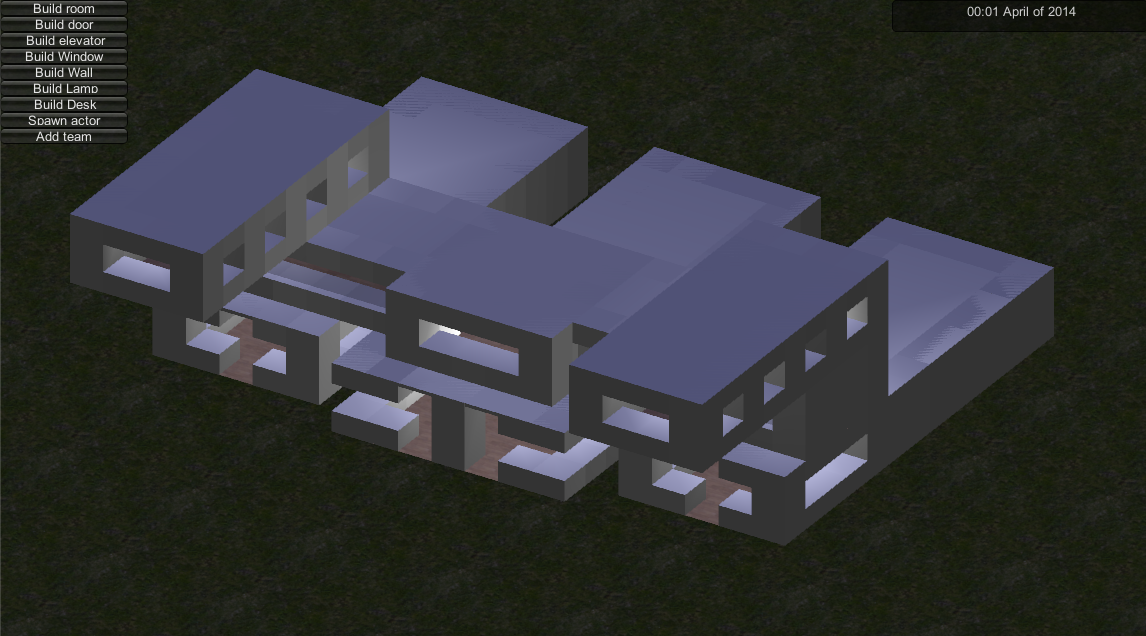 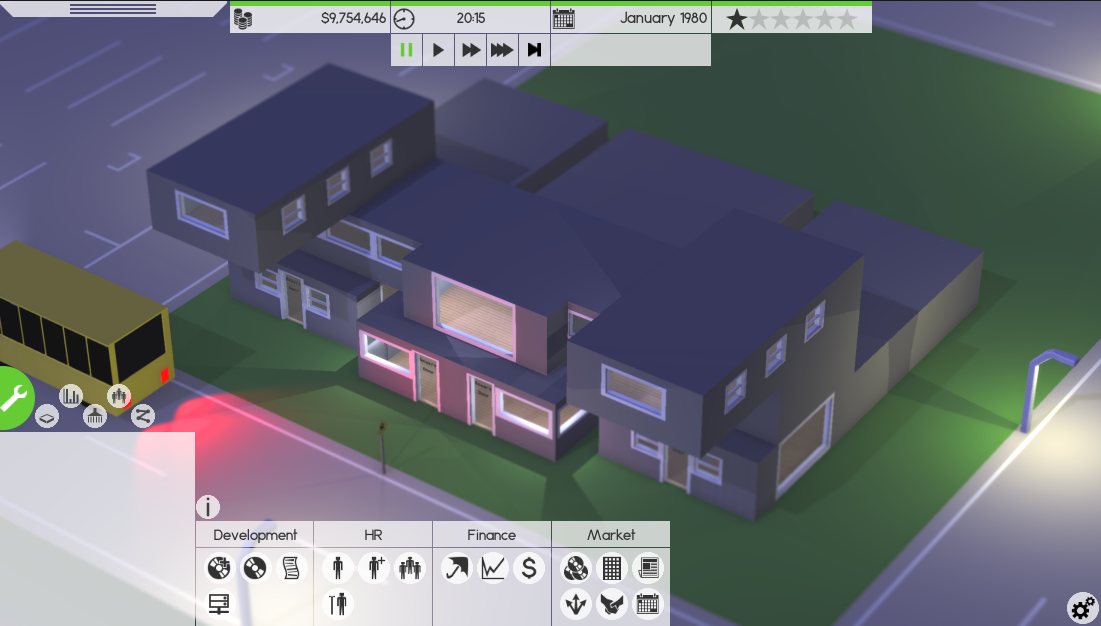 The image on the left is one of the first screenshots of the game. Note how the game was completely grid based, as walls were 1 meter thick, which it it no longer is, due to the building update. There is really not much from the old building code that has survived to this day, as I've chipped away at it, piece by piece. 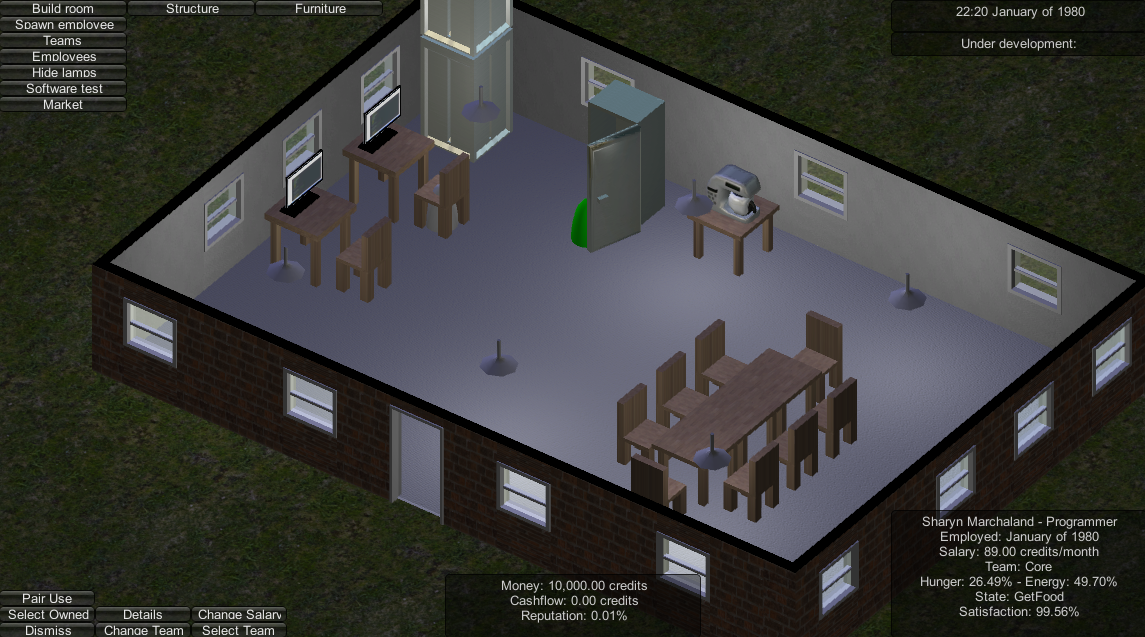 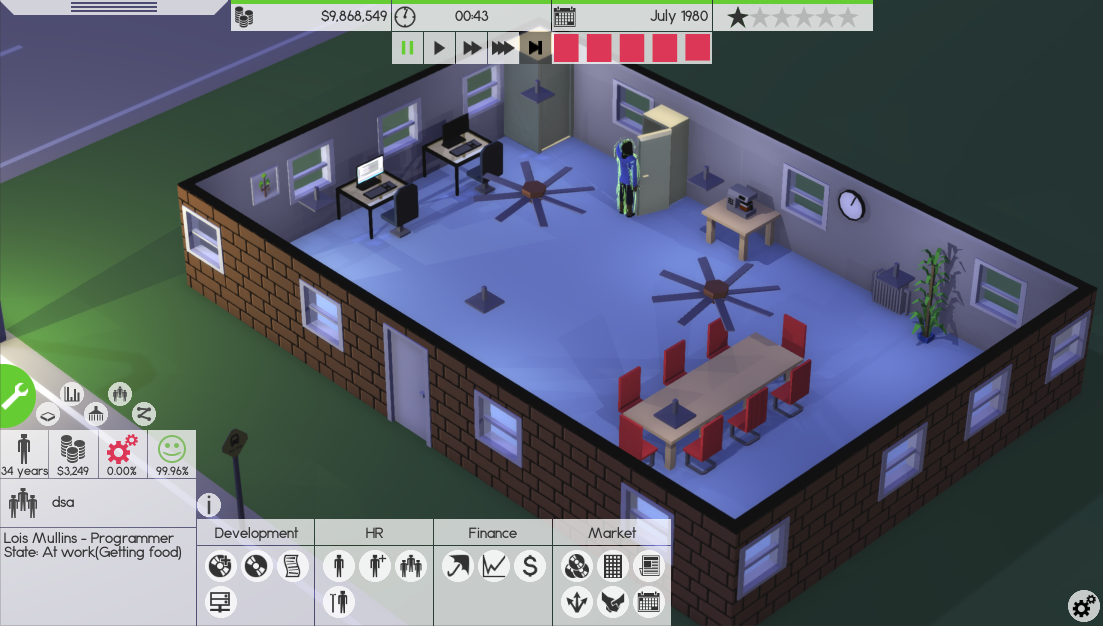 The game used to be isometric, but there were some problems with shadows and clipping so I decided to go perspective, but with a very low field of view, to mimic the isometric style. Walls used to be placed at the center of grid cells, which resulted in windows not being able to sit at the edge of a wall and furniture could not be placed up against a wall either. The game looks a lot softer after I removed most of the textures and went for a more simplistic style. You can see the right click context menu used to be a set of buttons in the lower left corner. Chairs, tables and computers used to be a single unit you placed, so you couldn't mix and match them as you can now, and I plan to expand on this by adding computer add-ons, such as phones, tablets, etc. 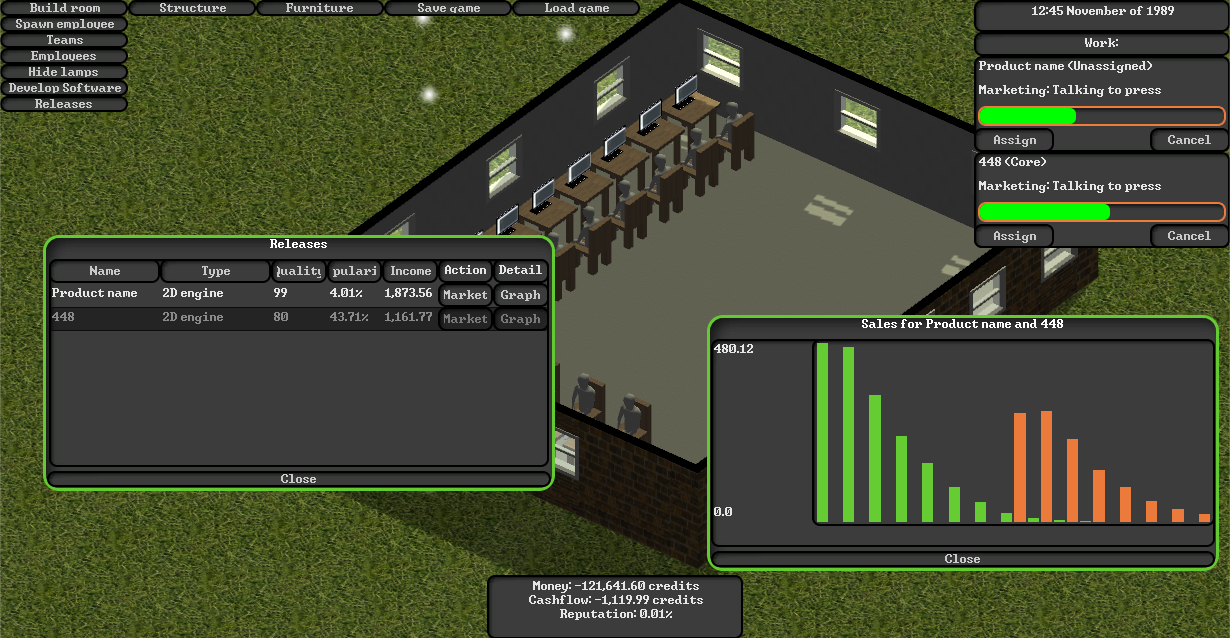 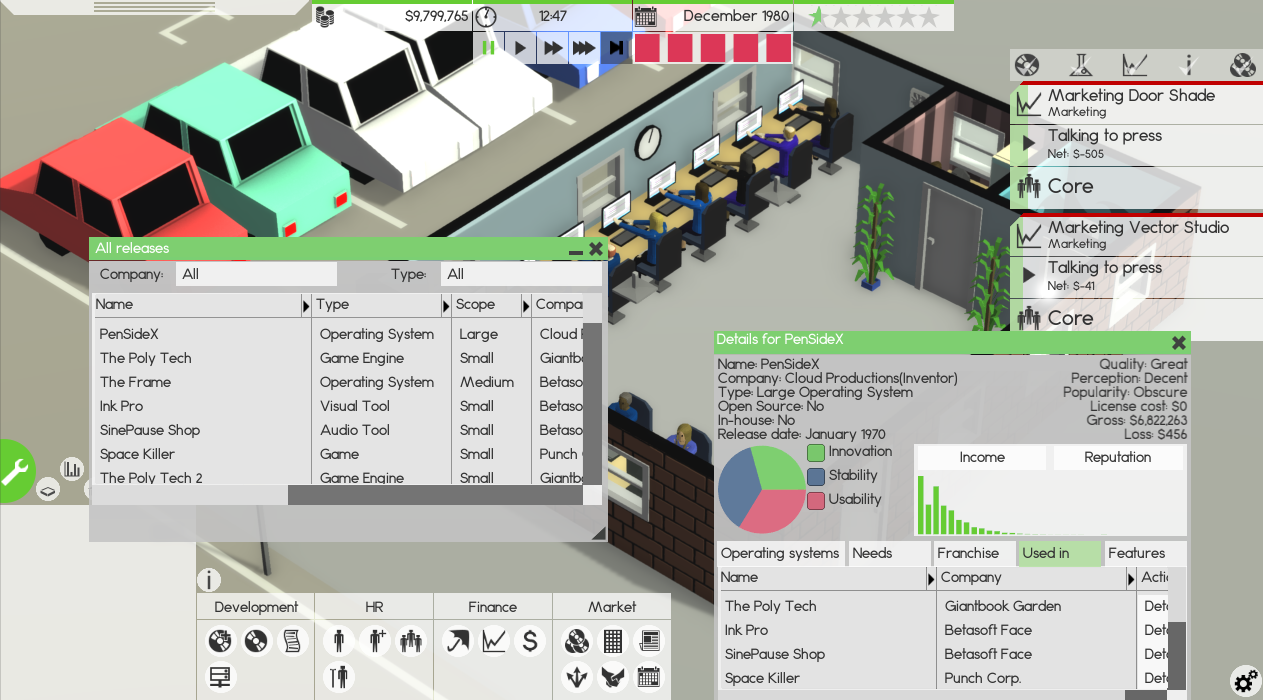 I took this screenshot to show off all the new (UI) windows. In the early version of Software Inc. I was using the old Unity OnGUI system, so Windows weren't scalable. Most of how the UI looks now was made with the help of Wouter Buckens, you can check out the forum discussion that led to the overhaul here: Softwareinc.coredumping.com

The UI still needs work, especially when it comes to informing about the market, and I expect to replace all the icons at some point. 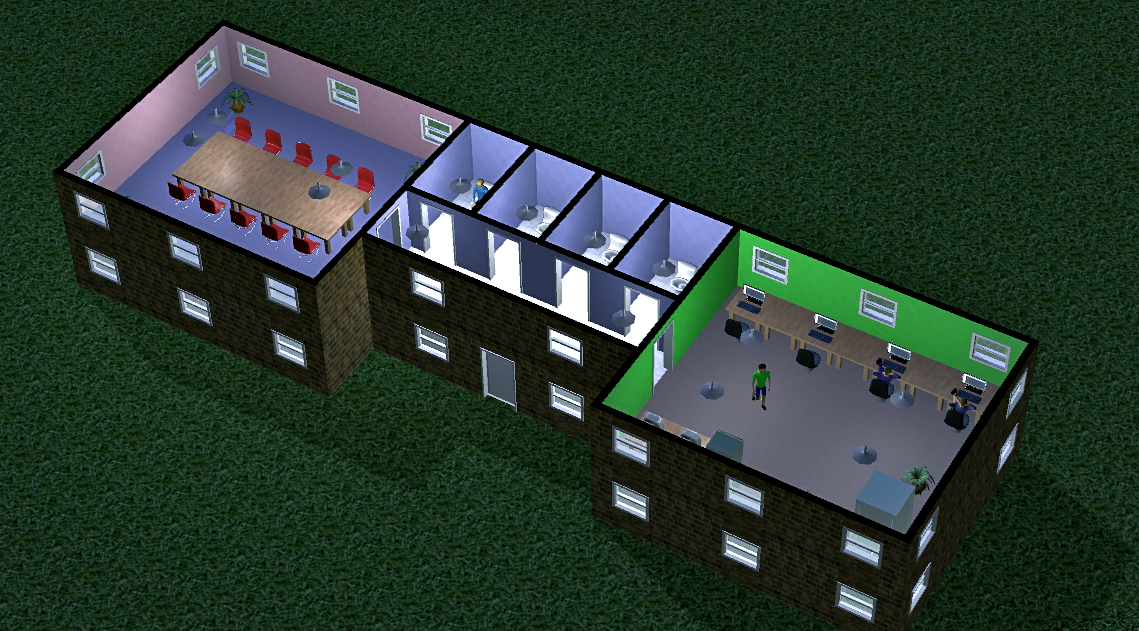 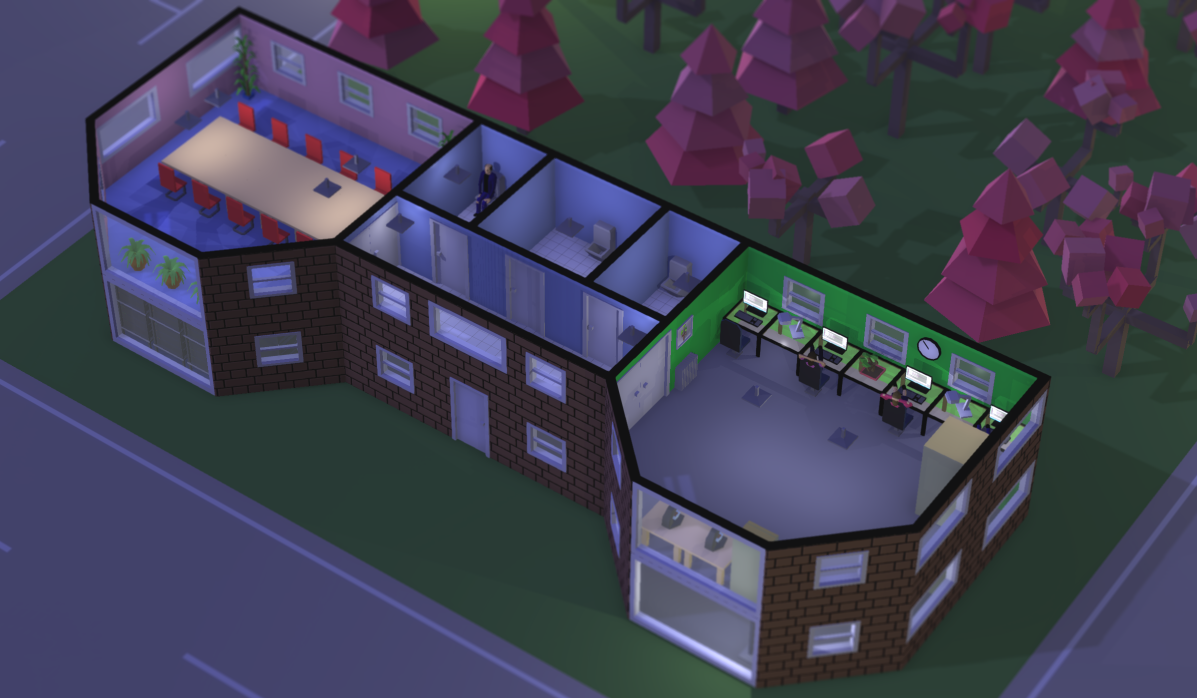 I took this screenshot to show off the building mechanics and to give an idea of how it looks when the office is simulated. I added some details to the screenshot on the right, like showing off how walls are no longer confined to a grid. The trees really help liven up the screenshot. 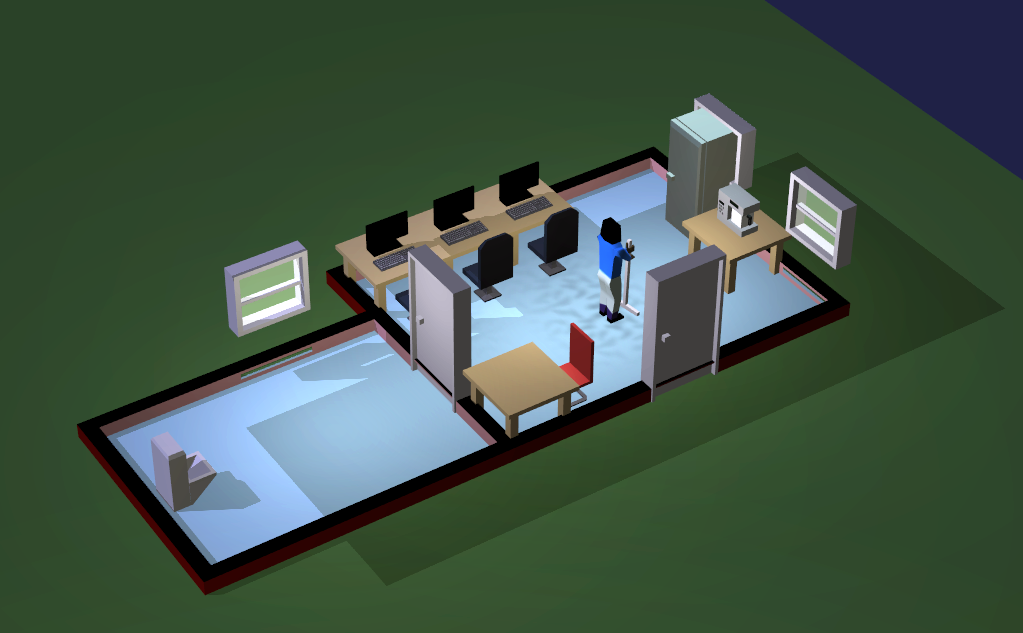 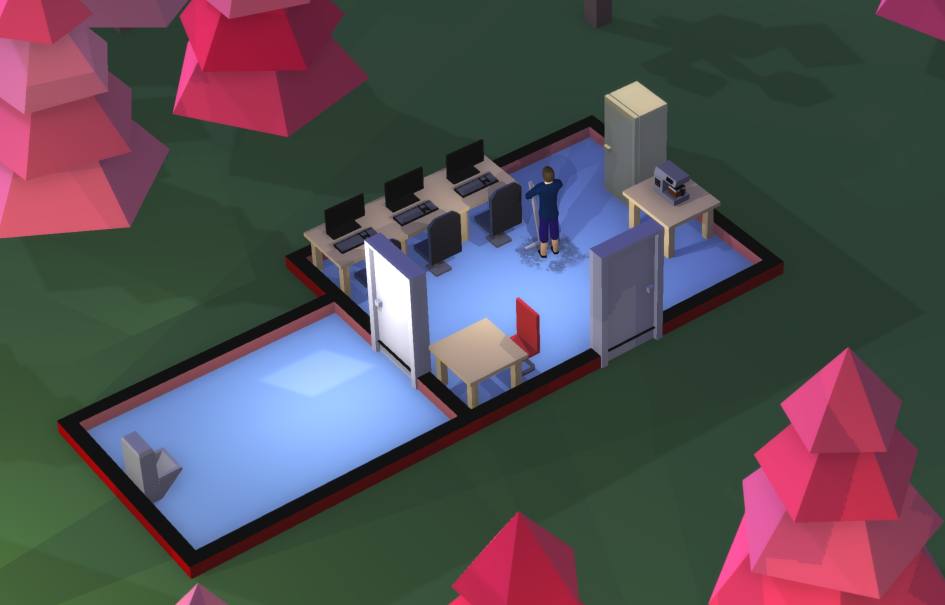 This screenshot showed off the wall lowering toggle. At that time the walls were lowered by physically scaling the 3D model, which resulted in small slivers where the windows were and light would shine through where the wall used to be. It is now based on a shader, which renders the wall invisible over a certain height, so there are no slivers and light will not shine through the wall. The new dirt texture still looks more like puke than dirt, though.

Finally, don't forget to enter the competition. Not many have entered, so there's a big chance of winning!

A core mechanic of Software Inc. has been replaced due to popular demand. You can now make buildings free form.

Software Inc. is releasing on Steam Early Access today! And coffee, why not.

The latest version of Software Inc. features an entirely new traffic system, which includes being able to build roads and parking for your employees.

Software Inc. has been Greenlit and will move to Steam very soon. A lot of features have been added to move from pre-alpha to alpha 1.

This is the Hardest game to find on google, because of its name "Software Inc." Type it in the text box, then thousands of software company will seen -_-

Im translating the game to Portuguese and so far I didnt find the tutorial to do the translation. It's possible to translate the tutorials yet?

Abssolutely wonderful game. I've enjoyed every little bit of gameplay so far and cannot wait for more to come. One of the best simulation games I've played in a while. As it is in early access I'm sure more features are sure to come. I only ask that Coredumping continues to develop Software Inc.

Fit For a King Realistic Sim