SlothDrop is an addictive and fun reverse platformer game where you control an adorable sloth's fall through the clouds. Hit fluffy white clouds and pink clouds to slow your fall, but be sure to avoid thunder clouds and predators! Falling slower increases your score, and you can fine-tune your sloth guiding abilities to obtain all of the upgrades, in-game achievements, and set new global high scores. Do you have what it takes to be the best Sloth Dropper in the world? 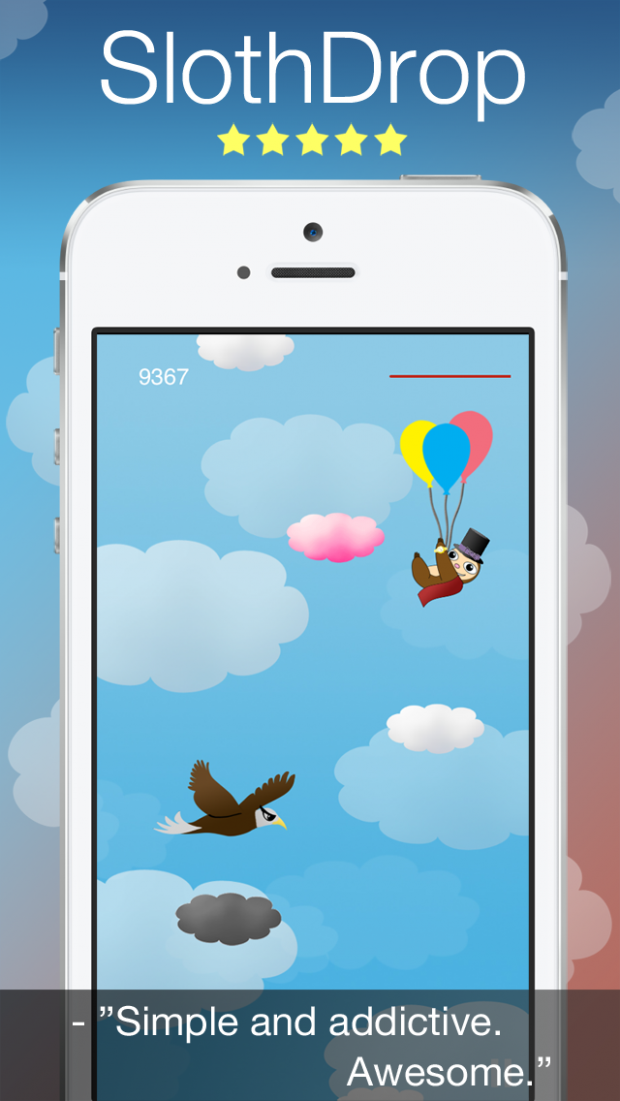 SlothDrop is a simple and addictive platformer type game where you are a cute sloth character falling through the clouds. The free version of the game was just released and below is a quick summary of the game's foundation:

Summary:
- You are a cute sloth character in free fall.
- Tilt your iOS device to move your sloth left and right.
- Hit white clouds to slow your fall.
- Hit pink clouds to bounce upward.
- Avoid thunderclouds, hitting enough of these will cause you to lose.
- Tap the screen to defeat enemies as they appear.
- Survive as long as possible.
- Compete with friends and players worldwide for high scores.
- Collect power ups and coins during gameplay.
- Use coins to unlock upgrades and customizations.
- Use upgrades to help achieve higher scores and unlock achievements.

The first release of SlothDrop was in April 2013, and I have spent much time since then polishing the performance, gameplay, and artwork. You will find that SlothDrop has several advantages over competing platformer games, including the clean and colorful artwork, a selection of upgrades to customize your gameplay experience, and the uniqueness of being a reverse platformer game where the user falls instead of jumping up or flying sideways. The full version of the game is $0.99 and the free version of the game includes the same gameplay but with less upgrades. Below are useful links for you to further explore SlothDrop.

The first 20 people to email me at maroliappdevelopment@gmail.com with the heading SlothDrop will receive a promo code to get the full version for free!

SlothDrop 4.0 gets new upgrades and more!

SlothDrop 4.0 includes over twice the number of upgrades as the previous version, along with a new enemy and graphics improvements!

SlothDrop has been updated for iOS 7! Update 3.1 features a cleaner background art style reminiscent of iOS 7's design and adds a much needed in-game...

Guide your Sloth's fall through the clouds while avoiding predators customizing your sloth to earn in game advantages. Download SlothDrop on the App Store...