As was in the original, players must seek to strike a balance between a powerful army for defeating enemy Kingdoms and Khwyzans and a viable economy for sustaining the former. The definitive marks of Seven Kingdoms: Ancient Adversaries (SKAA) recur in Fryhtan Wars (SKFW); Gold, Food, Reputation, Population, Loyalty, and Espionage. The human population may be subdivded for various tasks; to produce food, to build, to research, to spy, to work in mines and factories, or to conscript into the army.

To promote Seven Kingdoms II: The Fryhtan Wars and grow its popularity (top games), use the embed code provided on your homepage, blog, forums and elsewhere you desire. Or try our widget.

Command the Free Peoples of Middle-earth or the evil Minions of Sauron in two brilliant single-player stories. Battle up to 8 players online in intense...

The Protectors is a stand-alone mod of the game Warlords Battlecry 3 (i.e. it can be run without having the original game installed - 100% free full game...

In this action adventure tale of historical fiction, players take on the role of Morgan Black and his family, struggling against the hostile wilderness...

Wars and Warriors: Joan of Arc

Are You Destined to Free your People from the Hands of Tyranny? The year is 1337. During this, the darkest of ages, the bubonic plague was rampant. Kingdoms...

In a perfect world, people wouldn't need gods. But perfect worlds can't exist and sooner or later someone, in trouble, desperate, will pray to the heavens...

King under the Mountain is a simulation-based strategy/management game where you design, build and run a settlement in a fantasy world. Then, once you're... 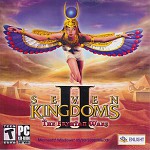