Second Chance Heroes is a cooperative arcade action game that takes place in a world overrun by apocalyptic disasters! Made weak by over-exposure to kitten videos, reality TV and ironic photos of bacon, the citizens of the modern world are entirely unprepared when the end of the world arrives! Unable to save ourselves from evil robots, nuclear missiles, sentient fast food, alien invasions and hordes of the undead, our only hope lies in the past. Put together a dream team of cloned heroes drawn from throughout human history and use them to push back the apocalyptic tide! Or don't and just let the zombie chickens eat your face.

Second Chance Heroes for iPad (2 and up) and iPhone (4S and up) will be available to download from the App Store on February 17th, 2014. 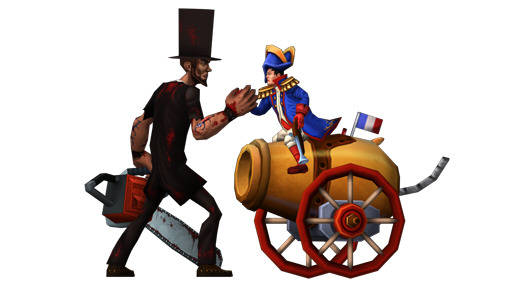 We're a cooperative action arcade game where you collect and play as clones of historical figures to fight an apocalypse of the absurd. If the idea of a tiny Napoleon riding a cannon, Marie Curie firing laser beams for her eye, or Abraham Lincoln with a chainsaw amuses you, then this is the game for you.

SCH is also in development for Mac and PC as a separate, stand-alone product. We would appreciate your support on Steam Greenlight to speed that launch along!

The Old Master is one of twelve playable characters in Second Chance Heroes, a cooperative arcade action adventure coming to the PC and Mac later this...

Abraham Lincoln With A Chainsaw

One of four starter characters in Second Chance Heroes, find out how this President takes on the apocalypse in our cooperative arcade action adventure.

One of 12 playable historical characters in Second Chance Heroes: Julius Caesar is the game's fast action boss killer with a multipurpose ghost-like twist...

We recently revealed Montezuma as the ninth Second Chance Hero playable character. Here is a brief developer diary on what he adds to the game.

Want this game so much! Looks hilarious!