In this game which spans many worlds and many conflicts, the story follows Jayde, a young girl who incidentally encounters the power of rebirth, Phoenix Fire. Alongside her childhood friend Askari and the austere huntress Khalira from the neighboring tribe, Jayde embarks to discover the enigmatic origins behind these powers, as well as those behind the cycle itself and its existence.

+ An immersive, unique world which subverts the typical "medieval fantasy." A plethora of different areas and landscapes are present all throughout.

+ A simulated Chrono Trigger-esque battle system where battles occur in real time, in the real world. Conditional turns emulate the beloved style of Final Fantasy X, where the Ardor Mode system, which allows characters to shift between different emotions, gives the game's battles a unique flavor. The best part: No random encounters!

+ A complex yet understandable story with immense attention to detail. Lore, philosophy, and intrigue are present at every corner of the game's narrative. This game also pays special attention to avoid both the narrative cliches of RPG Maker games and of RPGs overall.

+ A hand-crafted combination of linear gameplay, akin to FF and Tales, and liberating openness, like Xenoblade Chronicles. Opportunities to explore, complete quests, and log monster kills are always available.

+ Several supplemental systems are also present in the game, such as quests, specialized skill learning, action gauge/stamina system, and many others.

There is plenty more planned as well!

If you're interested in my game, feel to drop a thread over at the forums/send me a PM to let me know your thoughts! My #1 goal is to subvert the typical RPG Maker game and make this one something truly unique; hopefully that will be realized once I near its completion! Happy game-making!

Thanks for stopping by the ST thread! Things are a bit slow atm, but I'm gradually beginning to tidy up the page and add some more up-to-date screenshots of what the game has to offer. If you have any preliminary questions or comments about my game, feel free to make a thread in the forum or send me a PM! I like to think I'm highly responsive to all forms of feedback.

Anyways, I'm currently working on Version 1.2 of the demo, which features the first area of the game, as well as its first two chapters (one being the prologue). While the demo will dabble with the story, it's first and foremost a tech demo to introduce players to the genre of adventure RPG-ing that is Samsarian Tale. The demo will feature an hour's worth of story, another hour of questing and exploration, and plenty of optional scenes to check out; in other words, it should be a great taste to what the rest of the game has to offer! Look forward to the demo sometime within the next 1-2 days.

Aside from the demo, the current progress of the game sits at about 20%, maybe a little bit more given that most of the features have been fully implemented and the stories/areas have been conceptualized and storyboarded. A lot of the day-to-day stuff is busywork, either in the editor or in photoshop, but it has to get done either way!

Stay tuned y'all, and look forward to an update coming soon! 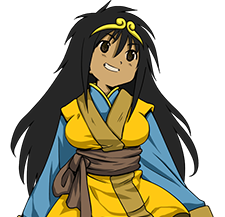