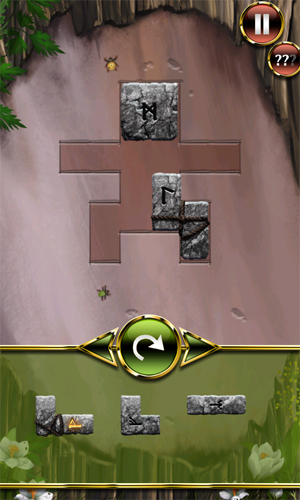 The puzzle is based on a simple technique – the player’s supposed to place differently shaped runestones on the game board. Simple gameplay and easy controls make the game suitable for a wide range of players of all age or smart phone experience. Completing boards also trains spatial imagination.The game offers several different modes that the players can switch as they wish. The game content is therefore created by the players’ decisions. It’s up to them if they pursue the epic story of great wisdom hidden in the runestones or to think hard about finishing a round with as little turns as possible. Action players may appreciate the swift time mode or compete with their friends in the multiplayer mode.

The background story as well as the stylization is based on the old Norse legends. The game puts the player in the position of a follower of the God Odin and leads him through fantasy worlds in search of an old wisdom that the runestones keep.The story’s being told by elaborate hand-drawn tableaus that familiarize the player with places and personas from the Norse mythology. He meets the legendary tree of Yggdrasil, the omniscient Norns or the wise giant Mimir. Only the bravest and clever can reach the journey’s end.

Thanks for voting and helping Rune Legend on it's quest to become the 2021 Indie of the Year. You are now in with a chance to score some free games. Help this game secure more votes by embedding the widget (or link) we have included below on your favorite sites.

! That Bastard Is Trying To Steal Our Gold !

To promote Rune Legend and grow its popularity (top games), use the embed code provided on your homepage, blog, forums and elsewhere you desire. Or try our widget.

! That Bastard Is Trying To Steal Our Gold !

It's a fun puzzle game where you need to steal all gold at each level. Steal gold from the Lerpikon's dungeons! Get rich!

Unknown Castle is a puzzle adventure, where you explore your old family castle, controlling 2 characters helping each other.

Main game play focuses on rotating each gear. You have to set them in the right position. Sometimes, they affect each others. For instance, whenever you...

Momotaro: The Tale of the Peach Boy

Help our hero Momotaro and his allies in their journey to the Oni Island! Revisit the classical japanese legend of Momotaro in this color-match puzzle...

Runes of Camelot is a match 3 game that takes you on a journey through the Avalonian world. You can choose either Amelia (Merlin's magical apprentice...