In 1997 Quake II was released ending the Strogg's collective leader the Makron being killed. Quake III moves away from the Strogg, but the universe's worst cybernetic foes return in Quake IV, ready to be destroyed yet again by Earth's forces. Quake II left the Strogg home planet without its planetary defenses, leaving it open for your attack as part of Earth's new armada. You help deliver the final assault to the Strogg as Matthew Kane, member of an elite squad fighting along squadmates with vehicles and advanced weaponary. Quake IV is based on the Doom III engine, although it is apparent that Quake IV will be a superior modding platform thanks to iD and Raven's efforts in optimizing the netcode, adding vehicles, and general fixes made to the engine since Doom III's release.

Ice cold steel and dark corridors - that's how our leadmapper Elusive's side project of the same name presents itself: "Cold Steel". You may look forward to solid brushwork, well placed weapons, as well as a whole army of nasty Strogg, who arm themselves in neat cutscenes to show you what they've got. Finally our members Mantikor, Dreyseth and Waran helped completing the singleplayer map with custom-textures, -models and -sounds. You can grab Cold Steel here and start in your digital crusade against the Strogg right away. 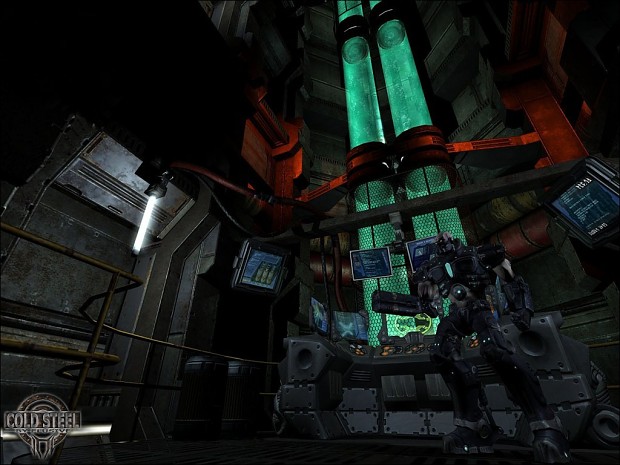 how it looks Youtube.com

Negatives:
- Some triggers were weird. At one point, picking up a pack of shells unlocked a door across the room, and an "open door" interactive panel turned on a lift halfway across the map - the "activate lift" screen just wouldn't work until the seemingly unrelated door switch was pressed. In the same vein, the lift couldn't be recalled, so jumping back down to the lower floor made the level unfinishable.
- Inconsistencies - some unlocked doors had red lights, making them seem locked. This led to some frustrating times trying to figure out where to go, since everything looked locked.
- Visibly spawning enemies - One scene with an enemy spawning directly "behind" you comes to mind, but there were a few other instances with enemies clearly appearing out of thin air.
- Frustrating environmental deaths - Getting killed without any warning by a falling beam is just irritating. The number of explosive barrels might have been a little excessive too.

I'd say 6/10 - I'm glad I played it, but there was definite room for improvement.

One of the better single player map mods for this game.