It's a fast-paced, team-based, multiplayer space shooter with RPG elements, a well-fleshed backstory, and plenty of ambition for up to 50 player.

Features:
- Select a ship from a range of style and classes.
- Choose Upgrade Parts or Advanced Technology for your Ship
- Explore randomly assembled maps or get on your favorite position in fixed scenarios
- Mysterious Asteroid Fields, forgotten Moons or space waste depony
- dynamically changing level according to player actions
- Form Up to Squads to accomplish the mission targets.
- Protect your Homecarrier and make sure your fleet get enough ressources to continue the production
- Take out enemy carrier stations to gain advantages or destroy the carrier itself.
- Help out other Fleet Members with Support Class Ships or set up a mine field with a skirmisher class ship
- Several Mission Types: Engagement, Capture The Probe, Carrier Assault,...
- Planned Clan-Functions to maximize strategy and tactics - Ranking and Challenge Functions
- React on critical game situations to turn the lost battle back to victory
- Gentlemen Agreement Mission Mode for Beginner Pilots

Project & Status
We are working on this for one year now. The Project Team Headcount is currently 5.
In case your talent want to join up this scifi addicted group there is a playable Alpha Version available
for demonstration.
Because of this "unfinished business setup" we can not assure paid work.

Release Planning
The early state is to release the game as Free2Play with all ships and modules you can get - strictly no pay to win. To get the server costs back we plan to release a Pro Version with some extra features like Clan Play, Setup own Server, Closed Games, Ship Editor to build up your preferred ship type, change Faction etc

a special gamedev version of the gameclient will be released for the conference visitors. 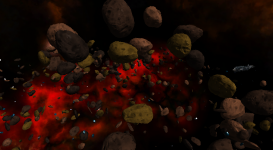 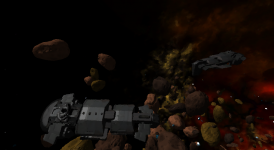 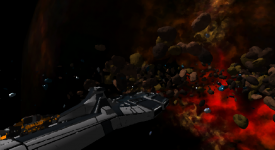 We show recent progresses in the gameplay and map setup section.

We show recent progresses in the gui interface section,texturing and level setup.

talents and skills we are currently looking for ....

if you need music I would love to help.

Looks pretty fun. I'll be keeping my eye on this one.

Looks cool! I really like the atmospheres and the color palette.

hi Insolent and thank you !
for the moment all map textures are dummy objects so there might be some pretty heavy changes here because we plan to do cel shaded graphics in the end.
Iy you have ideas or suggestions to that topic feel free to add you thoughts ...

This is just my personal preference, but I personally don't care for cell shading in space games because I find it gives an overly cartoony feel. I'm sure others feel differently, and your execution of the style may be different from what I've seen. I like the current textures for asteroids, and somewhat higher res versions of the textures on the debris and ships would look good, I think.

the textures of the ships will be improved - in fact the showed material includes Ship Objects with no texture at all and the Rogue Fighter from the Alpha Video was done very quick n dirty.
In the next update you will be able to check again the new 4096 Ship Textures as well. Thanks again for your comments ...

Oh cool - sounds like you have good things in store for the game visually! I'll be tracking it.