Operation Flashpoint takes place in the 1980's. Player must fight soviet forces on 3 large 100km islands as an American NATO soldier. Man vehicles such as aircraft, cars, tanks, and boats are driveable and commandable. A mission editor and other tools are also available or already built into the game itself. 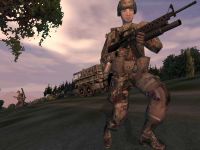 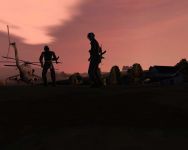 Operation Flashpoint or ARMA Cold War Assault is an award winning 2001 combat military simulator for the PC that was developed by Bohemia Interactive, and published by Codemasters. Built on the Real Virtuality engine, it was a realistic simulation that featured a single player campaign, multiplayer capabilities over LAN & Internet, and even included a mission editor. Later on in 2001, Operation Flashpoint had 2 expansion packs named Red Hammer and Resistance. It later received a port under the name Operation Flashpoint Elite on the Xbox.

But I already own Operation Flashpoint?
The good news is, Bohemia Interactive offer a FREE patch/update called "1.99" for those who own the original Operation Flashpoint (must be updated to 1.96). Just make sure you own and have your original CD key of Operation Flashpoint so that you can type it in when you install the patch. Head on over via this link to the update and follow the online instructions:
Community.bistudio.com

Too bad that original CD key of Operation Flashpoint cannot be activated on Desura.

If you have the original CD installation and CD key, then all you have todo is install OFP and then install the patch. The patch will usually automatically detect your CD key, or you type it in. It just means you will have to play without Desura support.