Last weekend was a tough one, I'm going to explain y'all about it, but since it's almost Christmas I'll say it in a poetic way:

One day, little Rodrigo was lying on his bed,
out of his shirt, there was his tummy,
it was growing fat 'cus of the french bread,
he is surely turning chubby. 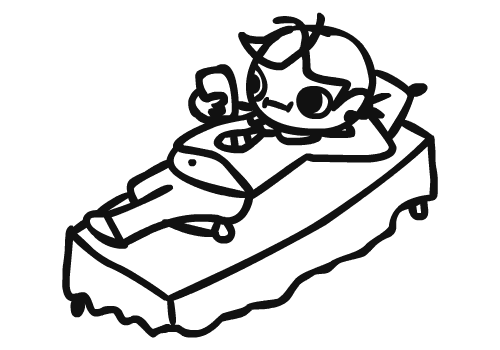 After minutes of scrolling he saw a mail
"Oh shit! A Ludum Dare jam!" said after looking his phone
I think it's a good time to make a game,
thank God it begins just when I get home.

He gets ready for the event one day before,
Grabs-n-picks two bottles--four liters of Coke,
he pays and gets out of the store,
"Man, this is so much, I'm surely going to choke!" 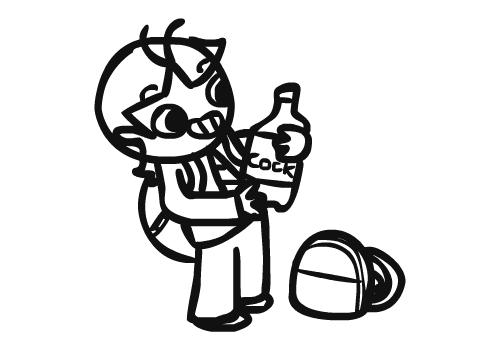 He goes on his way, exhausted, for all he had to carry,
a computer, books, clothes and bottles of Coke,
he took the bus and walked through a forest that was scary,
"It's creepy, really! I'm doing this at nine PM! This is not a joke..." 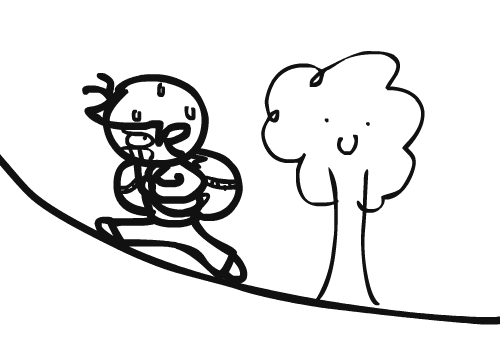 ...Well, actually it's because he's a pussy,
but when he crosses that road he gets pride:
he does fourty minutes of bus and thirty of bus, not that cushy.
After walking with his stuff he finally gets to arrive.

He puts evertything in order to get ready and takes a photo 'cus he's a wench,
finds out that the jam begins at three AM for him,
"Gee, that's what I get for trying to be french,
well, I should begin with energy so I should go to sleep".

Nevermind because he had a dinner that he had to attend,
"Crap, something always turns up when I have to jam!"
He goes and always looked to his watch, until the end.
"Fuck... I need to sleep because of how tired I am..."

The moment finally comes but he still sleeps like a champ,
it's past three AM, but he is still tuck
eventually, from nowhere, on his leg, he gets a cramp
"Aaaaaghhh! What the hell?! It hurts! Fuck!" 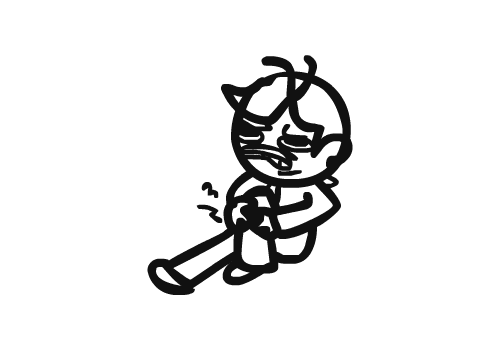 After crying like a bitch, he manages to climb,
he reaches his watch that was on his right,
"It's already six AM! Look at the time!
So he just runs to his computer and logs to the site.

"You Only Get One..."
The jam theme was finally announed, as it said one sign.
"Wow, you guys really chose stupid shit for a jam"
He had to hurry to think for a game to design. 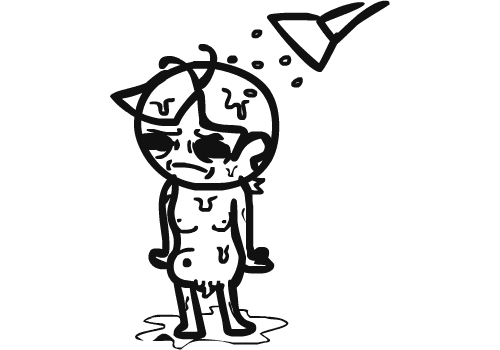 "You only get one.... soldier?"
Even he knew that the idea was crappy.
He began the project and saved it on a folder.
It was bad, but didn't matter 'cus it made him happy.

Cokes down,
codes up,
he used new tricks that he learned by playing around,
worked nonstop until he finished his cup. 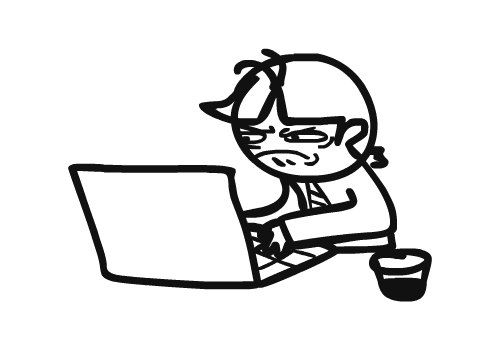 One day goes,
the other one is on, stressed as fuck,
he wore the same clothes,
I think they even had muck.

After testing his game, without knowing why, it crashes,
"No, no, NO! What the hell?!
All I've made is going to be trashed!"
The faggot was so mad that he began to yell. 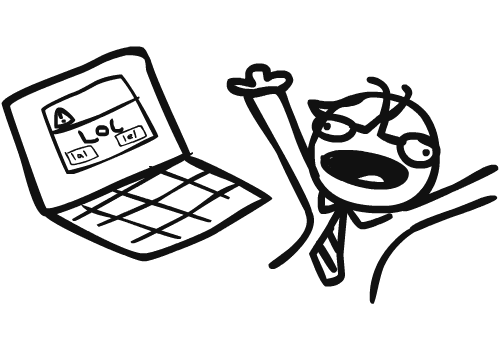 After toying around he fixes it on a whack,
"I don't even know how"
It's okay now, but he almost had a heart attack.
"I feel like the best coder right now"

After a while more he finishes,
"I can't feel my brain...."
He has to take a shower 'cus he smells like the fishes.
"It was a pain, but good as hell! I'll do this again" 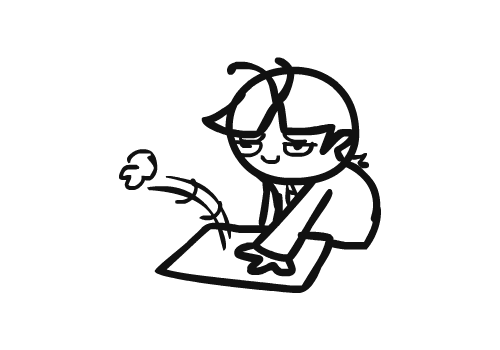 Even if you understood or not, that was my experience through the Ludum Dare 28 jam. It's the first jam game that I can consider "not a complete piece of crap" and I'm really happy about it.

TALK ABOUT THE DAMN GAME ALREADY. CAN WE?


So, again, this is a game entry for the Ludum Dare 28 game jam, a challenge where you or any other developer struggles to create a game with a selected theme in less than 48 hours. This jam's theme was "You Only Get One"... Really? I'm so pissed by how closed this theme was, and I'm not taking just for myself, you should have seen Twitter at that moment. 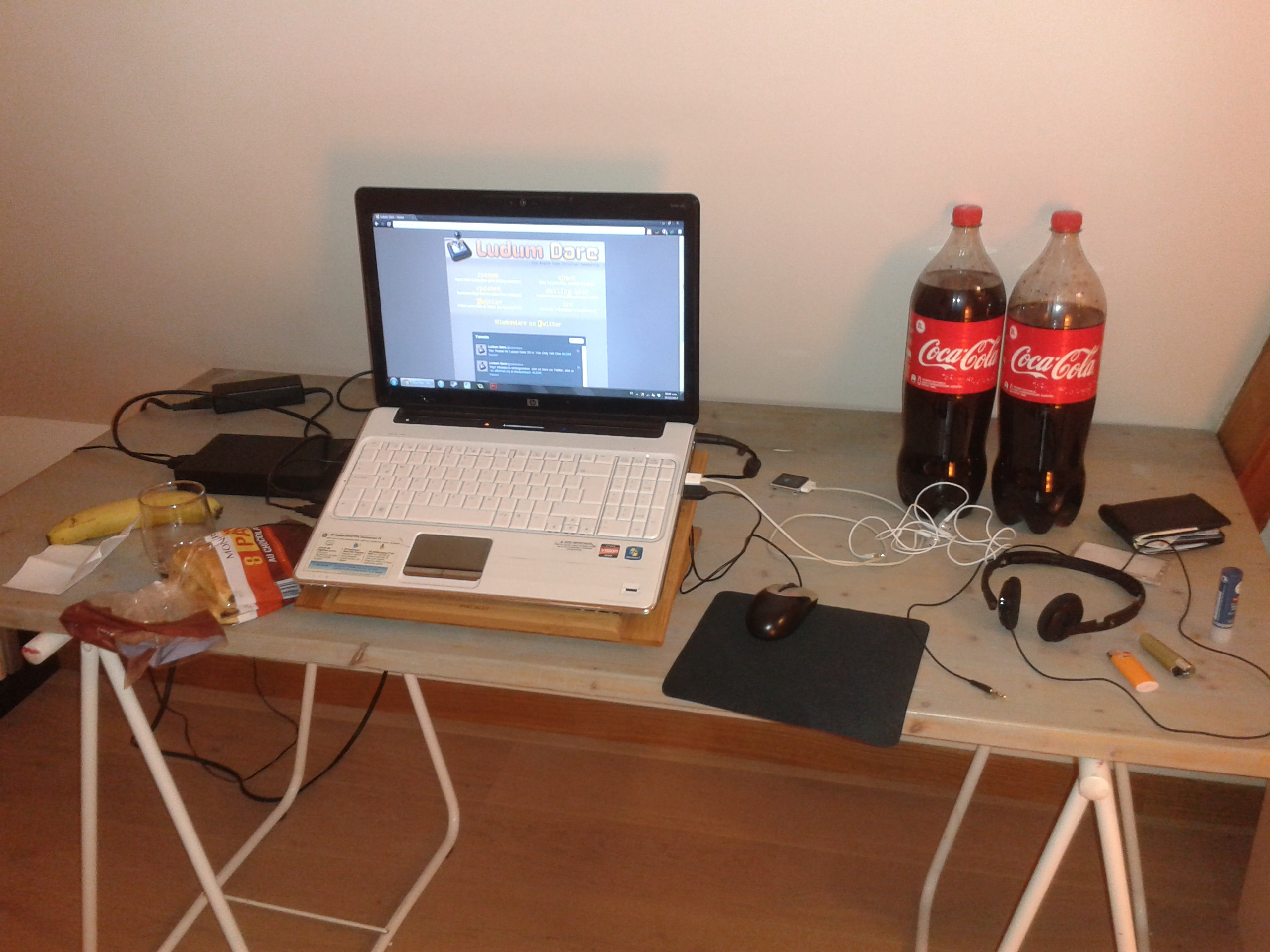 Anyways, I worked on a little title called "One Man Army", which appeals to the jam's theme as "You Only Get One... Soldier!" To me, the idea of one soldier versus a whole army isn't that bad, but when you put it into a game... it's very cliché.

You can't learn much about the game's story because I didn't have enough time to put it into the game. So let me tell you a little about it:

The game takes place on a country called Republic of Chekolosgeria, which is in war. The only problem is that they only have one soldier (giggle), so these folks right here, the Doctor and the General take their only soldier, Duffy, and convert him into a super soldier... Duffus! 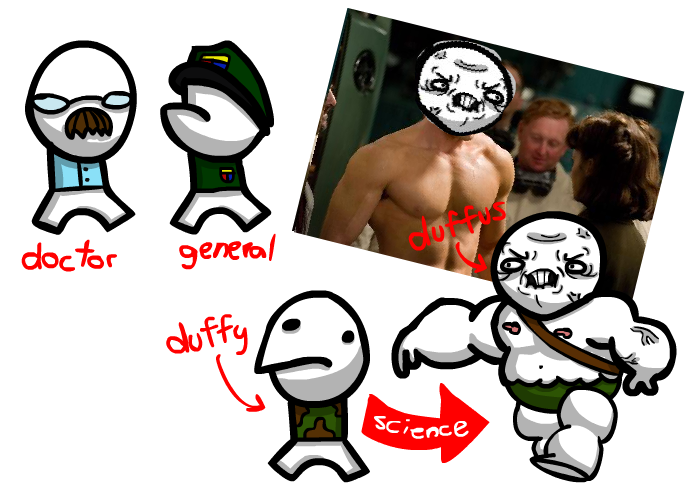 Smart-ass, award-winning idea. About the gameplay, it was going to be completely different, but then I changed my mind during the development of it. Right now it looks like this:

Basically, all you have to do is slap the enemy soldiers so the burst and explode all their body parts.

I'm so happy with how it ended looking. I knew the explosions and body parts flying around was a very important thing to add to the game so I had to learn how to use physics. Yep, that's the first time I ever used physics on a game and it probably took me more than half day to just make the physics.

It's a great thing to have on any of your games, remember: your game can never have enough particles.

That's it I guess... You can download it here:

But here's the link to the Ludum Dare entry so you can vote for it to win if you liked it. I really don't expect to win because I think the idea is really dumb, not original and not really appealing to the competition's theme at all but do what you feel like.

Thanks again for reading yet another long post of mine, finishing this game felt so great for me, you should really try the next Ludum Dare if you don't know it already. Anyways, I'm out.

Version made through the Ludum Dare 28 compo. Might be missing a couple things and a few bugs but it's what I managed to do in less than 48 hours and...