Play as a protector of the innocent, born to defend small businesses from large corporate takeovers in a side scrolling 3D brawler. In a city that never sweeps, you take control of Omega Hero in a mission to clean the streets of the rotten Dust Bunnies and their evil employer Mr. Boss. 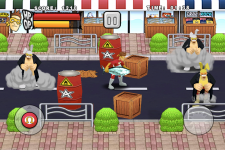 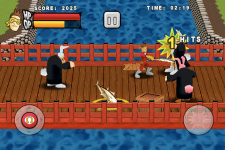 Omega Hero is NOW available on the iOS App Store and Android Market.

From the Press Release:
Crazyrockcreative.com

CrazyRock Creative is releasing Omega Hero for Android and iOS. In Omega Hero, you cleanse the streets of the rotten Dust Bunny henchmen under the employment of the evil Mr. Boss, keeping small businesses safe from forceful corporate takeover. The game will debut on July 4, 2012 for $.99 cents. CrazyRock Creative announced the release this week from its bachelor pad headquarters to friends and family.

The game was created by twin brothers on a quest to make a game that was simple, fun and easy to play. "Crazy Phil" and "D-Rock" are game development instructors at Full Sail University and used their experience to craft a game for all ages. "People can't seem to find a good side-scrolling brawler on mobile devices. Well, we're bringing side-scrolling brawlers back," said the twins, owners of CrazyRock Creative.

Hehe Very nice! Looks like a very fun game to play. I'll be sure to find it in the app store!