An introduction first. This is a game that I've just submitted to the Steam Greenlight catalog because with the feedback that I'm hoping to collect, I'll decide if I should officially release it.

The Steam Greenlight page is at Steamcommunity.com

Please do rate the game up if you like what you see and want to see the game released :-) Your feedback is invaluable. 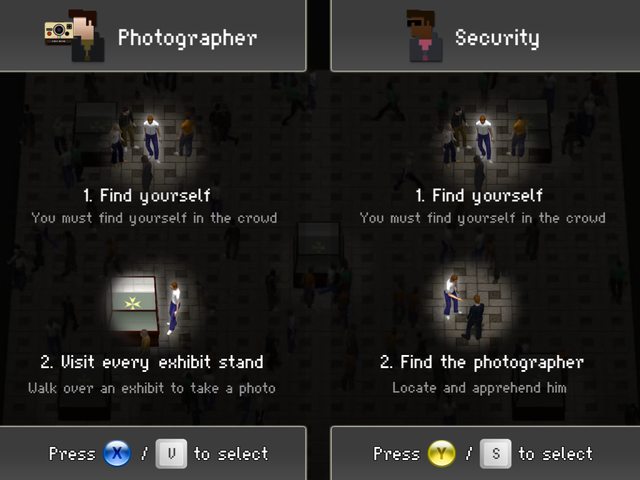 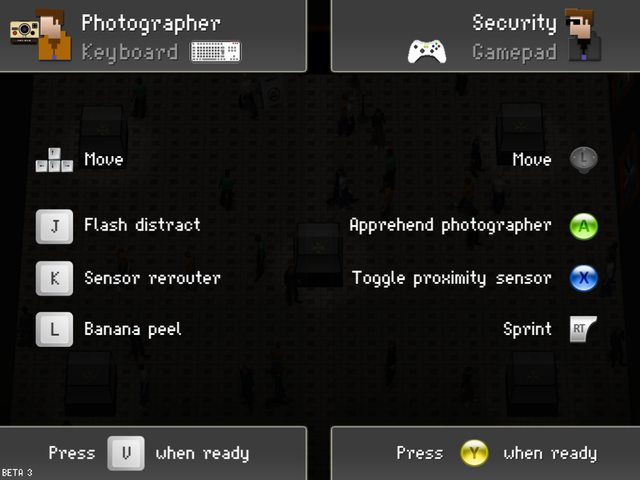 Before a game session is started, the players choose their roles. A player can select a role using either the keyboard or an Xbox controller. The game also supports two players on the same keyboard. After both players have agreed upon the roles, the game is launched.

If this is the first time the game is run, the players will be greeted with a small introduction text advising them to play through the In-Game Tutorial before playing their first game together.

Once the game is started, the first thing both players need to do is to identify their avatars from the crowd i.e. finding themselves.
The player being the Photographer then needs to take a photo of all the exhibits in the museum by visiting them to win the game, while the player being the Security Guard needs to apprehend him. It is up to both players’ interest to keep a low profile while blend in with the other AI-driven museum visitors.

To better increase the chances of success, both roles incorporate three abilities each. The abilities are designed in a way as to directly oppose each other.

The second ability is Sprint. Sprinting increases the Security Guard’s movement speed for some time. This enables him to easily catch up to the Photographer once identified.
The third and final ability is the Proximity Sensor. The Security Guard can toggle the sensor on or off; each game starts with the sensor turned on. Toggling the Proximity Sensor’s power should be used strategically when pinpointing and/or flanking the Photographer.

All of the abilities are driven by cooldowns, and the cooldown periods vary between each ability. 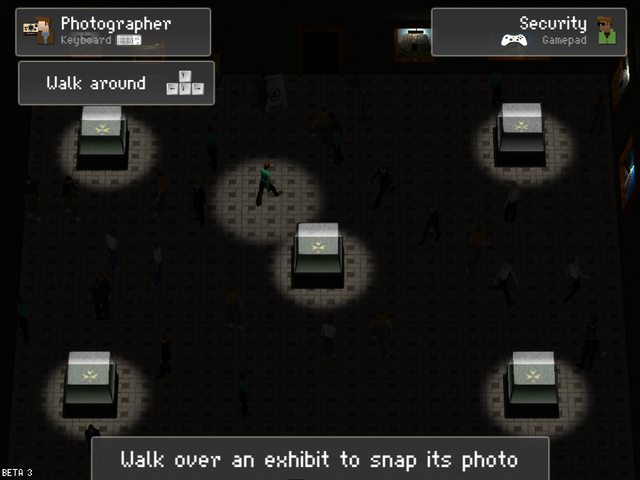 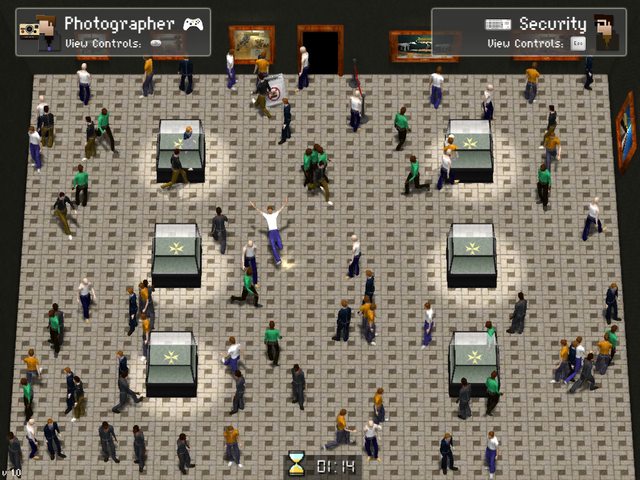 A current limitation of No Photos, Please! is the fact that the game is playable on a single machine, which means that you can only play it if you have friends around.
One thing which I think could really make the game take off is the addition of online matchmaking. Unity provides a Master Server service which would allow players to host their own private/public matches online and join other private/public matches, all hosted via the Master Server.

This would help create a fantastic multiplayer experience

But something that would really be interesting is to have a Cheats & Modifiers screen accessible from the Main Menu that lets you 1) tweak various Boolean modifiers [No Timer (allhours), etc…] and 2) enter secret codes to activate in-game secrets and cheats.

To promote No Photos, Please! and grow its popularity (top games), use the embed code provided on your homepage, blog, forums and elsewhere you desire. Or try our widget.

Imagine if the Soviet Union hadn't collapsed and instead made a decisive advance into Europe. NATO forces clash with the Red Army and a second front is...

Men of War takes place in Europe and North Africa during the height of World War II. The story takes place over three different campaigns and players...

It is the 41st Millennium in Sub-Sector Aurelia, a cluster of worlds on the edge of the Galaxy, and a battle of epic proportions is about to begin. Ancient...

Neighbours from Hell is a strategy video game for Nintendo GameCube, Microsoft Windows, and Xbox. In Europe, it was released for Windows on June 20, 2003...

Joint Task Force is the real-time strategy (RTS) game where you command the frontline forces in tomorrow's most hazardous conflicts. Lead twenty dramatic...

Abduct. Enhance. Battle. PROFIT. You're an alien that abducts humans to build the most powerful gladiator team in the universe! Surgically enhance your...