Take on the role of Karl Carbon, an ex-cop turned social worker charged with helping needy humans, hybrids and sentient machines AKA 'Silicanths'. Dishonorably discharged from the Coastlandia Police Department for disobeying an order to shoot an unarmed alter-human, Karl has been helping the poor and downtroddent get back on their feet at the Department of Sentient Services. Till one day a case goes horrible sideways and and Karl is drawn into a sordid conspiracy that could threaten the very fabric of Human-Robot-Hybrid civilization. 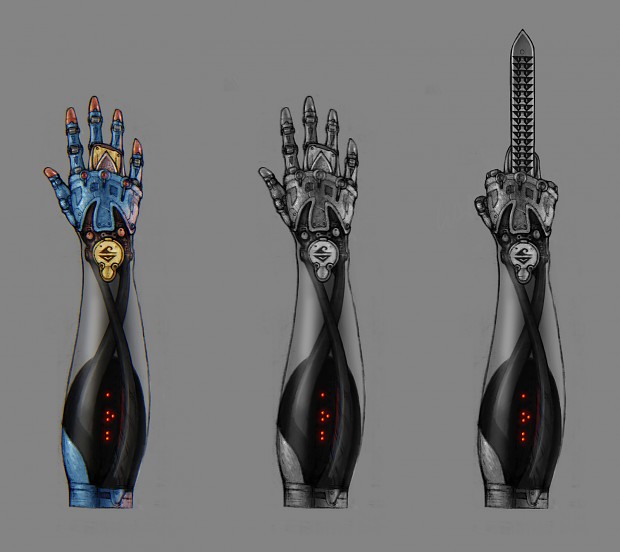 This particular iteration of Mr. Carbon's prosthetic is a future upgrade, the "Ono Sendai 8", if you will, or possibly the prosthetic of some more advanced organism. Steal it from the trunk of some robomobster's flying limousine.

Or maybe, beat the game on "Gibsonian" difficulty setting, with only 3 mb of hot RAM, and no ice breakers, and you get this bad boy dropped in your inventory on the new game+. This is like a Tesla Roadster of cyborg gadgets, something that a top-tier SpaceX executive might voluntarily amputate his own limb for, in order to have it addended in time for his Ted Talk. The beaker-grown, six million dollar assassin, the "special something" guy / gal who comes after Carbon, after he spills red ink on the wrong balance sheet... He rocks this arm.