It's the 15th anniversary year of Myth II Soulblighter. Here's the latest in chosen mods and plugins both new and old that you should be trying. Third up...

If you look at good mods you'll find they fall into one of two categories; simple but effective and big and complex. Of the complex ones you'll have complete game changers and partial conversions. We'll do the first and former at another time, for now we'll concentrate on the latter. 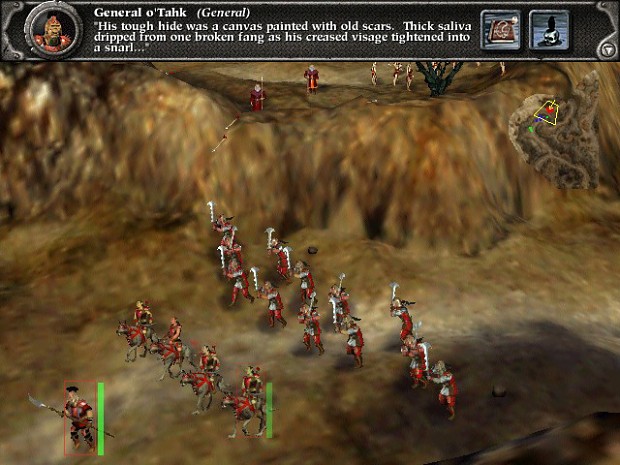 The Seventh God is a big mod. Certainly back around it's time of release. It has new intros for levels, backgrounds, a new intro map, new units, new formations, new attacks, new maps, new music, new voice acting, a level that was one big cutscene (the prologue level), and simple yet absurdly difficult and taxing solutions to maps. And the worst Scottish accent ever, worse than Scotty! All these things were common place in mods (CS and DoD were already around for comparison), very few had a reasonable story arc and were single player. In terms of Myth, this was the first real time that anything outside the 'marching army' standard of medieval warfare had really been done. Though the game had visited WW2 - and would go onto Vietnam, Mech Warrior and Aliens - the rough standard for all SP maps was the same regardless of scenario. The first two playable TSG levels are both siege levels. Sure, first round you take a small patrol out and then come back to the castle but from there you not only have to fight a large defensive battle, you have to then integrate your force with the existing defenders and search for a balance. Do you take out forces in the 'keep' area, assuming you took care of your own assailants, or do you fall back within the walls? The Second map forces you to defend a small palace and the working Warlocks against a seemingly unending force of Goblins and Bezerks. Do you hold the high ground, or go down and engage? Do you do a mix of both? Do you save all or make sacrifices? Decisions, decisions. And thus it was this that made The Seventh God such a wonder to play.

I must admit, I avoided the story and cutscenes as much as possible. The weary, doomed voice that crashed over the top, copious amounts of ham and cheese melted into it. Something about that just put me off. So I hit space bar and garnered what I could of the story from the game. Story wise it's nothing amazing. Goblins have gradually grabbed more and more land, come out toward other kindoms, are attacking stuff, you have to kill them...it's like that of Myth without being that of Myth...if you get the drift. It's also pretty a convincing fit as a result.

Set after Myth II (if this were cannon it'd be the last in the series) it does a good job of reworking existing units from the game and repurposing others. Bezerks are the men of the north, the Warriors have grown into Legionaries, the Warlocks are no long insane deciples of The Deciever and are in the wider world at large. In turn Ice Warlocks compliment the original Fire Warlocks giving a nice complimentary magical attack for each other. Shields can now be raised to defend against incoming arrows from certain sides and there's even links to previous maps released by Creation, at least with one character anyway. And yes, archers are still string happy idiots. Not everything changed, not everything had to.

Still worth downloading though.

Not all plugins and such are compatible with each other. For the best, most probably easy running make sure that the TSG files are the only plugins loaded.