It's the 15th anniversary year of Myth II Soulblighter. Here's the latest in chosen mods and plugins both new and old that you should be trying. Fourth one...

It's a mixed bag this time round. You see last time we had The Seventh God which is a massive conversion. 18 solo maps, hosts of new units, RPG levels and violent deaths galore. To follow that over indulgent feast of playable art is a collection of several smaller snacks and cereals, a collection of little interchangeable plugins that you should at least try, two of which should always be turned on! 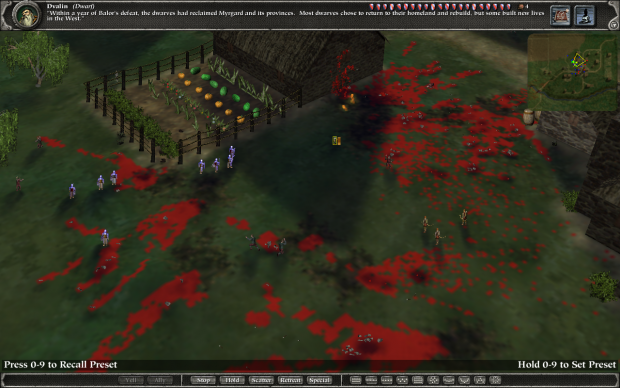 Do you lovingly remember DK mode from Perfect Dark and GoldenEye? Have you an addiction for Rats maps in games like Counter Strike? If so then this simple little plugin is for you. Unlike the majority of mini-unit mods for masses of games out there this one is well balanced, and by that I mean it's not just tiny units. Ranges, movement speeds, damage and health have all been appropriately scaled. Gore and gibs haven't and that's for the better because the amusement gained from tiny little characters popping and exploding and splattering all over the place when you let loose the dwarves is immense. You will find however, that with the mod in place it makes play very slow. For recommended best results play on double (minimum) or 4x speeds by pressing F1 and F2 to skip forward and back. This more than makes up for the scaling, it also makes it look slightly silly and largely ridiculously funny in larger battles. Well worth a play.

The idea and implementation is pretty simple. Make blood run down terrain and models, with the same force and speed that the orignal attack hit it with. You wouldn't think that would do too much to enhance the game would you? You'd be wrong, so wrong it's untrue. It's easy to ignore damage effects in games, but as games such as Deus Ex showed it is tiny tweaks that can make a good game better. Load up a Dorf Riot map with the plugin loaded. Play willow creek on Legendary with only your Dwarf. Gaze at the gibs, stare at the splatter and watch the hills run red with the blood of the unclean.

Another slight tweak for the terrain, in Myth TFL dwarf satchel charges left craters letting you make an impression in places such as Otter Ferry. In In Myth 2 places such as Willow Creek and Gonan's Bridge were spared that fate. Well not any more, because now you can watch blood and gibs collect and well up when you detonate a big pile of charges under a group of thrall. Then on a wet map you can throw piles of molotov cocktails into the crater and watch them get extinguished before setting them off with a flaming archers arrow. Right under some Ghols.

So, you've completed Myth 2, you've won as the forces of light, confronted Soulblighter and killed him in the cloudspine. What next? Well, you could play as the opposite side y'know, Soulblighter's forces. It takes the game from it's tactics that you know and love and forces you to learn some new ones. Sure, these plugins have had to be rebalanced else the game would not have been as playable and you'd have been up against a much tougher opposition. In this game Thrall replace warriors, Soulless replace archers and Soulblighter replaces Alric. In the same way the enemies change and Willow Creek is beset by Warriors who got a little bit too drunk and the Mayor's daughter rebuffed them. 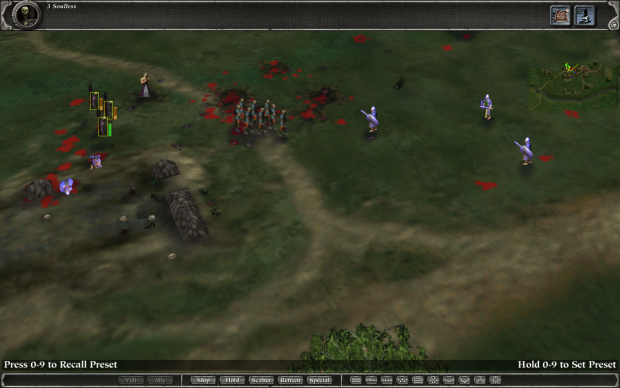 Lets not make bones about this Reversal is harder. You do have some insanely powerful units, but unlike in normal Myth your forces are weaker and don't have the benefit of weight numbers which made the opposition in the original so tough. Even with the rebalancing, you'll have to work out a new and more devious set of tactics to win. Just remember that your Soulless fly, or hover, and you'll work out some nice new tricks to keep you units alive.

Now for the diferences in the plugins. in Reversal there are some new units some of which are in keeping and some which don't quite fit (Fetch Mortars come to mind). The balance of the mod is also somewhat...dodgy. It can play very well but there are some things that make yourself say 'eh?' Reversal Reborn is more toward the Total Conversion with additional units, altered objectives, new intros. It's an expansion on the older Reversal mod. Both are included so you can try with the original objectives and the newer ones, as well as the different units.

Note: Drippy Blood and Real Craters will work with pretty much anything. I've never seen them fail to work with any mod or map or other plugin ever. Seriously. They should be left loaded for all your games and for best results play games with lots of Dwarfs and explosives. If you do find you have issues, unload them in the usual manner or do it one at a time, though I doubt that this will ever happen.