*Not abandoned, but on hiatus as of 4/11/22* MGU (acronym is a secret for now) is planned to be a third-person, cover-based, online multiplayer shooter featuring magical girls engaged in bloody combat. Players will be able to customize their characters before having them employ both traditional weapons as well as magic abilities to dismember, disintegrate, or otherwise annihilate their opponents. MGU will include PvP and PvE modes, with PvP supporting up to 8 players (4v4) and PvE supporting up to 4 (cooperative) at one time. There is also a customization mode planned... which I will abstain from talking about until it has begun development.

Yes, yes, it's been what... 6 months? Too much wacky stuff going on in my life lately, and it's gonna continue being hectic for the next few months. Even still, as I said in one of my early articles, I'm never going to stop working on this until it's finished! And thus, the work must continue. Let's see what I've managed to get done in my free time...

As always, the video update showing everything in motion can be viewed below:

"Focus" is a general Ether Ability that all players have at the start of every match. Rewatching the video, what I said about Ether Abilities using mana is a bit misleading, because not all of them do. Focus is an example of one that does not, because having to micromanage something like that would be really annoying imo...

"Just let me see the pretty colors whenever I want, you maniac!" (That's what I'd be saying as a player if the dev made me consume mana to use Focus).

It's essentially just a post process effect that gets blended in using a Timeline. The real magic is in the materials and the fact that I'm actually using two separate effects and multiplying them together (one for the world outlines, another for seeing players through walls). Custom depth stencil values are used to distinguish between friendly and enemy players.

You can see the effect in real-time below:

Now, personally I would use it just because it looks neat. But as luck would have it, it turns out there are some gameplay reasons it exists beyond aesthetics.

The primary use for it (and by primary, I mean the one I assume most players will use it for most of the time) is to allow you to find your teammates around the map and see what their status is. 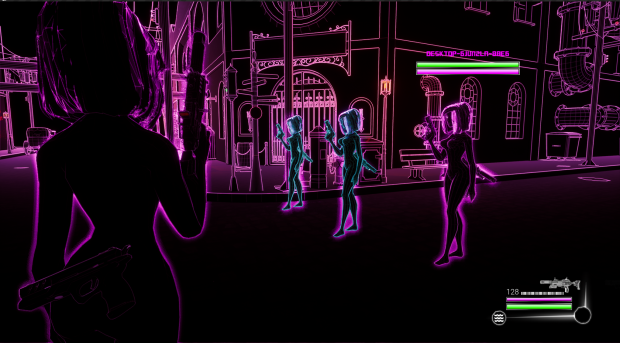 It functions similarly to the Gears of War "Tac-Com" that has broken so many Left Bumper controller buttons over the years. Basically, you can see friendly name tags and status bars from anywhere on the map, and because they're in screen space, they don't get occluded by anything in the world. I'm still debating whether or not to add markers on the edges of the screen to indicate where teammates who are off-screen are.

Focus also allows the player to "wall hack" opponents who are hiding behind cover and are not aiming. This is intended to play well with the Cover Blast ability to flush out campers and force them to take action (either preemptively to avoid being spotted, or after they notice that their safe space is about to get blown up...). 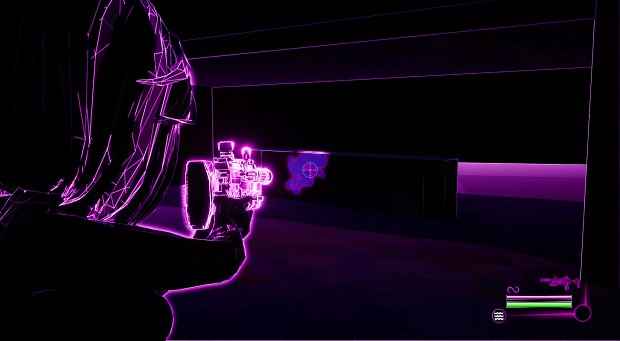 The outlines become harder and harder to see from greater distances, however, so it's really only effective up to a certain range. This will be something players can allocate experience points towards to upgrade later on.

The magic system now has a basic code infrastructure in place that I can extend. Essentially, each ability is an actor that gets spawned into the world and has some custom logic that runs and creates the effect. I've tried to make it as extendible as possible using a healthy dose of inheritance, though there is a decent amount of work that will still need to be done to get each ability implemented.

I was able to complete all the basic logic and effects for one, though, which is called "Healing Touch". It's nothing too fancy from a gameplay standpoint; basically, it heals you using a 1-to-1 ratio of mana to HP.

Players will be able to customize this to choose how much mana they want to allot to the ability per-use, from a minimum of 10% up to a maximum of 90%.

All the Ether Abilities will also have "charged" versions, which you activate by holding down the "Use Ability" button for a certain amount of time. In the case of Healing Touch, once you charge it up, your weapons dissolve and a big old magic circle appears under your feet. This circle shows the AoE effect radius, and any friendly teammates inside the circle will receive healing in addition to the player that used it.

The downsides are A) It costs more mana, B) It heals everyone for 0.75 the mana used, and C) You're vulnerable while running around using it (in case it wasn't clear, yes, you can run around and take cover and do all that jazz while it's charged). However, it does more healing overall than the uncharged version if you heal even ONE of your teammates, so it's definitely going to be worth using if you're a team player.

And of course, we also have to take the Payout System into account...

Just FYI, "Payout System" is an internal name for this, it's not gonna have an official name in the game. The way it works is that players receive score, health, and mana (aka they get "paid out") when an opponent they've damaged gets killed. The exact ratios (somewhat tentative) are:

In other words, if you did 60 damage to an opponent before they got killed (either by you or someone else), you would get 60 score, 60 HP, and 30 mana. The reason this is important is because there's no health/mana regen. The idea is to encourage players to be aggressive because they're incentivized to get health and mana so they can keep fighting.

This is also why I was saying in the Healing Touch section that you have to take this system into account... Mana gives you a huge edge in combat if you decide to spend it by switching to Magic Firing Mode on your weapons, so using it on healing should be a conscious decision.

I'm hoping that anyone who's been following updates on this game can see that I'm trying to design the magic system to help players develop their own styles of play. This will become even more obvious as I implement and reveal the other abilities I have planed, but in general, players will have a LOT of options for how to spend their mana on any given life to maximize their effectiveness on the battlefield. All of them are perfectly valid options, but it's finding the BEST option in any given situation that I'm hoping will create a very high skill ceiling for this game while still making it fun and enjoyable for new players.

Ah yes, I almost forgot to mention this... so I kept saying in my previous articles that at "some point" I would start commissioning art assets. Well, it has officially begun.

I commissioned a base female character model and outfit, fully rigged and everything, about a month ago. As of yesterday, the concept sculpt stage was finished, and I was sent some progress screenshots by the artist. I would be remiss not to share a couple of the full-body shots, so here you go... 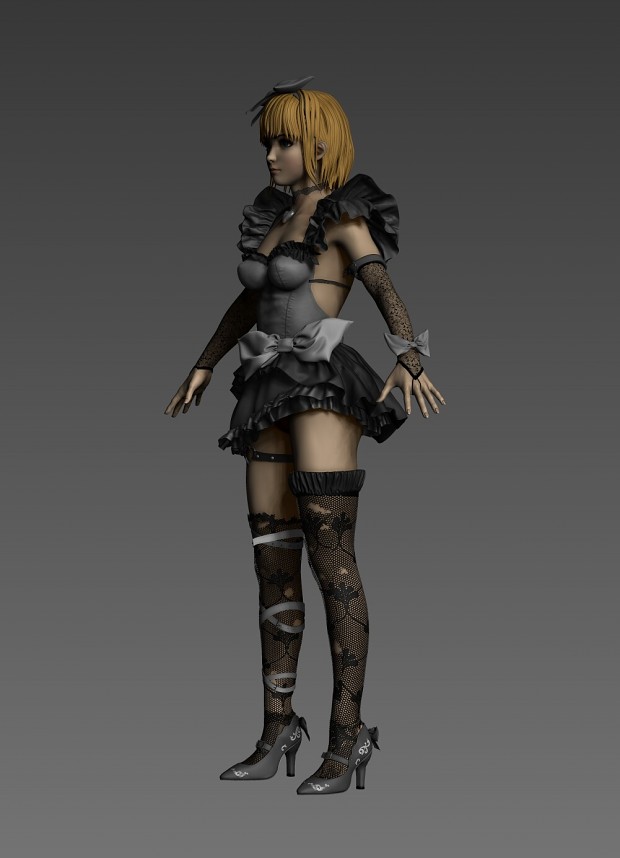 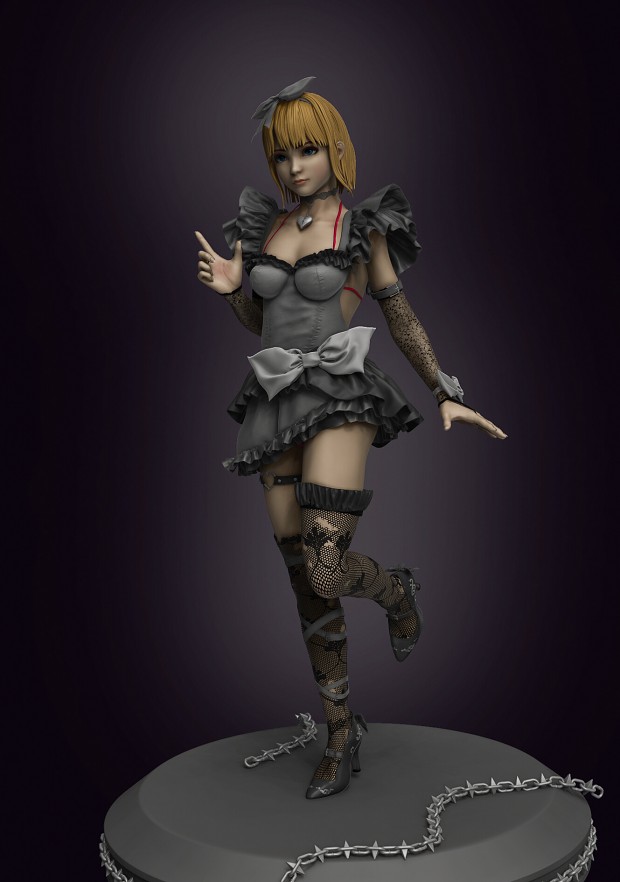 The next stage will be texturing, and then finally rigging if I'm not mistaken. I'll keep you all up to date as that progresses! Even Stage 1 Protagonist-chan is cute, though ^_^

-> Added crosshair hit markers (white for body shots, yellow for critical shots, red for kills).
-> Redesigned scoreboard to be significantly simpler, more compact, and easy to read.
-> Implemented a series of checks to address edge cases when moving in and out of cover that is already occupied by other players. Will require a LOT of testing, but so far it's smooth and bug-free.
-> Changed the "vault cover" logic to use references to other boxes to set the vault location, rather than using a numerical distance value. More setup for me, but much cleaner and less prone to bugs.
-> Fixed some issues with replication that occurred during join-in-progress.

Thank you for stopping by and checking out my game. No promises on when the next update will be, but rest assured I am working on it and trying to make it as cool and fun as possible :)

Until next time,
Flash <3

An overview of the work I've completed this past week on my first pass at weapon/movement audio, new visual effects, and cleaner handling of ragdolls.

In this article, I show some of the new environments I'm putting together to better facilitate testing various game systems, as well as the beginnings...

Update on how the networking work is going, my REST API application, and some code refactoring I finished yesterday.

In this article, I run through my initial HUD prototype and the basic structure for how I'll be implementing the Magic System in the game.

Right on. Might be a while until I'm ready to put out testing demos, but welcome nonetheless!

Still following.... Great work don't give this up lol. could become something big

Indie
Tags
Embed Buttons
Link to MGU *On Hiatus* by selecting a button and using the embed code provided more...