An update covering the work done last year on a new level set for Metal Drift.

Posted by BlackJacketGames on Mar 11th, 2011

Last year, while giddy over the idea of a Metal Drift re-release, I chose to dump a wildly unfocused block of my life into building a new level set. But quickly the months slipped by without any glimmer of a finish line. I decided that trading the last dregs of my youth for a new place to blow shit up was not a transaction I was willing to make. So I shelved it. But recently, with the renewed energy of an actual re-release, I decided to move it off the shelf, and onto the back burner. So it will now go from being a cold, congealed hunk of putrid sludge to a slowly simmering pot of delicious goodness.

I’m posting some shots of it’s current state, so you can inhale some of the aromatic ingredients before they are whipped into an iron chef style, decadent masterpiece.

Because I know you’re curious; our upcoming iPad/PC/Mac game ‘Slime City’ will be occupying the white hot front burner. Look for terrifying glimpses into that mysterious new offering very soon! 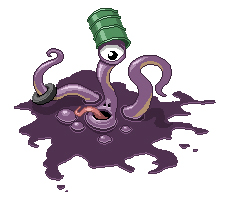 Currently Metal Drift boasts a glorious set of 5 (FIVE!) action-packed levels (or ‘Drift Decks’ for the cool kids). These ‘Metro Drift Decks’ are all set at night in an open air stadium that exists within a massive metropolis. So yes, the ‘Metro’ tag refers to the deck’s city setting, not to how stylish and well groomed they are.

This incredible city surrounding the ‘Metro Decks’ is controlled by the powerful, and benevolent ‘Athalon’ corporation/team. Now don’t feel stupid if you’ve played the game all year and didn’t know this, because there is absolutely no in-game indication of a city and zero mention of the deep, politically significant back story that I just revealed.

The new Deck(s) will exist in a desolate area of this future Earth lovingly referred to as ‘The Waste’. As you might guess, this area is controlled by the sinister ‘Triax’ corporation/team. (These are the guys in red you will learn, or have learned, to hate with every fiber of your being.)

The ‘Waste Decks’ will be set in daytime, surrounded by southwestern, red-rock, vistas. See below some of the initial geometry tests. These are relatively finished, I just need to slap some paint on them, and throw down the wall-to-wall carpeting. 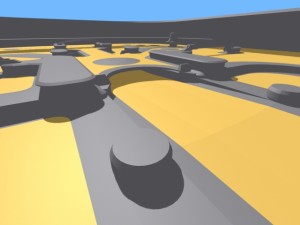 Game-play wise, I’m excited to play around with shorter, more frequent boost areas, more overhangs, and especially jumps! Below you can see some of the tech detailing. Brian and I have both wanted to add a lot more vertical detail. I plan on also adding flags and wind turbines. 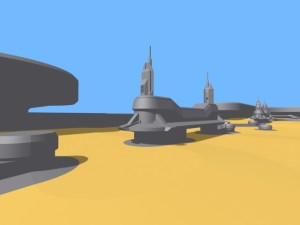 These shots are the first pass at a deck called ‘Javelin’. Which has a long boost tunnel up the middle, and a series of obstacles up the sides. So once the ball is picked up, it’s slow going to reach a goal, but if there’s a turn over on one side or the other, the ball carrier can shoot down the middle towards the enemy camp. It should create a frenzy of accelerated boost fights right before each goal. 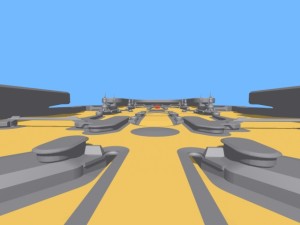 As I said, this project is on the back burner so progress will be slow. As I do find time to work on it, I’ll make an effort to post changes.

As always, check out the current release of Metal Drift at Desura (below).

so, you're developing some back story, can we expect singleplayer ala UT3/UT2004? ie story segments setting a backdrop for a match.

really, whats keeping me from getting into this is a lack of singleplayer (and racing!!!)

I must say, I am quite excited to hear about new arenas! Not that the old ones are bad, mind you, but the more variety the better, in my ever-so-humble opinion.

@Tallon_hunterR - I'd like to add some back story. It's on the list, not sure when it will happen though.

I'm so stoked for Javelin, you just have no idea.