MASTEMA Out of hell

You don't know who you are, you loose any memory of the past, you're sorrounded by evil and you don't know where you are. You don't know even why you're facing this orrible destiny, only one thing you're sure you know, you've got to find a way out of here.

Post news RSS Out of hell my new game

Out of hell is a one man indie videogame. There is a good retrogame taste and a wonderful oldschool feeling. It's a platformer where you can walk, jump, fight and solve some puzzles. I'm doing everithing alone, graphics, music, sound effects and programming.

Who is Oscar Celestini?
I'm an italian illustrator, comic artist and colorist, i've worked for a lot of editor from all over the world, some of them: DC, Image, Disney, Le Lombard, Moonstone, Soleil, Sergio Bonelli, ecc...
But i've always loved old videogames, my favourite console is Genesis (Megadrive) and i've got a great passion for pixel art, that's why i'm trying to do this game.

What is Out of hell?
Out of hell is a indie platformer videogame developed for PC.
It's done all by me, graphics, animations, musics and programming.

Graphic style
All is created in 2d, old looking sprites and dark backgrounds. It's a horror videogame where you are a lost soul looking for a way out of hell.

Release date
There is no a release date but i can tell that i'll complete it on may 2013 (i hope). In this months i'll try to get attention on the project and find some supporters that will like to buy the game when will be completed.

Some screenshots of Out of hell: 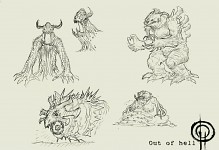 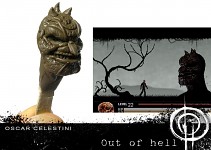 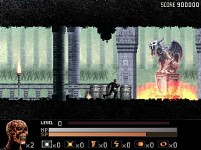 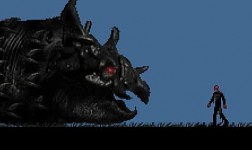 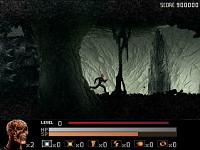 I'd love to buy it, and I bet my brother too! do you already know what system will you use (steam, desura)?

I don't know, at the beginning i'll put it in a dedicated website-blog and aniwone will be able to buy it. In a second time if it will be appreciated maybe steam or other videogames market. Thank you Midnightmare (and thanks to your brother to! :)