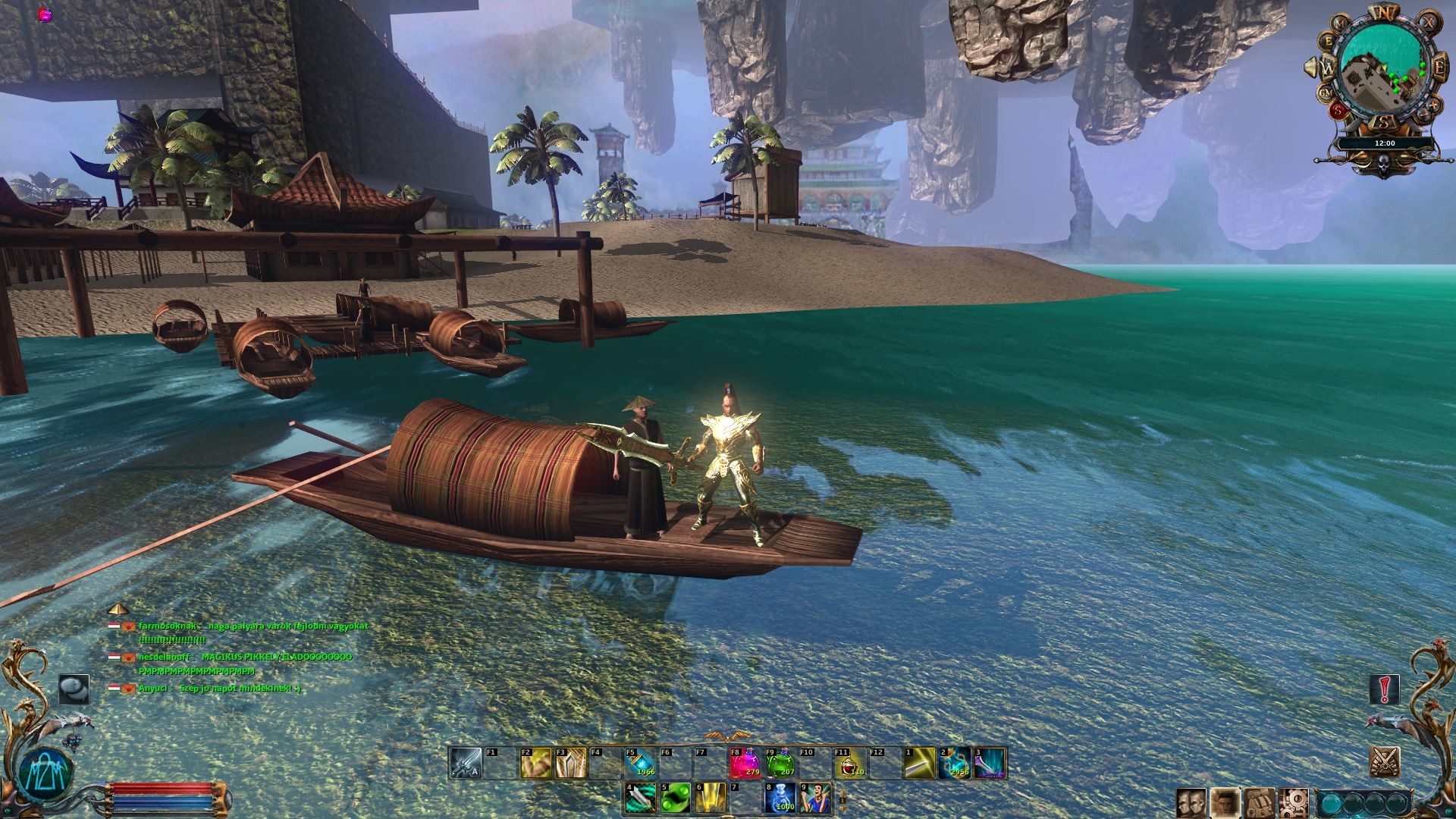 Let’s take a look at something new, shall we? Well, “new” here meaning “a returning MMORPG from 2009” and not so much in terms of gameplay mechanics. All the way from Budapest comes Magic to Master, a revived free-to-play MMORPG that appears to be in an alpha state at the moment but is working on entering beta as fast as possible.

Formerly published by Laniatus Game Ltd., Magic to Master aka M2M has traded hands to business owners T.A) and M.A, who aim to bring the MMORPG back in 2020. The game takes place in a remote world where “the forest hides secrets” and “the deads are not deads” according to the sizzle reel (OK, go easy on the translations). The game’s website offers a look at some recent updates made to the game, such as improved animations and optimizations to HeroClient – yes, you recognize HeroClient and HeroEngine from The Repopulation dust-up. The game is apparently partly supported by the IdeaFabrik conglom, as the patch notes indicate “close contact with HeroEngine & IdeaFabrik.”

The game is arriving to beta at some point soon, but it’s free-to-play now if you’re even passingly curious about this one. If you’re the sort of person who would like to support what the devs are doing to bring M2M back, you can throw a little money to its Patreon, which is offered at three different levels and unlocks various rewards and game access levels.

Here are a few teaser about the game; 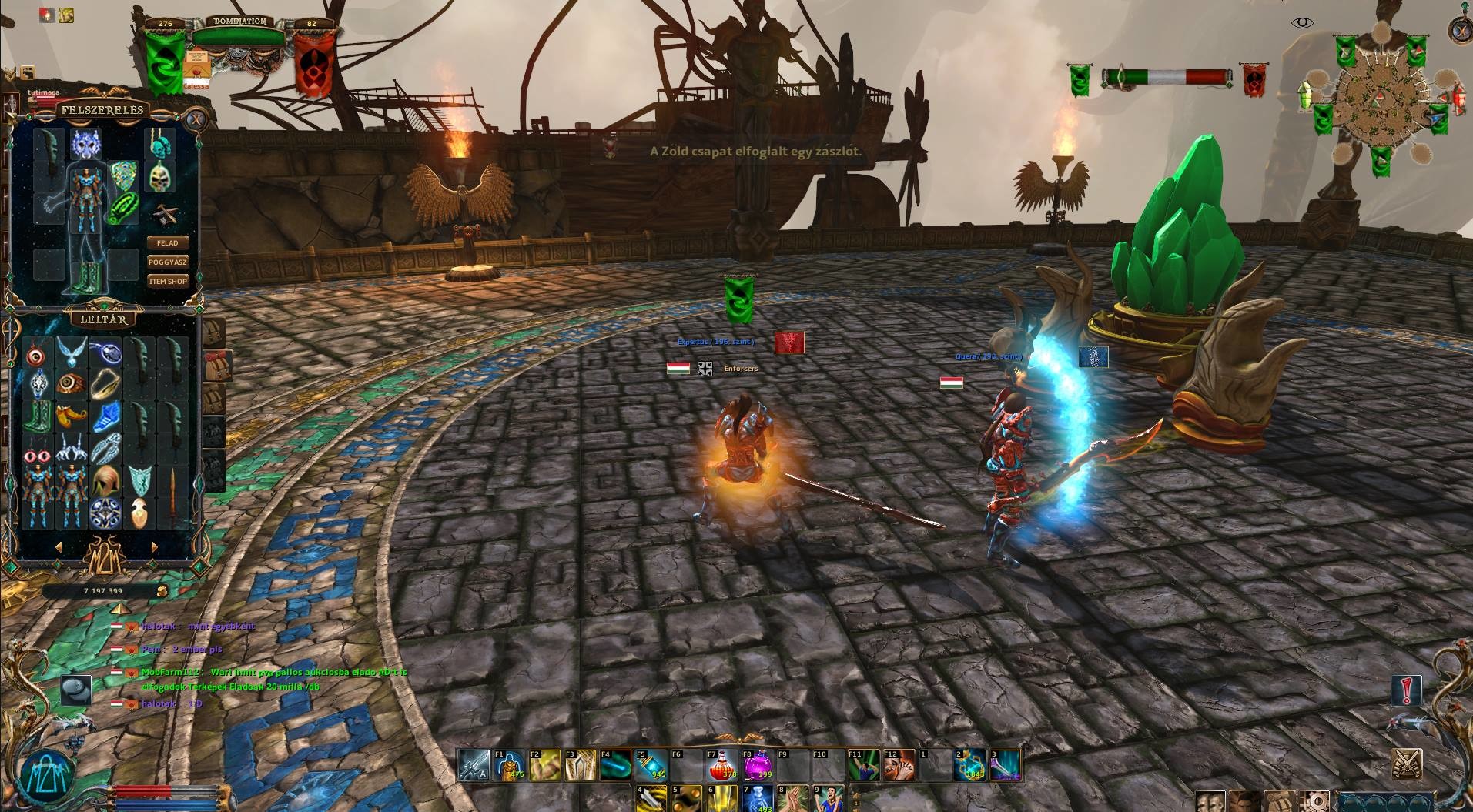 This is an amazing feeling! but we want to remind everyone that this is the first Alpha Content. He was in preparation for this moment last year. You'll see a lot of new content, but more importantly, you'll know better now that MagictoMaster is the main goal we're planning to address to keep track of the original scope and spirit.

Bug fixes:
• If you start a new boss fight or run immediately, you may be disconnected. Constant!
• The order is fixed according to the product names in the Market Place.
• More refined animations during the wedding.
• A PM window may open unexpectedly and disable the focus from the current window.
• From now on, you cannot talk to the same character in more chat windows.
• You can put the newest stones in the market place and the stones will appear in the “Miscellaneous ategor category.
• The attack value of the Flames skill will appear immediately in the skill knowledge.
• We have corrected a task that appears incorrect on level 29.
• Time values ​​of skills will not appear round.
• From now on, you cannot select stored ninjas.
• Errors in name change (market place, group, clan, etc.) Fixed.
• After the Minos run, you sometimes teleport back to the Capital. Constant! You will now be teleported to the NPC at the entrance.
• Divine Weapons does not show +0 in the item name.
• After pressing the Enter key, you did not start typing wisely in the right window. Constant!
• Ganda's name does not contain +0.
• All products in the Marketplace will appear immediately. So far, only one of the same items has appeared.
• The News tab can be reused in the clan window.
• The online status will be displayed correctly in the clan members list.
• Under the PM envelope, the name of the given character does not appear only in lower case.
• The marks (?,!) Above the head of the NPCs will always appear.
• a character leaving the group can be teleported to the run with the group left behind. Constant!
• We fixed an error that caused the characters to shift the duing dance.
• If a group member is offline, you cannot complete tasks. Constant!
• You may not see the bottom of the text in a window with a scroll bar. Constant!

The game is available again. The update pack contains the following features and fixes:

Modfications to enhance the game experience:
• Cheaper Bravery Cape in the Item Shop! From now on it costs 5 GD instead of 20 GD!
• The maximum value of the 'defense bonuses' is 20% (instead of 10%). This modification affects:
o Magical Defense
o Physical Defense
o Staff Defense
o Dagger Defense
o Arrow Defense
o Sword Defense
o Twohand Defense
o Fan Defense
• The level difference in a group is 50 (instead of 30).
• The skills in which players use invisible mode (by Hiding skill) are not able to cause critical hits from this moment.
• The Shining Armor skill grants 40% defense on LVL 40, and based on it, the values ​​on the skill's lower level are modified.
• Every class gets one status point after every level up:
o Warrior: +1 Vitality
o Ninja: +1 Dexterity
o Petrun: +1 Intelligence
o Shaman: +1 Intelligence
• 1 Dexterity point grants 10 defense points from now on. The dexterity does not affect the evasion that much.
• The maximum value of the evasion is decreased:
o 45% at Ninjas
o 35% at Petruns, Warriors and Shamans
• The maximum value of the 'power against a given class' bonuses in the 6th and 7th bonus is 7,5%.
• The players cannot cause critical and penetrating hits at the same time.
• The Blessed Armor skill grants double amount of defense.
• The cooldown time of the Healing skill is increased to 20 seconds.
• The Wu Zhein, Minotaur, Naga and Limited sets, the Monster Master and the Monster GrandMaster weapons are tradable after the right kind of Soulbound Remover Scroll usage!
• You can remove the soulbound from the mounts.
• Increased health points on every battle mode (Last Man Standing: 5 times the amount of basic health, 3 times amount) 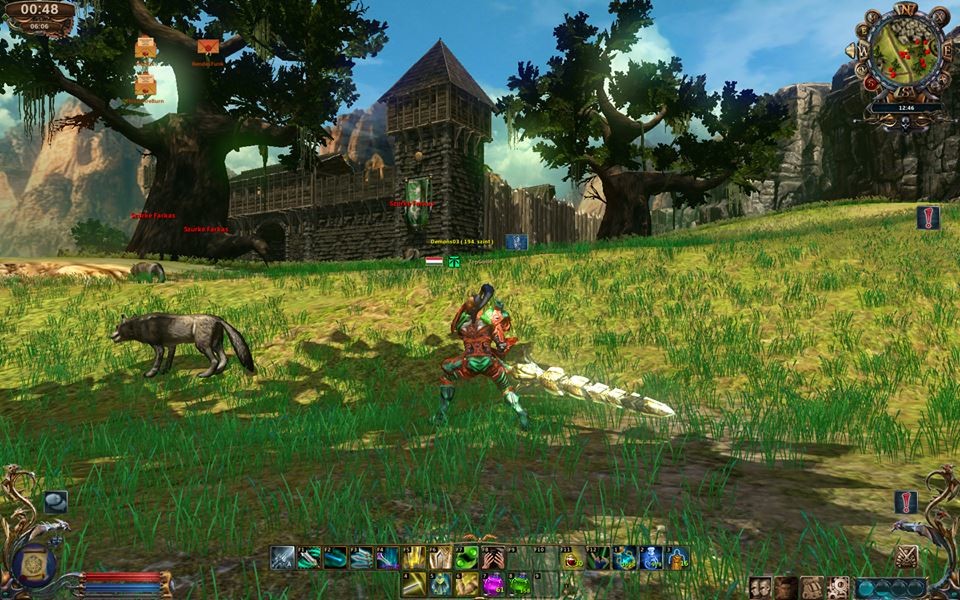 Fixes:
• After the teleportation to the WitchQueen map, the beginning position was wrong sometimes. Fixed!
• We have fixed the buff which grants invulnerability at the beginning of the Battleground.

The update pack contains the following features and modifications:

• GOLD DROP HAS BEEN INCREASED! Optimized Gold drop in the game! We have increased the Gold rate on many maps that the game will be more balanced.

• VALUES OF THE LIMITED EQUIPMENTS HAVE BEEN CHANGED! Optimized attack power in the limited weapons over level 200. There was a wrong formula which grants too high values. This modification affects the Limited weapons on lvl +7, +8 and +9 only. Moreover, we have increased the value of the damage in the limited accessories, the maximum value of the damage in the limited items is 38% from this time! Of course in spite of the modifications, these weapons have the best values ​​in the game!

• BONUS ADDERS / CHANGERS FOR GOLD! From now on, the Bonus Merchant and Gold are available at the General Merchant for Gold! Gold Denarius. These items are not cheap, but Gold Denarius.

• LIMITED EQUIPMENTS FOR GOLD! From now on, the Gold for game too! Search for the NPCs in the Imperial Palace! These items are expensive because they are the most powerful equipments in the world of the M2M. Our goal is that these sets will be available for everybody and the Gold will have value. If you collect enough Gold, you will be able to buy the most epic sets!

• NO LEVELLIMIT ON THE NAGA MAPS! In the Naga Palace and the Naga Run, there is not a level limit at the moment! This modification affects all the Naga monsters and bosses, eg the Naga Queen will drop chest for everybody! Although the characters with the highest levels will not get EXP there (except the 2% on the Naga Run), but they will be able to collect items and Gold for equipments and Bonus Adders / Changers.

• MORE TRADABLE ITEMS! From now on, the Master and Grand Master Weapons are tradable in normal trade window too (after soulbound removing).

• GOLD FOR THE STONES AND UPGRADE ITEMS! NPCs. 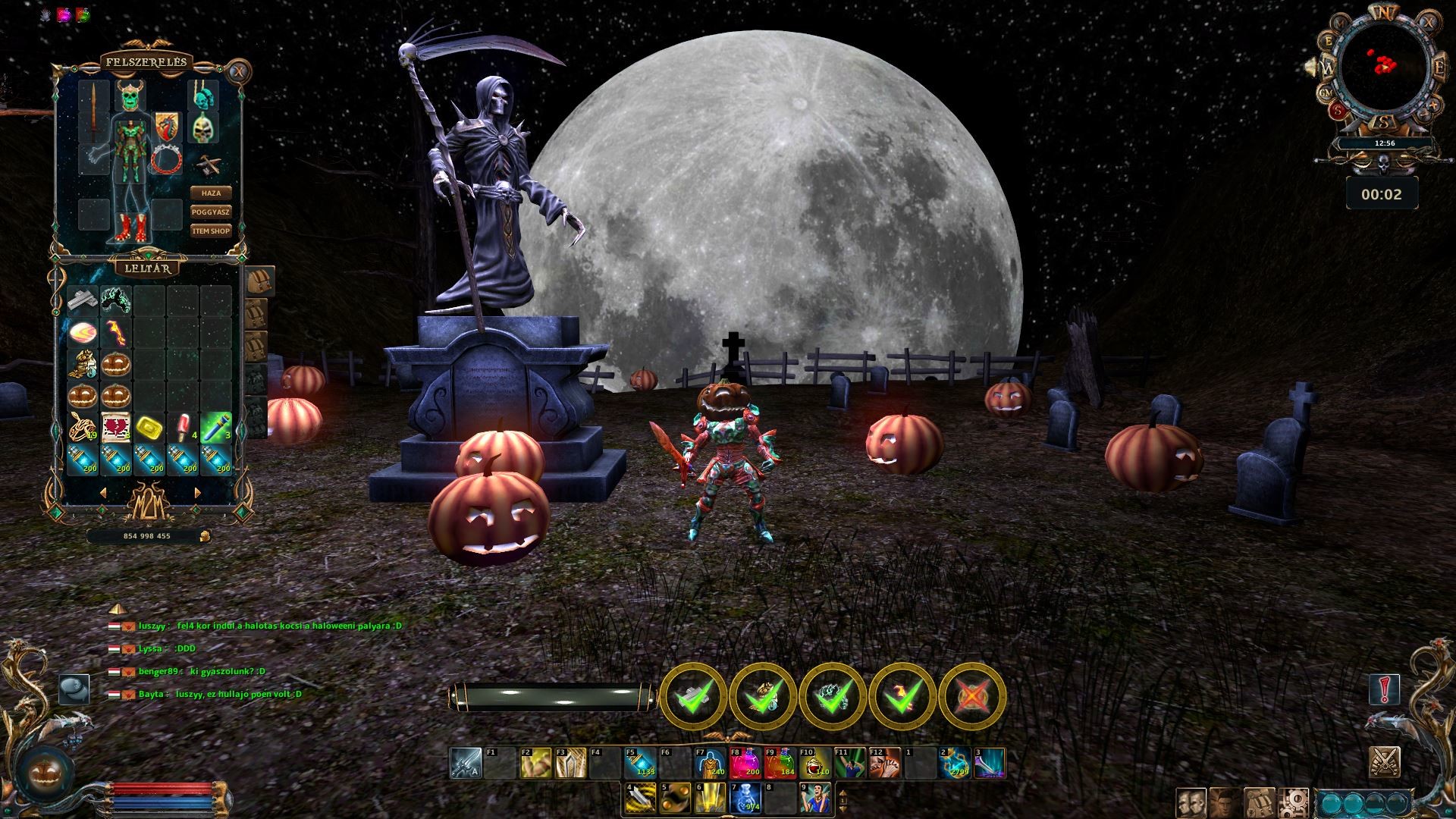 Modfications to enhance the game experience:

I saw this message so late, I'm sorry about that, I'm really sorry.
I guess it was a delay related to the web page not being followed much.

Our project is still ongoing and almost finished, if you are interested and still want to follow, follow these links; It will bring you directly to us.

Twitter
Tags
Embed Buttons
Link to Magic To Master by selecting a button and using the embed code provided more...

The Life and Suffering of Sir Brante Role Playing