Mafia is a 3D action game, played in the third person. The player assumes the role of a gangster in an American city of the 1930s, and gets a chance to live through gangster's rise and fall. In a spell-binding story of human hunger for power, he will experience everything that was taking place in the underworld during this stormy period: high-speed car chases, bootlegging, assassinations, and bank robberies. We set the story in a huge, fully-functional city, created 60 vehicles to choose from and more than 20 missions filled with non-stop action. The gameplay does not end there with over 40 little and large mods available, this game is great!

Here's the new 1.1 version of the data extractor compatible with the 1.1 Mafia. 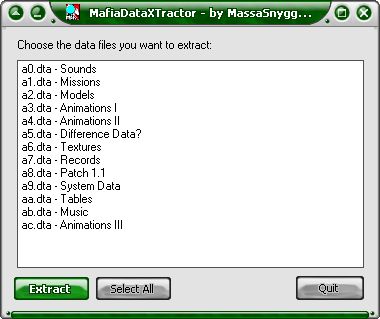