With a set built entirely out of paper and cardboard, and sumptuously filmed, Lume is an adventure game with a style unlike any other. Power to your grandad’s house has failed. What’s more, he’s nowhere to be seen. Immerse yourself in Lume’s photoreal world, solve perplexing paper puzzles to help restore the power, and uncover a deeper mystery behind the blackout. This game forms Part 1 of a larger, ongoing story. ***Nominated for Excellence in Visual Art – IGF Awards 2012***

The Indie Royale game bundle site returns with the Valentine's Bundle, offering five stellar titles gamers can enjoy now, or gift to their Valentine to arrive on Valentine's Day. 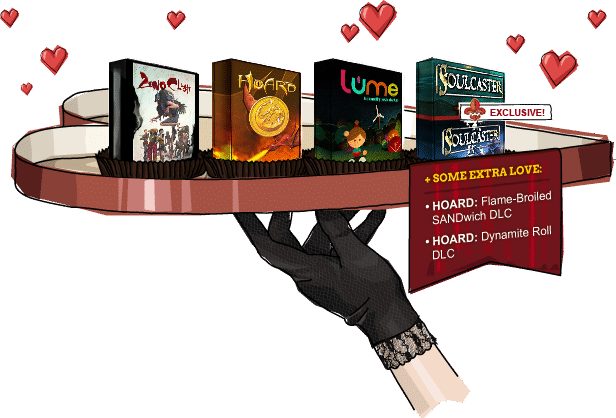 Another visually stunning, IGF-nominated game in the Valentine's Bundle is State of Play Games' beautiful puzzle adventure Lume (on Steam for PC and Mac, Desura for PC and Linux, DRM-free PC, Mac and Linux download). Lume was filmed on a real-life set built entirely out of paper and cardboard. In this first episode, players navigate their way through puzzles to restore the power to grandfather's house and uncover a deeper mystery behind the town's blackout.

Moving on, a Valentine's bundle wouldn't be as hot without some fire. Therefore, Big Sandwich Games offers its scorching single and multiplayer arcade-strategy game Hoard (on Steam for PC and Mac). Players control a fire-breathing, high-flying dragon whose job is to hoard as much gold as possible, while destroying merchant wagons, buildings, and anything else that attempts to steal its stash. Making this Bundle even sweeter, two extended-play Hoard DLC packs (individual Steam codes for both PC and Mac) are unlocked at bundle start. Dynamite Roll! and Flame-Broiled SANDwich! offer players lots of new maps, enemies, powerups, achievements, and even an entirely new desert continent to scorch and scour.

As before, the Indie Royale bundle series runs on a five-day model where the price will automatically increase as more people buy the bundle. Generous purchasers, however, who choose to pay more than the current minimum will earn One Life Left's eclectic 'Music To Play Games By Too' compilation, available for the first time ever digitally.

Indie Royale was co-created by Gamasutra sister site IndieGames.com and independent game download service Desura. More information on the Valentine's Bundle, including real-time statistics and its current price, is available at its official website or via its Facebook and Twitter pages - and remember check back during or after the bundle for more special bonuses for all buyers.

Solve puzzles to help restore the power, and uncover a mystery.

t doesn't launch on my Ubuntu 64bits :-/
When I launch the game in a terminal, I have this message:

and I didn't want to install a lot of 32 library to make this game run, it's complicated and could make my system unstable.

I installed the windows executable, it works good with wine! and it is not complicated.

Tips for 64bit users: Install libcurl4, 32-bit version of the library, the problem with segmentation fault was gone for me...

So I can let my hope faint to play this game ( that i bought )?

Oh well. At Least try to make sure to get Lume out the list for 64bit linux games on desura.

Nice adventure/puzzle game! The graphic style is lovely, but it is too short and 5 € are too much.

Is it working on 64-bit linux yet?

Nice game. Got it with valentines bundle. Style is really cool and unusual. Waiting for the next chapter, guys!

We made Lume and want to make sure you guys can play it on your 64 bit systems, so we're looking into it right now for you. It seems like you might be able to get it running with 32 bit compatibility libraries installed as jharman suggests, but ideally we want it to be as hassle free as possible, Will post here when we've discovered a bit more.

Thanks for caring about us. And thanks for releasing a Linux version.

ah darn, sorry for the downvote, such small buttons, such large fingers, damn those touchscreens.

There's more linux beyond Ubuntu, in fact I'm typing this from Fuduntu 2012.1 x86_64 and Lume doesn't work either. On my netbook which uses Fuduntu 2012.1 i686 it works great, but on 64bits it's a no go. Using the 32 bit compatibility libs results in nothing other than a segmentation fault error.