LINK-DEAD is the follow up to the succesful 2d multiplayer shooter Soldat made by Michal Marcinkowski. This game has been created thousands of years ago by Odin, the god of war himself. While hanging on the World Tree for days upside down, tortured, without bread or water, he had a flash of insight. A game that will conquer ALL. Mighty viking warriors used it to train their battle skills before riding into deaths hands. To achieve victory, slay the enemies, conquer their homeland and make slaves of their women. This game brought the viking men pride and fame and thanks to it they reached eternal glory and now live in Valhalla sitting besides Odin's throne. Today, Michal Marcinkowski is bringing that game back for you mortals to play it! Odin has blessed him with Divine Inspiration and serves as a guide in the process of creating the best and most awesome game ever made! This game will rock, it will make a MAN out of you, it will kick your ass!!

It can be best described as a team-based realistic side-view combat. General mechanics are that of a 2d side-scrolling shooter (eg. Soldat) with mouse-driven combat.

Not so distant future. A war has begun, between men and machines, both in cyber-space and in the real world. The player takes part in this struggle as commanding officer of a team of soldiers and hackers.

Two teams fight each other. Both are located in underground bases. The surface world is the urban world we know today but ravished by many years of war. Each map consists of the underground and the outerworld. The outerworld is where mainly robots fight, it is a dangerous place to be in. Soldier can control robots, droids, terminators, gun turrets, drones, sentry guns etc. They will be controllable via computer terminals located in the underground bases. Terminals and enemy networks can be hacked into - to open, vaults, doors, move elevators, disable sentry guns and gain command over the enemy robots!

This release took over 40 days and nights because practically every aspect of the game has been changed or tweaked. This is a brand new game you have here. If there was something you didn't like about previous versions check this one out.
First of all the whole movement system has been changed. I have closely watched parkour and tried to get that feeling of free urban running into Link-Dead. I'm sure this game beats Mirror's Edge 2D in this aspect alone. There are lots of new animations and moves. But what is most important is that they are really easy to do. You just need to know how to jump [SPACE] and point your mouse at the direction you want to go.

This is explained in this video tutorial "Moving over or under obstacles".
The second cool thing is melee weapons. There are new animations for handling them, like striking, blocking and THROWING! You can play with two new weapons: the Spear of Destiny and a mining Pickaxe. Impaling a dude against a wall with the spear was the thing I was so excited about a couple weeks ago. There is no game of this kind that allows you to do this.
Watch this video to see how the Spear works (you might need to watch in fullscreen to see the full effect):

lots of cool little things you can do that me and other players love. You can customize your avatar. Not only can you change the color of your clothes, skin and hair but you can also change the hair style, attach a cool waist chain, cape and different styles of helmets!

Next thing that personalizes your gameplay are HUMILIATIONS.
You can now piss on your enemy.

Imagine him dying in agony on the floor, screaming for help. You step in front of him and take a leak on his head. You have to play the game to see this.
The other humiliation is HEAD COLLECTING. No further explanations, see this on the video below:


Other things worth mentioning are: 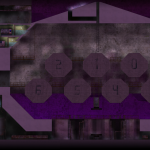 PS. If you still haven't got access to play the Link-Dead Alpha version you can buy it right now on Desura. This will give you access to all alpha versions of Link-Dead + give you the opportunity to part of the development of this game.
Last but not least, here is the complete changelog. Especially read the [movement] section as it explains all the changes in controls.

[maps]
- added new map Nuclear Plant
- added destructible glass wall effect
- more lighting and shading on Warehouse map
[gameplay]
- added droppable physics weapons and grenades
- added gun falls out of hands on death
- gun in hand is collidable with bullets & explosions
- gun can be shot out of hands if soldier is tired (high fatigue)
- if out of ammo gun becomes melee weapon
- added pickup time for every pickable item
- picking/disarming laser/sticky grenade takes up to 3 seconds
- picking items from soldier takes longer (over a second; more if soldier is alive)
- added Humiliations: acid piss for Wasteminers & head trophy for Einheriar (use action menu [E])
- soldier attachments and hanging parts (cape, hair) are loadable from inventory
- armor falls off when damaged entirely
- stuff can be picked up while jumping or climbing (not just standing)
- added resting gun against obstacle to reduce recoil
- both teams have the same weight class thresholds
- remote detonator has 1 sec activation time after falling
- laser tripwire does not activate on all Wasteminers
- fatigue is calculated now from actual movement displacement
- soldier gun collides now with other soldiers
- wound effect is calculated using lowest health limb instead of average of limb healths

The next Link-Dead release will have a feature called "gun resting" which will help you manage recoil of the weapon. Take a look how it will look like.

Armor for both teams - done

Both teams now have fully customizable body armor. Check out the cool new pixel graphics for them.

Update from my devlog from the past 2 weeks. I was working on new Parkour elements in the game, player color and attachment customization and new gore/melee...

I miss this game so much, by far the most realistic/brutal 2d game.
MM, come back to this master piece, please!

Why the **** did I even bother paying for this if you fuckheads aren't even going to finish ANY of your projects?

This'll be just as dead as soldat and Berserker, you guys suck.

IDK about Berserker but KAG and Soldat aren't dead -_-

Yeah the instant i found out you are only paying to get the alpha i got a refund instantly, **** this guy.

Most freemium games suck because most don't give you good stuff when you don't pay for the perks. What the hell would you make premium content in Link-Dead?!
If it was free, they would have to make money off donations.
Your argument is invalid.

lol! so we are not even buying the full game?

Man, I bought both soldat and KOG because they where good deals.

This is not a good deal, and the last Michel M game i conciter purchasing.

Let this turd sink people, we really do not need any other developers following this absurd buisiness model.

You're a nincompoop. It's 5 bucks, or rather, it's not supported anymore, multiplayer's gone, it was on donate basis only when it was important.. I guess messing around's fun, but

Yeah I bought this a long time ago still annoyed that people might still buy it without knowing its dead. I still don't think he has called this officially dead on his blog or anything else either.

Also I wouldn't call Soldat or KAG great deals (well depens how early you got KAG). I bought both of them twice though because they are excelent and the high price is partially to supplement the free versions which I think is a worth reason for the high price.

" I still don't think he has called this officially dead on his blog or anything else either."

He's made it [very] clear it's [in] stasis. Don't make silly assumptions.