1) Random time of the day which is rolled before each game. Currently there are 2 different "sets":
- Whiteout. It's bright outside, but hard to see far away because of the snow.
- Dark night. No comments needed.

2) Power generator. Sometimes power will go off and so all lights connected to it will turn off (while the emergency lights will turn on), and the only way to restore it is to press the red button near the generator.

3) Players will have 6 glowsticks at the beginning. Each lasts for 90 seconds, and you can use it at what i considered to be "keypoints". When you're at it, you will see a black glowstick ("indicator") on the ground. To light it on the ground you need to double-tap your USE button (E by default) while looking at approximate glowstick location.

And a bit more. 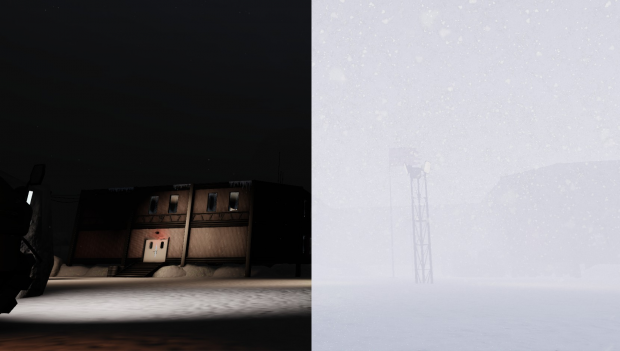 I didn't fin any bug.
Nice map. I liked much the outside place. I almost felt the cold when I saw that thick white fog.
I also liked the light switch button.
Up-voted my eight.

Yeah I must say, not finding any bugs was nice :)

You made me think about it. It should be relatively easy to do and would look pretty well at the same time. May be I will do something like that after the grindhouse contest.

Yes, I guess the white think fog could be the same horroristic as the dark.

I liked this map. Lots of space to run around which is great, the lighting is good, the element of having to turn the lights back on randomly adds some variety to the game play. Only thing I don't understand is the thing about the glowsticks. Could you maybe make a video to show how this works? Considering it goes pitch black in some areas, I'm very curious about this.

First I thought that moddb doesn't allow you to post links in description, but it was only in "summary".

Here is the old map of places where you can use glowsticks:
Imgur.com

I'll update it today, it changed a bit.

Right! Now I understand how the glow sticks work. Can I suggest you split into 2 maps, one for day and one for night? As it really works well for night mode but not a fan of the other.

I'm actually going to do it but just not sure how and where exactly to post other version(s) of it.

Awesome! Yeah I'd suggest Tripwire forum for now, alternatively GameBanana (or both). Thanks so much, we definitely want to put the night map on our server's map rotation. Thanks!

I've uploaded dark only version of the map to gamebanana:
Kf2.gamebanana.com

this map was a blast to play. that underground tunnel between the compound and the warehouse/garage is so good man

- Added some unbreakable lights here and there.
- Added notes which explain how to use glowsticks and that you can turn on the generator.
- Some bug fixes of course.

Nevermind, disregard my comment. Blizzard/fog is still in the map, just comes in later.

Only thing I'd add to the map is more obstacles in the front of the complex. Just things to obscure view from having a complete 360 view of every area zeds are coming from.