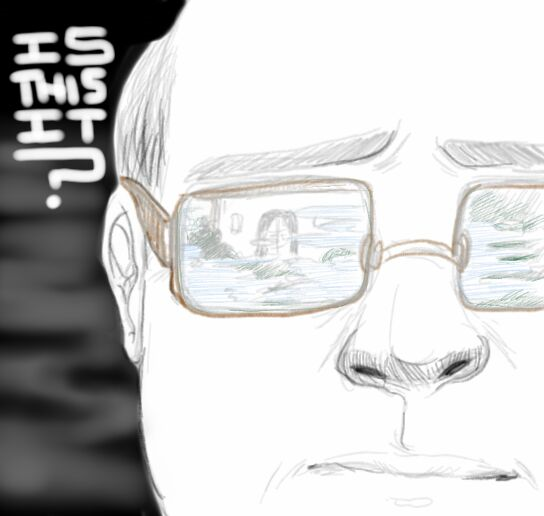 Edmund's had a hard life. It all started even before he was born. He was conceived into an unhappy family of reclusive, unintelligent, obese, balding people; and he became one of the family. His parents bickered and fought, and dragged poor young Edmund into their fits... Until the day daddy died. His mom was an alcoholic after that. Edmund didn't have many friends. The only friend he did have was an asshole; an asshole that became his boss, at a job he hated, for less pay than he deserved. As a result, Edmund could only afford to live with his hot-headed alcoholic aging mother, and her cat, which hated him.

Edmund just wanted to be happy. Online is where Edmund was most happy. There, he didn't have to be him, he could be someone else. And that someone else was popular, witty, and liked. He even got an online girlfriend. Edmund thought, maybe things were turning for him? Edmund was wrong.

'Is This It?', is an RPG Maker horror game starring a man named Edmund, who's been dealt a tough hand in life. You play as Edmund as he returns home from a day at work, ready to escape the real world and delve into his busy online persona's life... But the gears of fate are turning, and if things don't change, Edmund may have one last cruel surprise awaiting him. The claws of misfortune swipe viciously to latch onto the poor Edmund...

Guide Edmund around his home, and interact with and alter the things and people around you to change the path Edmund goes down. Survive the horrors that unfold before you, and know that your actions change things. Featuring some original music by myself, original artwork by Rincs, and a colorful cast of characters in a twisting and churning story, with branching possibilities and endings.

Remember, there are no dead ends, only possibilities.

So this is a freeware RPG Maker horror game made from scratch for Ludum Dare 29 back in April of 2014. I last month updated the game quite a bit, and released it to various freeware sites, to which the response of the game was much better than I anticipated. I decided for experimentation and fun, to try and submit the game to Greenlight and see if I can get it as a free game on Steam. If this gets through, I'll expand the content of the game greatly, and release it for anyone to get freely and play via Steam. If you have any questions, I'll respond in the comments on this page. Thank you for the kind word from people, and to see how this goes.

Basically, see if I can get the game as a free game on Steam, if it gets Greenlit I'll add a lot of next content to the game, mainly for experimentation and to see what happens.

Indie
Tags
Embed Buttons
Link to Is This It? by selecting a button and using the embed code provided more...