What would you do for freedom? In Iron Grip: Warlord, the nomadic civilization of Atelia is being swallowed by the massive Confederation. It's a hopeless and tiresome battle; for every enemy Confederate that falls, five more takes their place. Outnumbered and forced to retreat into the heart of cities, a full-out urban warfare has begun that the Atelians will surely lose. As the vestiges of your world crumble and your morale sinks, the only hope for the future is you and your fellow warlords. This is your last stand. This is your freedom. This is your game.

Do Atelians celebrate holidays? Well, not exactly, but we at Isotx are celebrating this December with some new units and fun to be had in Iron Grip: Warlord!

It's that time of year again. The stores are plastered in mistletoe and candy canes, in most places the temperature is dropping, and we're all eagerly eying video games to snatch up and play over winter breaks.

So what kind of game experience would Iron Grip: Warlord give if it didn't bring a little festive cheer of its own! No, we're not talking Santa hats and snowflakes, we're talking new units for you to blow to smithereens - the best kind of gift we can give any gamer!

These new units will be coming in the form of a patch. The December patch will be coming soon, and it will contain three new units as well as a few other tricks. This patch will be available free to anyone who has bought Warlord, but will not be reflected on the demo unfortunately. You can always get your copy at our webstore if you haven't already.

Today, as only appropriate, I'm going to let you see one of the new units. This guy may not exactly be someone you'd want to sit and open presents with, but he certainly will add some depth in the battlefield. 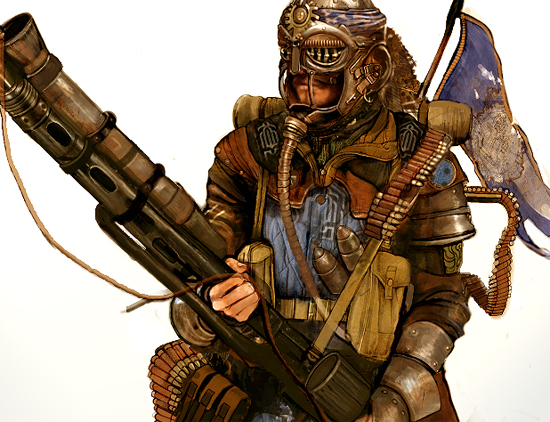 This man is a religious zealot known as a Confederate Templar. The templar is part of the Confederate religious order within the Fahrong armed forces; they are normally kept out of the conflict, acting as priests, unless the situation is bad and requires extreme measures to push through enemy defenses.

The Confederate Templar is equipped with a modified heavy machine gun turned to be able to be carried while firing, as well as a modified rocket-propelled grenade launcher mounted on top. As briefly hinted above, the Templar is dual-purpose as after combat-operations have finished they take part in religious conversion efforts.

They can take a lot of fire due to their armor, yet aren't trained as well as the Herrad legions in swarm tactics so often operate in groups amids the conscripts to boost morale and function as heavy-armor shock troops.

I tried the demo and it seems like an awesome game. Usually I'm only able to find one server with anybody on. That's fine for a demo, but I'm wondering how populated the full game is. I'm aware the game has single-player, but in my mind multiplayer is a big part of this concept. Essentially, my question is how many servers are populated with a good amount of people (4+ players) usually?

i've found if you hop on an empty server, ~75% of the time others join within a few minutes. In the demo.

Thanks for the tip; I'll have to try that.

That is really badass. :D

Oh hell yes! I was hoping for an update like this, soon. Nice work.

very talented concept artist :> always nice to see! and i have got to say.. if i was still playing games quite a bit i would absolutely buy this game.. it looks great! keep it up guys!

is this still comming to steam if it dose that it probably when i will dl it,