You are a lone adventurer in a strange, non-Euclidean world. Gather as much treasure as you can before the nasty monsters get you. Explore about 50 different lands, each with its own unique treasures, enemies, and terrain obstacles. Your quest is to find the legendary treasure, the Orbs of Yendor. Collect one of them to win! Or just ignore your quest and collect smaller treasures.

The twist is the unique, unusual geometry of the world: it is one of just few games which takes place on the hyperbolic plane. Witness a grid composed of hexagons and heptagons, straight lines which seem to be parallel, but then they diverge and never cross, triangles whose angles add up to less than 180 degrees, how extremely unlikely is it to reach the same place twice due to practically infinite size of the world (centillions of locations in just 700 steps from the starting point), and how the world seems to be rotated when you do return. All this matters for the gameplay. The game is inspired by the roguelike genre (although in a very minimalist way), works of M. C. Escher, and by puzzle games such as Deadly Rooms of Death.

HyperRogue can be played for free from its website. The Steam version adds online achievements, online leaderboards, trading cards, and convenience. Also, as the game is constantly updated, the Steam version includes the newest features, such as new lands with new mechanics, or new game modes -- see Gallery for the current differences.

While we have worked a lot on HyperRogue recently, we concentrated mostly on experimental features; for people interested in the classic, core non-Euclidean puzzle-roguelike gameplay, the most interesting thing is probably the lands, and there have been no new lands for some time. Version 11.3, released on Steam and itch.io, fixes this. It includes three new lands, and has many other feature and improvements! 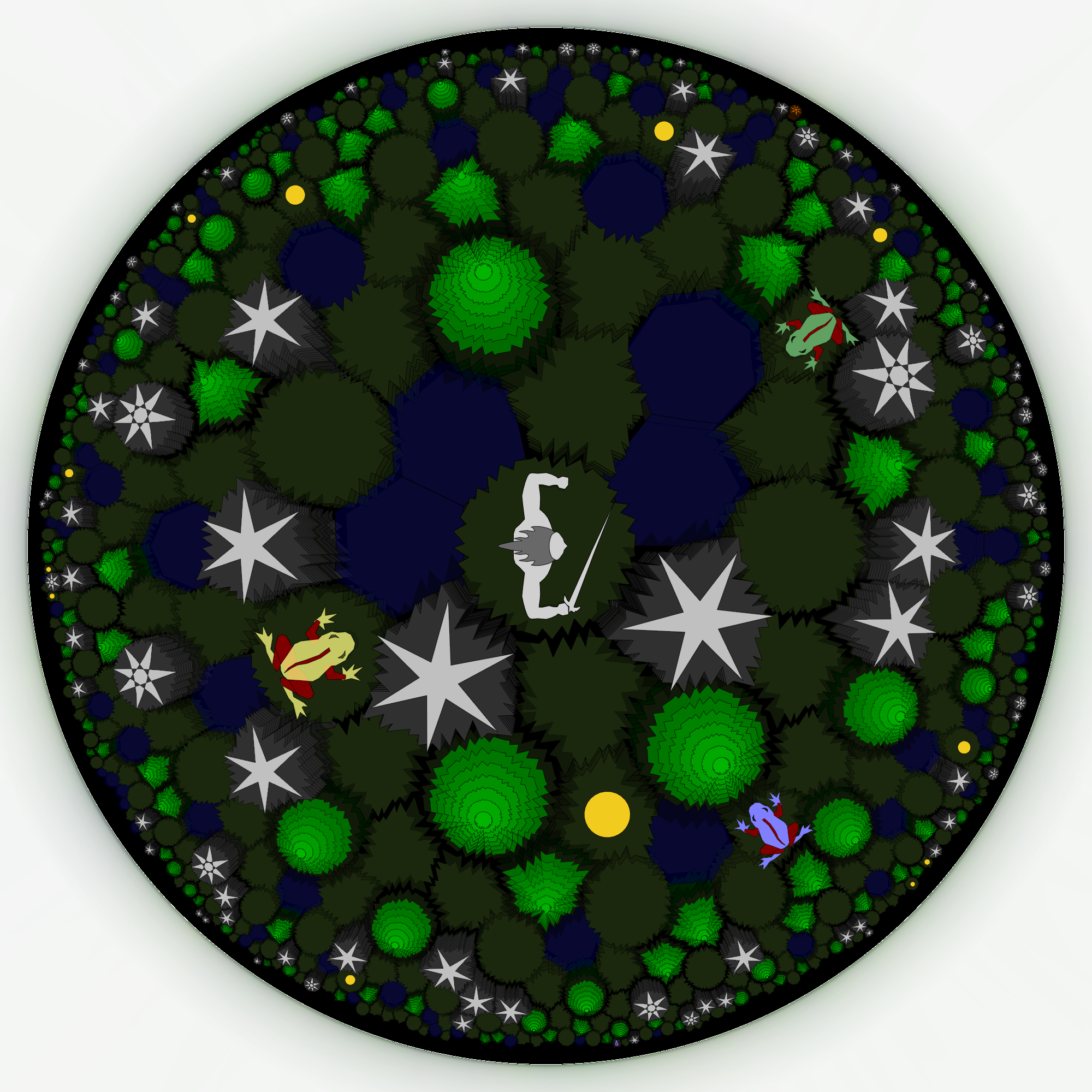 The Orb of The Frog existed in HyperRogue for a long time, leading some players to wonder: if there is an Orb of the Frog, why are there no Frogs? The Frog Park answers these comtemplations. It introduces not one, but three species of magical Frogs, each with different moving capabilities!Frog Park can be found when you have at least 30 (75 in Orb Strategy Mode) Dodecahedra, Tasty Jellies, and Onyxes in total. 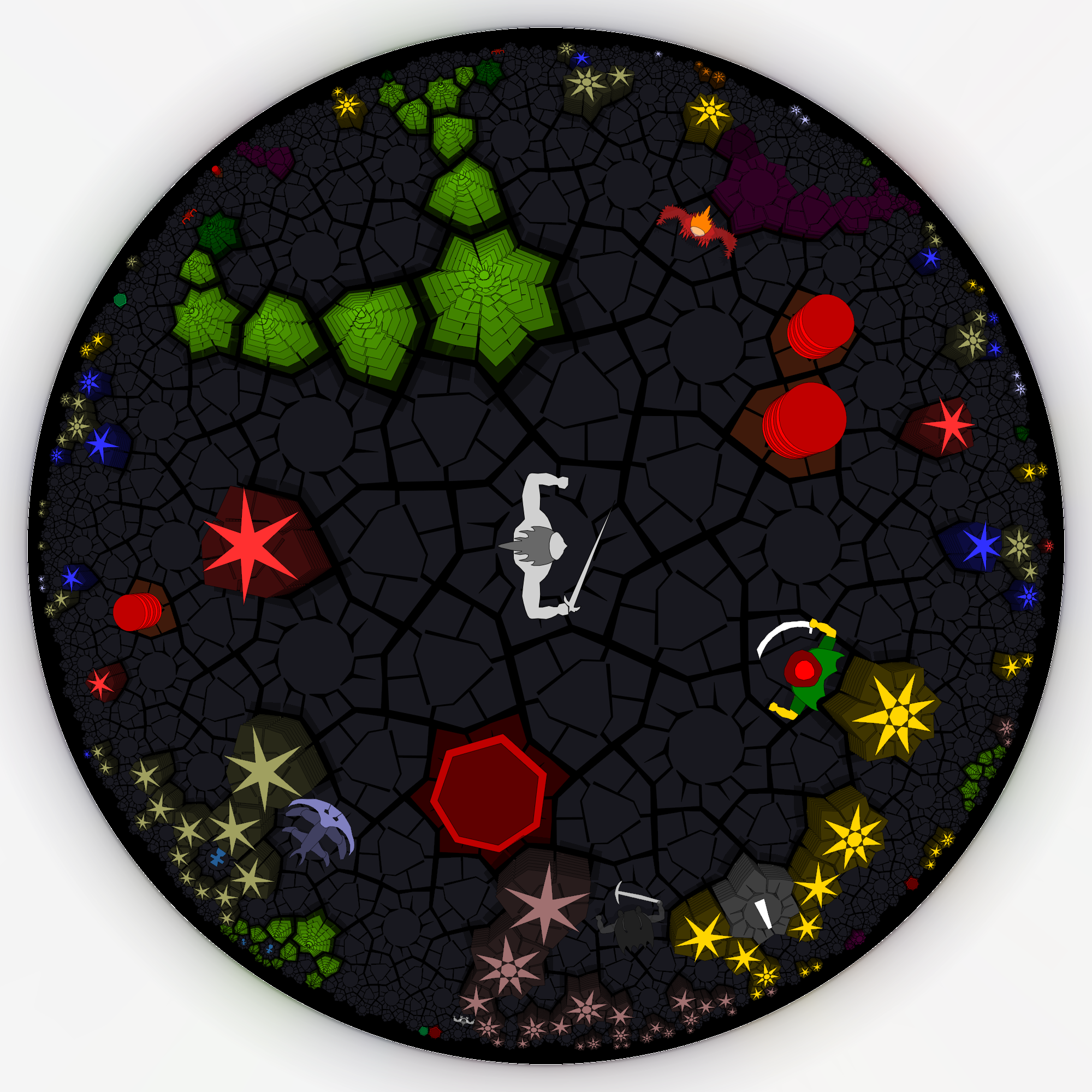 There was a Land Ranking Poll in the HyperRogue discord server, and the only thing that everyone agreed on was that the Irradiated Field was amazing. There clearly should be more lands like this!While most of about 70 lands in HyperRogue introduced unique mechanics (often unique not only to HyperRogue), the Irradiated Field combined many of them in a single land. The Eclectic City follows a similar approach, exhibiting terrain features from many other lands, from the unique electricity mechanics of the Land of Storms to wall switches from the Palace, from heights from the Red Rock Valley to melting walls from the Icy Land. Have fun!

Eclectic City can be found when you have at least 40 (100 in Orb Strategy Mode) Ice Diamonds, Fulgurites, Hypersian Rugs, and Silver in total. 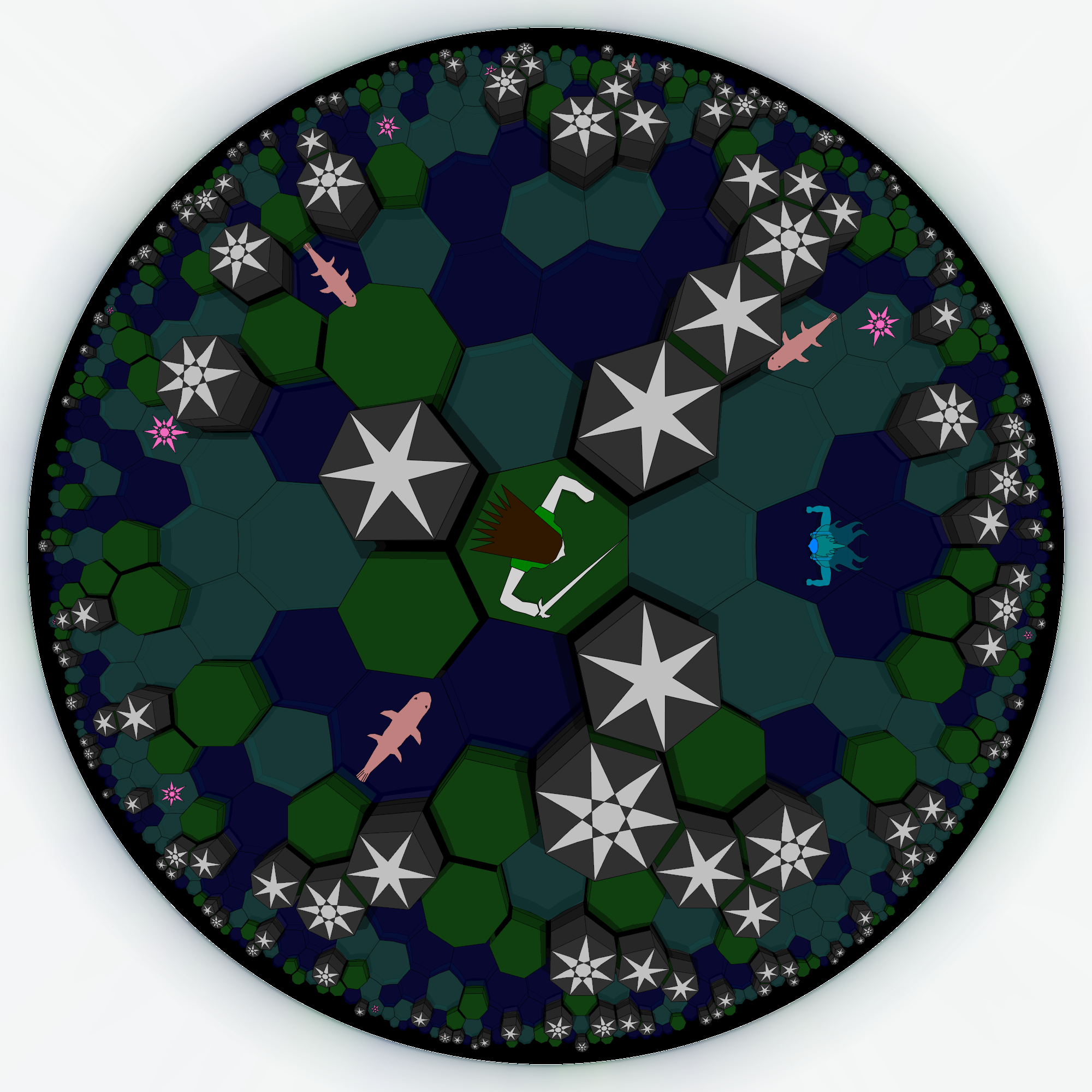 Wetland is available once you collect 30 treasures. Thanks to Teal Knight for the idea.

Other than the new lands, as usual, HyperRogue 11.3 includes many other new features! The Clearing is now more satisfying, as you are given the actual numbers of Mutant Ivy Leaves that are destroyed by your attacks. Whenever you see someone claiming that some Euclidean game is the biggest game ever, or that some Euclidean game has the largest boss monsters, well, these number should make it clear how wrong they are. The size of the HyperRogue world, measured by the number of tiles that you can potentially explore in reasonable time (few hours), without filling up your RAM and without running into weird numerical issues is a number with over 7000 digits! (This specific figure is based on numerical issues; it would be easy to remove them without sacrificing performance, but that will not help with reasonable time or RAM, so there is no point, and any Euclidean infinite game will likely start acting weird at much less than 100 digits.)

The recent updates concentrated on the experiments with three-dimensional geometries, including non-isotropic geometries that are not yet well understood by mathematicians. This update continues this work by introducing some new tilings and new interesting quotient spaces, and new alternative rendering algorithms; while the usual HyperRogue gameplay is less suitable in a three-dimensional world (or is it four-dimensional?), these make for making cool geometry visualizations and work well in the racing mode!Get HyperRogue version 11.3 from Steam or itch.io. As usual, the Steam version is updated more frequently, includes achievements and leaderboards, and extra modes such as the Strange Challenge. Mobile versions will be updated later. Join the HyperRogue Discord, follow ZenoRogue on Twitter, and have fun!

The latest version of HyperRogue let us play three-dimensional non-Euclidean worlds. However, there are more interesting geometries possible in three...

HyperRogue version 11.1 is released! While this release does not change the gameplay in the main mode, it lets you experiment with new display modes...

After an extremely long series of patch/preview versions (10.3a to 10.3v), it is time to release HyperRogue 10.4! While there are no new lands (they are...

Peculiar game, has her charm. Played on Android time ago.

Mac OS, unfortunately. If you do find out more about that, let me know

A binary package for OSX is available on the website :)

This game looks awesome! Too bad you have to fuss around with makefiles and stuff. I have no idea how to do that!

Thanks! What operating system are you using? A Windows executable is included, and instructions for Linux should be easy to follow. Unfortunately I have no access to MacOS, I only know that someone was able to compile one of the previous versions... so I cannot help you there for now.