After decades of tension, the Orin and Ageiran Federations are once again at war with the ITC and Caina Conglemerate. Border skirmishes are getting more and more common, all while a mysterious and powerful alien entity systematically destroys all installations and vessels in its path. In the frontier various corporations fight powerful pirate syndicates for power and control of the last remaining raw resources within reach, the empires rapidly exhausting the asteroids in their domains. Where do you fit in?

The journey from taxie driver to NGO superpower begins with a single step. You are a disgruntled employee of Skybus Interstellar, the world's premier taxie service, who has stolen their company issued ship and has big plans for the universe.

Intro
It's been years since I updated this game, and I have some exciting news to share! A sequel to 'High Albedo: Twisted Skies' is in development! 'High Albedo: Dark Frontier' will greatly expand not just the universe, but the gameplay options available. 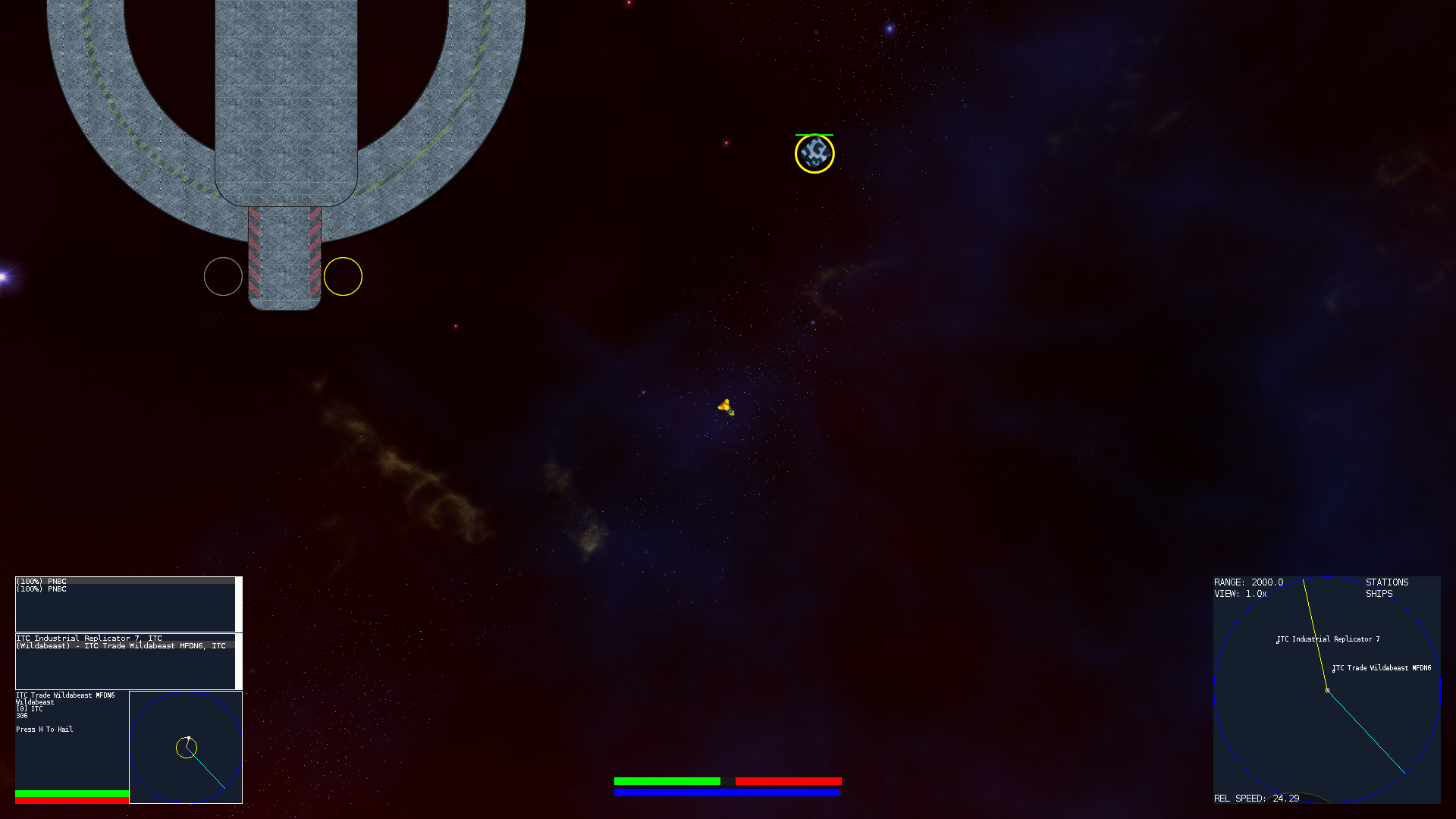 Although the game is far from complete, it is built atop the existing code base which means that I can polish what I have so far and share it with you! See the files section for a very early development build.

Disclaimer
I want to begin by saying that this is early in development. There are lots of plans, but most of them haven't been implemented yet. It's going to take a long time before I have anything that can be called a finished product.

Why?
So you're probably thinking, "Why is he releasing this if it isn't done yet?". The answer is simple: it offers massive engine and UI improvements over the existing downloads! The build being made available to you fixes many annoying issues from Twisted Skies, and offers a few exciting new features. Lets take a look! 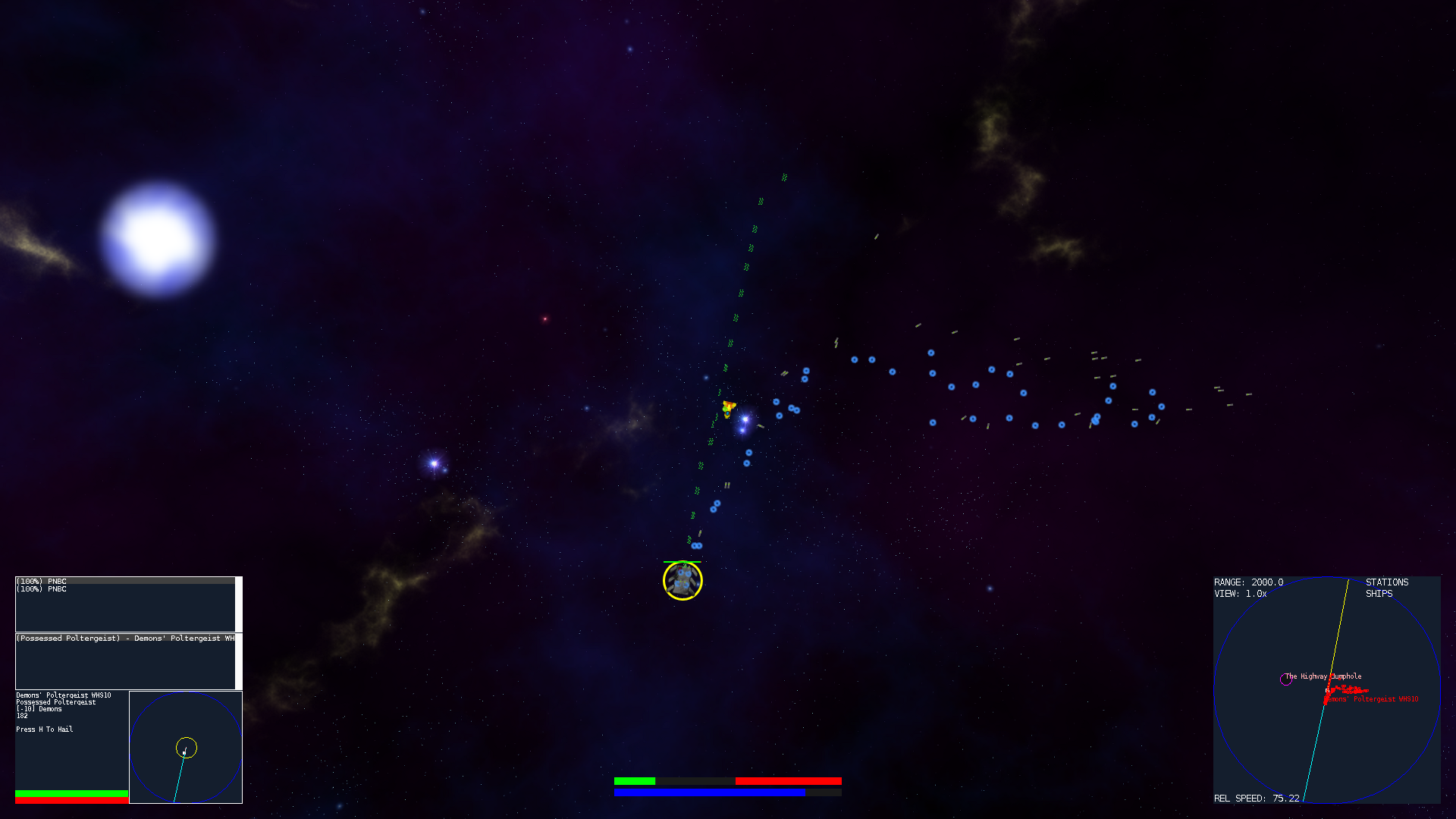 Frontier systems are accessed via transient jumpholes which are visually distinct from normal ones. These jumpholes have a mass limit and become less stable as things pass though them. Eventually they collapse and reappear somewhere else.

The frontier may provide temporary shortcuts between distant parts of the world, or access to unclaimed resources. However, a dangerous new faction lives there and there is a risk of getting trapped. 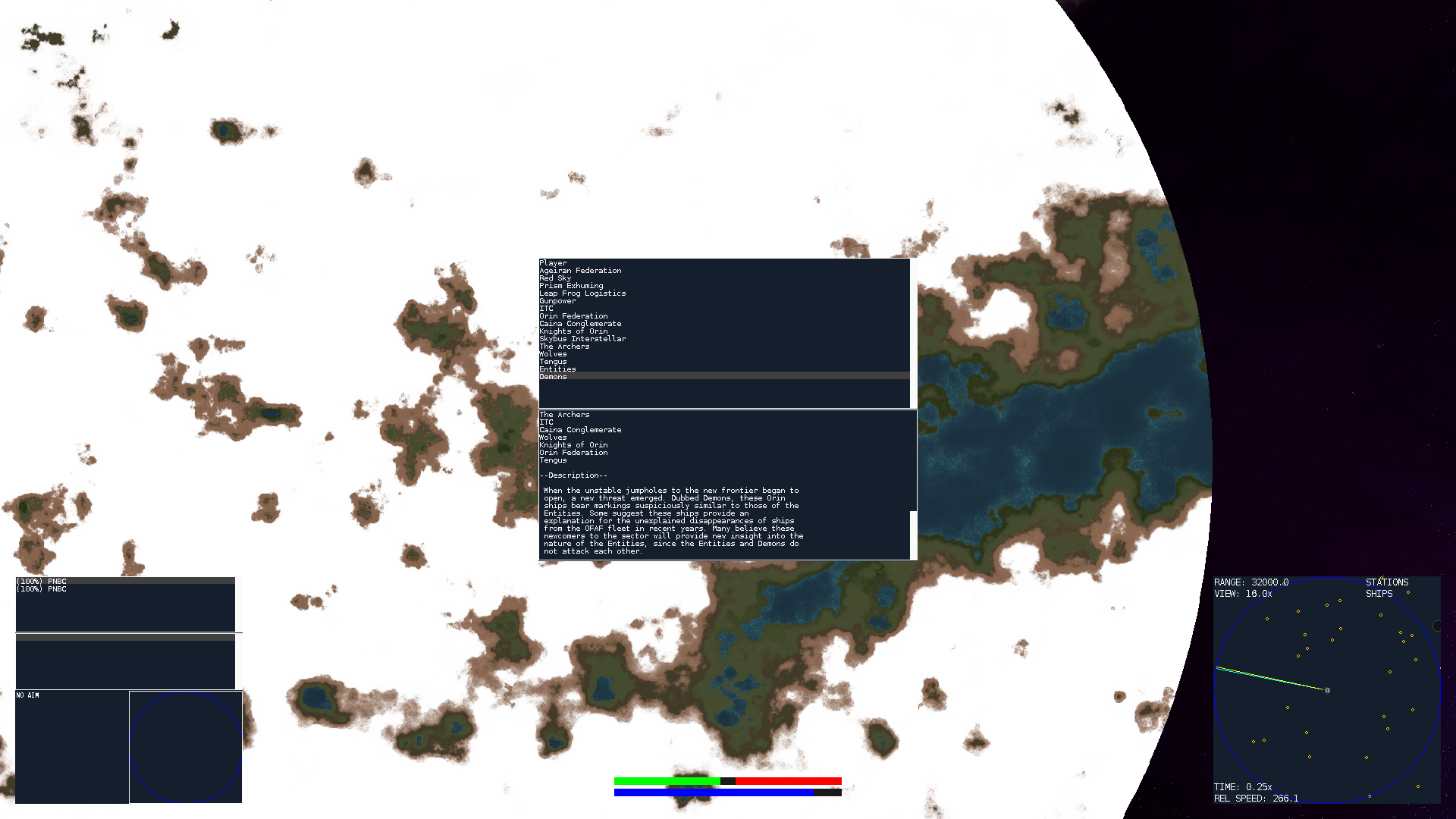 I have a lot of plans to make frontier space unique and worth exploring that aren't implemented yet. After all, it has to be worth the risk. You'll hear about these ideas sometime soon.

Note that these are NOT like the random unknown sectors in X3TC accessed via an unfocused jump. Those were garbage collected when you left and ceased to exist. This is more like wormhole space in EVE Online. It's persistent but you can't always find a connection where you want to go.

Demons
The frontier systems are the home of a new faction called "Demons". They are hostile to everyone except the Entities and fly heavily modified Orin ships. They use a mix of human and alien weaponry. Their ships are extremely dangerous and often make incursions into settled space that is connected to the frontier. 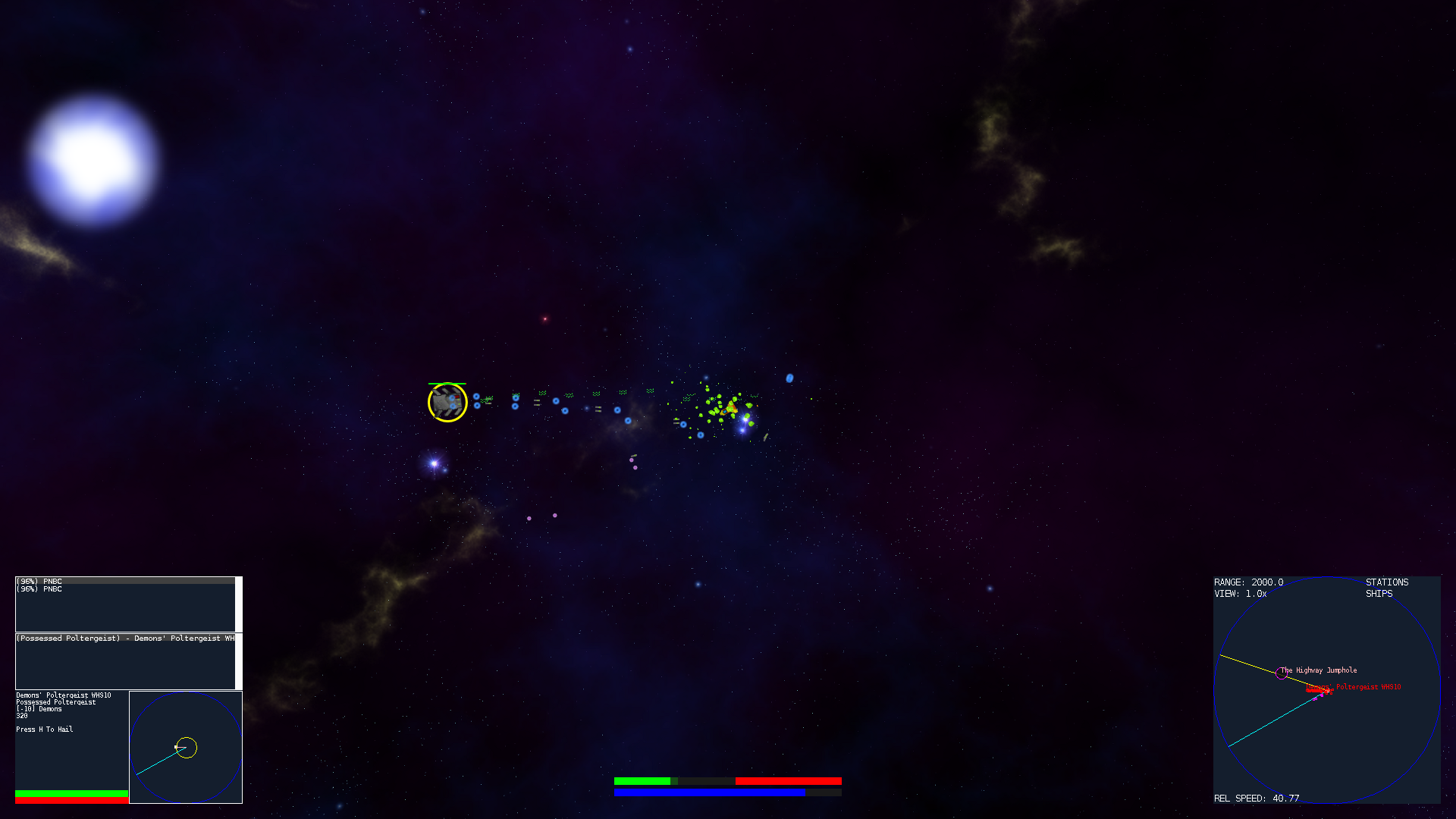 However, unlike the Entities, they drop weapons that you can actually use making it worthwhile to hunt them. Their ships may even bail, albeit rarely!

The Demons (and Entities) will end up being an important part of the currently unwritten campaign in Dark Frontier. Note that the Twisted Skies campaign is still in the game at this time.

UI Improvements
It's no secret that the UI in High Albedo has been somewhat rough to use. I suppose it fits in a way since the UI in the X series was pretty bad too, but I wanted to at least be bad in a Terran Conflict way instead of a Reunion way. 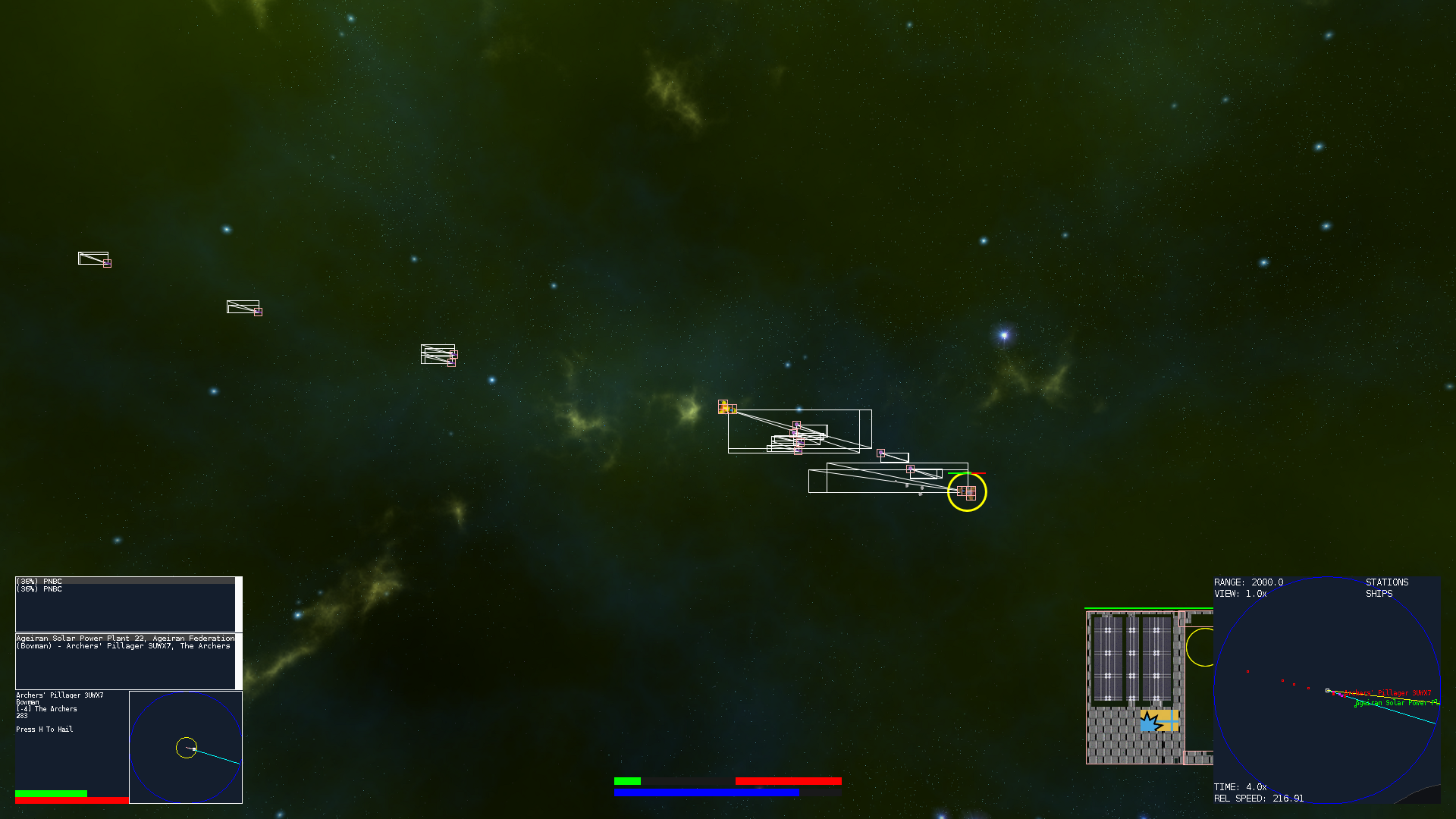 The roadmap for Dark Frontier of course includes a much larger UI overhaul, but that isn't done yet and certainly not in this build. However I feel these changes will make playing High Albedo much more pleasant.

Deferred Planet Rendering
This is a cool feature! Remember how you'd get a freeze when a planet first came into view? That was because the procedural texture was being generated on the same thread as the game loop. It was annoying and made exploring tedious.

Now planet texture generation is done on its own worker thread. When the thread finishes, the results are collected by the game loop. This means that you don't get any freezes! Textures are generated based on distance to the player with the closest planets first. This is to make the most easily seen textures available for rendering first.

You may encounter a solid pink planet if you beat the system. This pink planet is having its texture prepared and if you wait around it will appear.

New Collision Testing Algorithm
Twisted Skies used a very simple bounding box test for ships. This worked, but the illusion broke down when you had ships that were large and not square shaped. Now, the engine will automatically compute tightly fitting bounds for ships based on their texture and orientation!

This is very exciting since it allows ships to have irregular shapes without having to manually create bounds for complex hulls. Although it isn't pixel perfect (it can't be due to performance reasons) it's close enough that you're unlikely to be able to tell the difference. 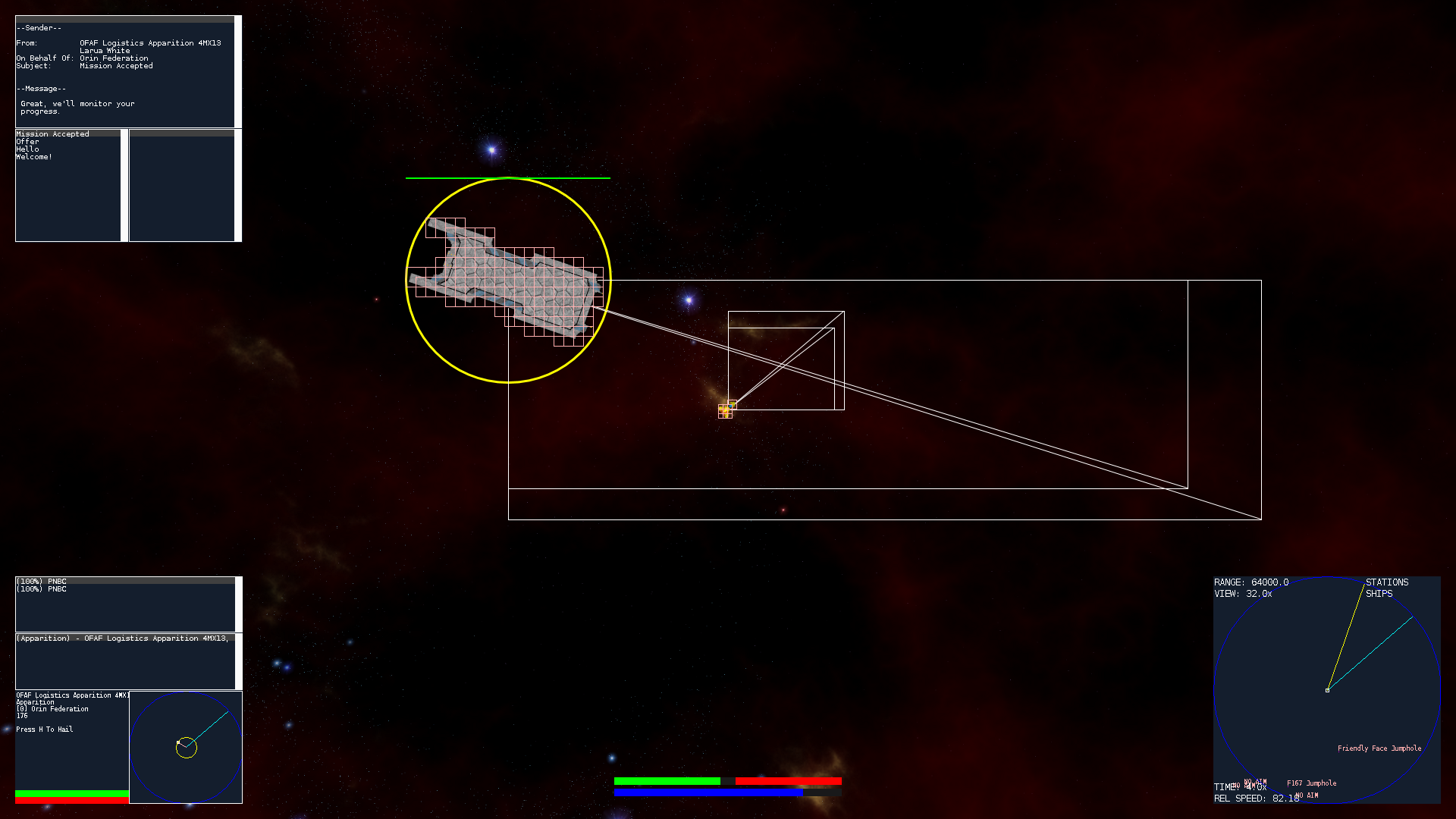 Note that stations still use manually specified bounds that can be found in "STATIONS.txt". This is because there's less incentive for me to convert that logic since stations at present never rotate and the more complex bounds do have a performance impact.

The gameplay improvement is amazing. For a minor performance penalty (most ships are small and need only a few squares to represent) I get accurate bounds for capital ships where the 1-rectangle approximation was obvious. This means you collide how you expect to collide!

Roadmap
You can see a list of target features here. Development is happening in this branch, so if you're interested you can watch the progress. As you can see, there's a lot to do! But I wanted to get some of these awesome improvements into your hands sooner.

I'm always open to suggestions. If you have any questions, comments, or concerns you can post them here or email me at "masternerdguy@yahoo.com". I value community feedback and want you to be involved in the creation of Dark Frontier.

Unlike Twisted Skies, which was developed in secret until the first release, Dark Frontier will be developed in a more early access sense where you'll get the ability to try new features as they become available and give feedback.

After taking some paid time off I was able to complete the campaign for High Albedo! This optional campaign will have a big impact on the world and your...

It has been a few weeks since High Albedo v1.3 was released, and I haven't been wasting time. I have begun work on the framework for adding custom campaigns...

After a mere 2 weeks of work, I am proud to release High Albedo 1.3, which is the finest build yet! This build improves graphics, improves AI, adds new...

So tonight I made my 300th commit to High Albedo. As you may know, I use GitHub as my version control system and my repository can be found here. Since...

Source code for the early development build of Dark Frontier. Contains all the stuff you need to alter the game! Requires JDK 8 and Netbeans IDE.

Source code for High Albedo v1.4. Contains all the stuff you need to alter the game! Read description for some details.

Source code for High Albedo v1.3. Contains all the stuff you need to alter the game! Read description for some details.

Hm:
-pressing F6 after the HUD/menus are hidden doesn't seem to bring back the HUD/menus, except those shield/fuel/hull bars on the bottom of the screen.
-(accidentally) pressing ESC means insta-quit anytime
-Saving: I clicked on an existing save game, but instead overwriting the previous save it instead create a new save file. Is it intentional?

current wishlist:
-customizable control+in-game help text/control layout viewer
-can the windowed resolution be saved in the future version?
-Engine trail/whatever visual indication of our ship's heading
-Also an exit confirmation when pressing esc should be nice

Third time trying to download the game; dunno if it's me, the ModDB servers, or the file itself. File partially downloads, quits, and saves as a .PART file.

I can download it fine. You can grab it from my GIT repository if you want, Github.com

It have some problems running game on Windows 8.

What kind of problems? I never got to test it on 8.

Game hangs for some time on menu screen. Then the radar and menus for in game actions don't work. Don't display any information.