This is unofficial patch for retail, pre-Steam, aka. WON version of Half-Life, which main feature is allowing user to set any resolution supported by the system when running in OpenGL or Direct3D mode. Field of view is also adjusted correctly for wide displays. The patch also fixes the error about the game requiring at least 16 MB of physical memory that occurs on some systems. As a bonus, the fix for incorrect MP3 files being played in expansion packs is included when using the undocumented MP3 playback feature in Half-Life v1.1.1.0.

The patch includes patched files for the following games/patch versions:

Select the game/patch version that you have currently installed by navigating to the appropriate folder in this archive, then extract the contents of the folder to your game's installation directory.

You may have to disable DPI scaling in Half-Life shortcut's properties in the Compatibility tab to prevent issues like game window going outside of the monitor if your display scaling is set above 100%.

Here are some interesting command line arguments that I found while digging through Half-Life's executable. These can be added to Half-Life shortcut's properties in the Target field after hl.exe, see Pcgamingwiki.com

The game defaults to running in 16-bit color mode. One of these can be passed to improve picture quality:

Ability to play MP3 files as a substitute for playing soundtrack from CD first appeared with patch 1.1.0.9. It's an undocumented feature that only became official with Steam version of Half-Life. Refer to the following list to see how to name MP3 files after ripping them from Half-Life CD:

Important: The MP3 decoder used in the old version of Half-Life doesn't understand ID3v2 tags commonly added by CD ripping software and such MP3s won't be played. Make sure your ripping software offers ability to use ID3v1 tags instead. They may also be omitted entirely.

FOV patch for Half-Life v1.0.1.6 and Blue-Shift causes the left and right sides of the screen to not black out when the game triggers that effect. 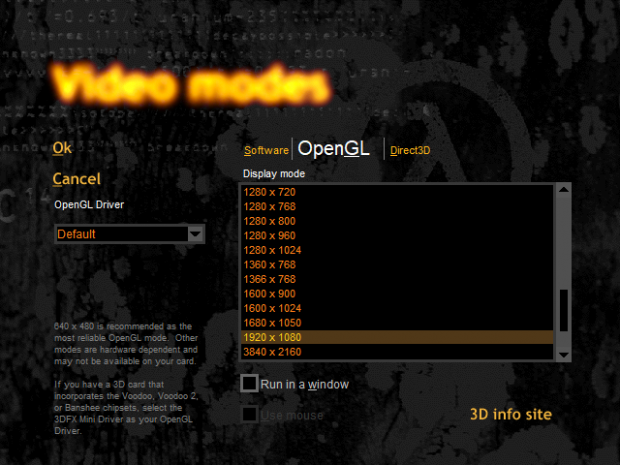 Wisely done! :) Must have thing for all WON fans.

Just the job, renamed all the the .mp3 tracks and running nicely now with correct monitor resolution and the music. Thanks very much indeed.
" If you can make it through the rocket test labs, you might be able to worm your way through the old tunnels to track down whatever's left of the Lambda team."

>FOV patch for Half-Life v1.0.1.6 and Blue-Shift causes the left and right sides of the screen to not black out when the game triggers that effect.

Still no solution for that, huh. v1.0.1.6 doesn't use textscheme, so beats me if it's even possible to fix it.

I don't know how to tackle that. There's something about internal workings of the older version of the engine that causes this to happen. Probably some value at another place must also be changed.

There seems to be no obvious reason for it to be doing this, any insight or a tweak I'm glancing over?

Thanks for this patch!

The game is not multi-monitor aware, so you'll always see the resolutions of the primary display. Another limitation on the game side is that its resolution buffer is preallocated and can hold 50 resolutions at most. Could probably be lifted (do we even have configurations with such large number of display resolutions?).

Are you running the game in Windows 95/Windows 98 compatibility mode by any chance? This does limit number of reported resolutions, the last ones on the list are omitted.

Aha! I have an uncommon audiovisual setup for my home system since it also powers a home theater and some diagnostic bays.

Bypassing the HDMI audio pass-through from my receiver (which passes through to a 1080p display) fixed the issue and now all resolutions (including Nvidia DSR ones) appear!

I did notice 95/98 compatibility was blocking some resolutions so it's good to know this executable doesn't require it.

Thanks for the extra information!

Do you have multiple monitors? It only enumerates resolutions of the primary monitor. Do you have compatibility mode set? If so, turn it off. There aren't any artificial restrictions in place regarding resolution. Works with 4K resolution on my end, although that makes the HUD ultra small.

thx4reply. i only have one monitor and compability mod is off. altough if i turn on DSR in drivers settings and enable any higher resolution i can see them in options. but game crashes when i hit ESC DSR resolution

I don't know how to help in that case since I can't reproduce the crash on my end.

So is the music without cd fix possible with the regular version of Blue Shift or is it only Blue Shift unlocked? Also great work with this fix, great for people like me who hate relying on steam for their games.

I haven't tried, but you could probably use DxWnd's virtual CD audio feature. You'll have to prepare the tracks according to its documentation then.

Yes. Blue-Shift is a bit special since it's a separate installation using separate engine files, so has to be patched separately; patched versions of those files are provided.

Or you can convert it to plain Half-Life mod with the help of Blue-Shift: Unlocked. Patching Half-Life affects mods as well. Conversion will also give you the ability to play music off MP3 files without having to use software emulating CD audio, since the separate (older) engine doesn't have the MP3 support.

So I ported the music from the steam Half-life folder to the media folder in my WON Valve directory.

No music. None. Is the Steam music not compatible?

Use Mp3tag software to remove tags from MP3 files, then it should work. The MP3 decoder that comes with WON version doesn't understand MP3 files with ID3v2 tags. Files without any tags or just ID3v1 tags are playable.

Can you make this patch for very first V1.0.0.5 version of the game? i want to experience the very first release with uncapped bunny hop and all that.

It's probably doable, but finding time for it is the problem.

Any idea how to fix this please? I have Win 10, I'm not running any compatibility mode on the exe either.

Surprised to see you have 4K resolution showing, yet mine can't show native 1440p option :(

Have you ever tried running 3DMark99 Max on your PC and does the desired resolution show there? I'm curious since it also uses DirectDraw's EnumDisplayModes method to get the resolution list. 3DMark99 will need the patch too: Drive.google.com

Still, the only limitation on Half-Life's side that I'm aware of is that it won't show more than 50 resolutions, so the first 50 reported get added to the list, the rest is ignored.

Another idea, Dege's dgVoodoo2 wrapper - Dege.freeweb.hu - see if the resolutions shows with it (and if its configuration utility displays it). The files DDraw.dll and D3DImm.dll from MS folder go to Half-Life folder.

Is it possible a version for HL: uplink could be created?

It might be possible (I'm assuming you're referring to the original demo with its own .exe), but I'm not sure when I'll find the time for these things again.

You can try installing Uplink as a mod to the existing installation. Since the old mod version seems to have disappeared from the internet, I've uploaded it here: Drive.google.com

Might be a good idea to put it on this site and other sites like this one sometime.

Appreciate the fast response! That was actually exactly what I was looking for. Thank you!

I guess in this case there's a greater chance that it works fine rather than it doesn't, but impossible to tell for sure without knowing what was changed.

Is this compatible with Opposing Force?

Opposing Force is technically a mod for Half-Life, so yes.

Hello. When I openning "hl.exe" it shows an error. It can't find "WONAuth.dll" even though it's there. I redownloaded and reinstalled everything including this patch but it still shows this error. What am I missing?
Edit: I also tried another resolution patch and it shows the same error.

i want to run this thing on my cs1.3 can you do it? your patch is awesome mate :)

It Crashes Whenever i try to Load game or Newgame