We're now available on STEAM as well as DESURA! Guncraft is a voxel first person shooter that boasts fully destructible environments, the ability to construct individual blocks or full structures in a single click, tons of killstreak rewards such as helicopters, jetpacks, bunker buster missiles, drones, and turrets, and a fully featured map creation tool that also features a Minecraft map importing function (using the Substrate XNA engine). Play traditional modes like Deathmatch and CTF, or never before seen modes like Lava Survival and Siege Mode. On top of that, there are standalone servers, peer hosted servers, eventual clan support and friends lists, in and out of game chat, leaderboards, and much, much more. Guncraft is the fully featured voxel-FPS you've been waiting for. Don't believe us? Play for yourself, free, in our open beta! 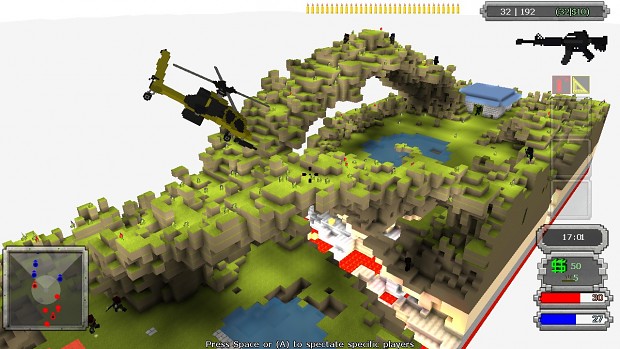 Gameplay on our community featured map Paradise, made by LTAcosta.