BlackFoot Studios’ premiere title; Ground Branch is based on the real life subsection of the Special Activities Division of the Central Intelligence Agency. The Special Activities Division typically carries out deniable covert operations on foreign soil and often goes into a situation before anyone else, before Special Forces, before the SEALs, before DevGru; SAD Ground Branch is the true tip of the spear. SAD Ground Branch operatives are mainly recruited from Army Special Forces or CAG units and are experts in field craft, surveillance, small arms, hostage rescue and Close Quarters Battle. 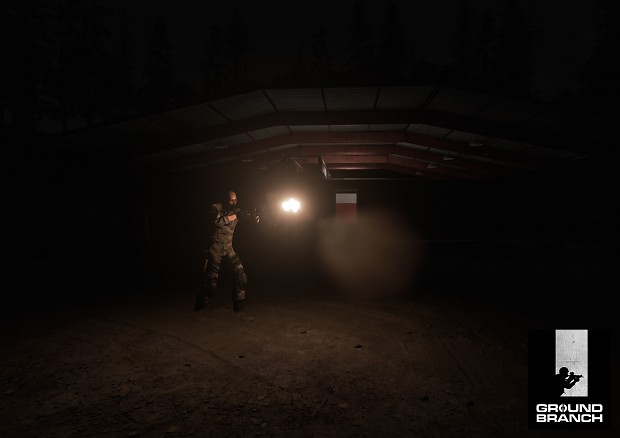 We are about 75% done towards the Alpha version. Hopefully released by Christmas.

We are starting out with a free version that will be single player with training maps. These will be the Team Room (a sort of lobby/gathering place/central hub), Shooting Range, Aircraft Takedown and Killhouse. Each of these maps will have various weather/day times as well as random target placement so plenty of replayability. Then, we will be doing our own Early Access to start off along side the free version. The idea is anyone and everyone can get the free version and mess around with it. They will get a very good feeling for what Ground Branch is.

If they then want to "buy in" they can do so in the early access from our site with some form of "pay what you want". This will get you access to regular builds up to the final release. Right off the bat there will be an additional map that will be used to prototype and show off all sorts of gameplay, features and whatever else we can think of. We want to stick with one map for a while so we can really get good feedback on the mechanics of things and not be sidetracked by worrying about map design just yet. Its pretty much a playground style map with a little bit of everything. A basic Terrorist Hunt style gametype will be introduced very soon after the initial release for this as well.

We do plan to go to Steam Early Access at some point, but Valve wants things to be a little further along. So if you buy into our early access you will automatically get a Steam when available.