Grave Danger is a 2D sidescrolling adventure game about utilizing unique characters to solve puzzles and stay alive. Run, jump, float, shoot, and scythe your way through puzzles involving teamwork and precision! Alternate between each hero: Dante the cowboy, Elliot the wizard, and Malice the reaper. Use their unique abilities to resolve different situations and make their way out of trouble.

Teamwork is essential in Grave Danger. Each character must pull their weight and traverse the world to safety. Dante is capable of climbing vertical walls. Malice can float horizontally across chasms and through narrow and dangerous areas. Elliot has magical elevation and can jump again once mid-air. 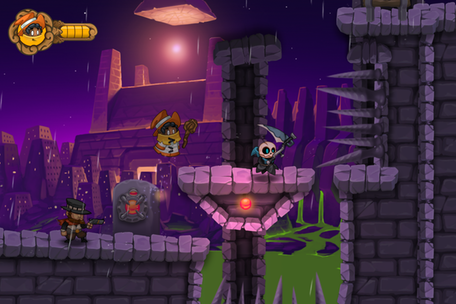 It's necessary to switch control of each character

Manage your party and keep everyone alive. Nobody likes a dead teammate. Don't leave your heroes unattended in a dangerous spot or they might get beat up! 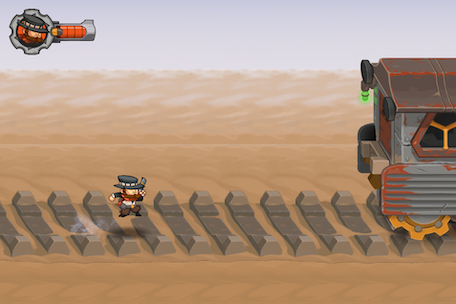 Wait, wait for me!

Grave Danger’s gameplay is about utilizing each character’s unique abilities to solve puzzles. The player will switch between these characters and master their movements and attacks, guiding our heroes further into the story.

The inspirations for Grave Danger are rooted in classic Super Nintendo greats: The Lost Vikings, Mega Man, and Castlevania. Campiness, problem solving, and teamwork stem from The Lost Vikings, while the fast paced combat and movement abilities of the Mega Man series keep it action-packed. The darker and spookier themes can be attributed to our love for the Castlevania series. 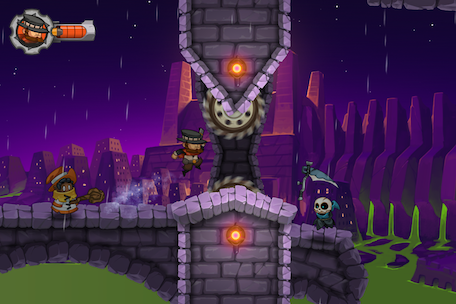 The world sure is a scary place, isn't it?

The anticipation of Grave Danger's release is just too much to handle! The next few weeks are chock-full of exciting things. Following our newly found presence on the Valve Steam store, we'll be releasing the Grave Danger Demo version. This demo will be available from our Steam storefront and will include the first few levels of content from the final version. This should give you a good idea of the adventures that await you in Grave Danger!

HOLY MACKERELS! December 19th is the official Grave Danger release date! All hands on deck! It's time to start our complete adventure with Dante, Malice, and Elliot! The unlikely trio are in a complete mess, and need our guidance to clear their names as outlaws. Grave Danger will be having a release and holiday sale it's first week, so keep your eyes peeled for it December 19th.

What's that? You heard me right! We'll be working hard on the Xbox One and Playstation 4 release for Grave Danger! This game is just begging to find itself on consoles for players to enjoy on the couch at home. We'll keep you up to date on our development here! Once again, thanks for checking in, and come say hello to us!

Get the scoop on the Grave Danger 1.0.1 Update that just released on Steam!

Grave Danger has been released on Steam for PC & Mac! Demo available too!

Grave Danger is now live on Steam Greenlight! Check us out and vote for Grave Danger to get onto the Steam Marketplace!

Thanks TheRogueLynx! It's been such a pleasure to make this game. Release is just around the corner on December 12th!

The Nightmare from Beyond Platformer