Gameplay is fast paced and responsive, fight your way through Dante's Circles of hell as you master both combat and parkour.

Each circle ends with an epic boss fight, testing your skills and forcing you to learn the hard way. This game is a roguelike and does not hold hands.

The environment is grim with dark humor undertones, ending each boss fight with a procedurally generated insult.

Go To Hell borrows its loot system directly from games like Borderlands, with weapons being generated from individual parts that effect its looks, stats and rarity. This system allows for an endless amount of possibilities. Want a multi-shot assault rifle with bouncing, piercing and lonely bullets? Sure thing!

There are also currently over 30 unlockable items that modify gameplay: items can drop anvils on heads, create spinning sawblades, spawn bear traps, attempt to stitch together enemies, and much more! And best of all, there is no limit to how many you can collect in one playthrough.

Go To Hell is currently being developed by Stevis Andrea. Tackling art, sound, programming, and everything from this website - to that gameplay trailer you haven't seen yet.

Stevis Andrea is a recent university graduate with too many ideas, and this is his first serious project. 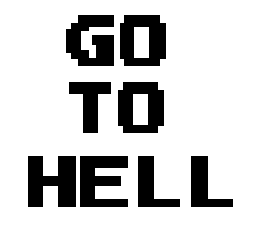 Go To Hell is a 2d roguelike platformer- taking inspiration from Risk Of Rain, Binding Of Isaac and Borderlands. It has a brand new indieDB page, along with a sneaky teaser trailer. Wet your appetites below.

The weapon system implemented in GoToHell is heavily inspired by games like Borderlands. Below I will explain the process of their generation, along with some juicy gifs to keep you entertained. This for people who are interested in the nitty-gritty of development, if not then you might want to skip the technicals and look at how shiny the gifs are.

The weapons are given a colour based rarity, much like many loot based RPG's. (White, Green, Blue, Purple, Orange, Cyan) And according to their rarity they are allocated an amount of points to "spend" on modifiers. (Completed automatically)

All together there are around 35 phrases that impact the stats of the weapon. These modifiers are also added into the name of the weapon.

Here are some cards displaying the stats & names. 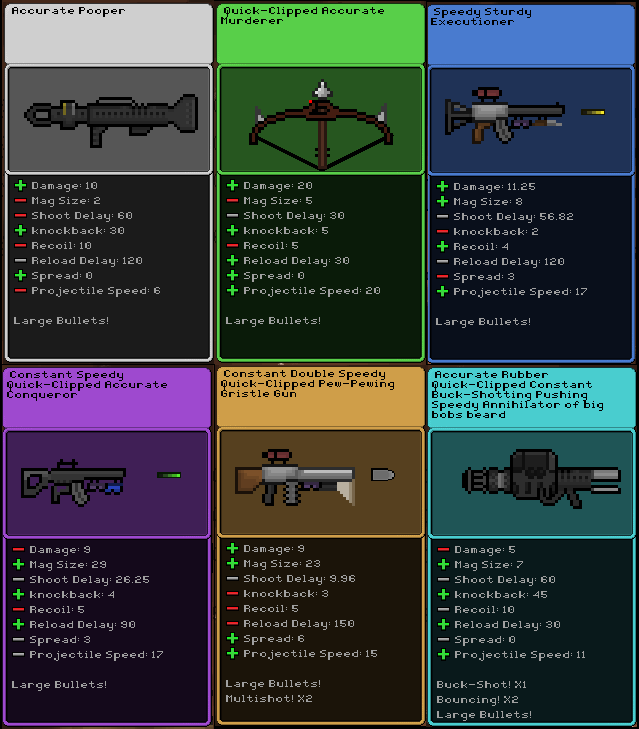 Modifiers are also worth an amount of points according to their effectiveness. More powerful modifiers are worth more points. So when the weapon is being generated it spends the points on the modifiers, that affect the stats. And the higher the rarity, then the more powerful, or more stats it can have.

So let's say a weapon is orange rarity (legendary), then it has 6 stat points to spend on modifiers randomly. it can either have 6 low tier modifiers (worth 1 point each) or two more powerful modifiers (worth 3 points each). And of course many other combinations.

There are also many other dependencies and tweaks within the modifiers themselves that are either random or change according to the weapon type. (Bow, Gun, Rocket launcher) But lets on get into that. As for the looks of the weapon, they are also generated procedurally. They are generated as follows.

The gun is divided up into separate images according the weapon type. (Stock, Handle, Grip, Barrel, Accessory, Sight, Clip) You can see this visually below. The same is of course for each weapon type, with different sprites to choose from.

All this amounts to an incredible ammount of variation in the weapons. Here are some of them in action.

Along with the vast ammount of weapons available in the game using the system above, there are also a ton of items. (Currently 36) 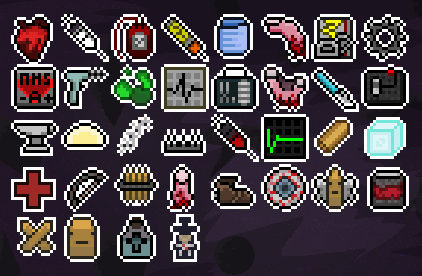 Items are the games way of modifying gameplay directly, without affecting the way you play. This is done by equipped items causing a with a variety of proc events. (Events that have a chance occurring when a specific action is preformed.)

For instance, once unlocked and collected, the ""Huckleberry bullet" causes a lock-on effect much like your favourite hero on that other game.

Another example is the "Medical Saw Blade" item, it has a 5% chance of spawning a spinning blade when killing an enemy. Enemies that contact the blade take bleed damage.

Furthermore items can also be powered up in the menu before starting a new run, allowing players to choose 5 of their favourite items, giving them a 5x drop rate! This adds some strategy to the game, allowing users to think hard about what items complement each other.

That's an overview of the weapons and items as well as some other technical gibber-gabber. More articles will be posted in the future about Go To Hell, but for the time being you can follow me on twitter, like the facebook page, or contact me to say hi.

I'm a one-man team, and marketing is haarrd, so help me out. Yeah? I'm looking at you feillyne. :)

Gerel: Against The Corvus Empire Platformer