Flashbike Arena is a UDK iPhone and iPad game which features the next generation mobile graphics of Unreal Engine 3 including next generation shaders and rigid body physics. The game itself is a third person arcade style racing battle where you ride a futuristic motorbike that leaves a colored wall in its wake. Causing other players to crash into your wall or their own earns points. Additional points and multipliers can be earned by collecting the “energy cores” left behind as the wreckage of a fallen adversary. These energy cores are how the bikes get their power and generate their walls!

Two Gear is thrilled to announce their first iOS game, Flashbike Arena, has been released and is now available for iPhone, iPad, and iPod Touch! Flashbike Arena is a single player arcade style game developed using the UDK. Get it Here!

In Flashbike Arena you control a "Flashbike" which leaves a colored wall behind it. The goal is to earn points by causing your enemies to crash either into your bike's wall or their own. As seen below Flashbike Arena is launching with Game Center support including unlockable achievements. 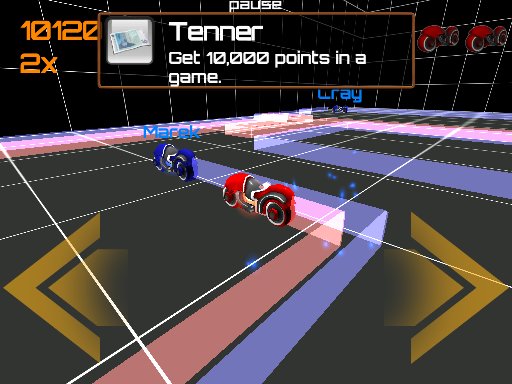 In Flashbike Arena when an opponent crashes an orb appears. This orb is the core of the Flashbike, which powers it. The key to earning maximum points is to collect these cores to earn point multipliers. The more cores you collect consecutively, the higher your multiplier will be, up to 8x! 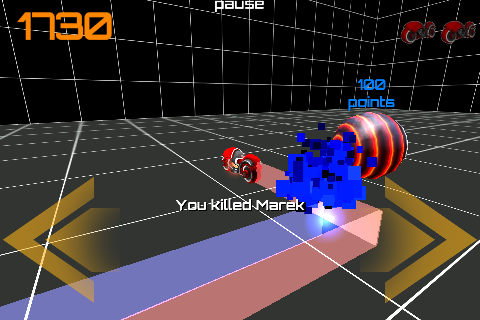 To give a better idea of the gameplay we've also released a video of the in-game tutorial which was created as a Kismet sequence.


Flashbike Arena was developed by a 3 person team, we'd love to hear any feedback or suggestions to help us improve the game for future updates.

I remember a really really old pc game which was basically the same.
It was fun though!

in normal times, this type of game is great. I hope it will be great too

If you want to give it a go, it should be out on the app store on 9/20. I basically programmed the entire thing in my basement so if you want to see any new features, let me know and I'll put them in the next update :) .

Yeah, it's a Tron style light bike game. I've just added some screenshots so that should give you a better idea. It'll be released soon so check it out if you're into Tron or even know what Tron is...personally while working on Flashbike I learned a ton of people (friends and family) have never heard of Tron, lol.

so its like tho old cyberbikes game, and tron?

Yeah, just a good old straight up tron cycle game. The main differences are that you gain speed by getting closer to other bike's walls so you can try and cut them off. Also, a rigid body orb pops out after you destroy another bike and you can collect them to get points and multipliers.