EXO ONE is a surreal, exoplanetary exploration game currently in development for PC.

In EXO ONE, focus is shifted away from traditional sci-fi and space game tropes, such as space combat. Instead, it encourages a relaxed state of flow by using a gravity-based movement system to traverse and explore high sci-fi planets.

EXO ONE is, and continues to be inspired by the many discoveries of the Kepler space craft, and the mysteries of what may lay out in interstellar space for future explorers. 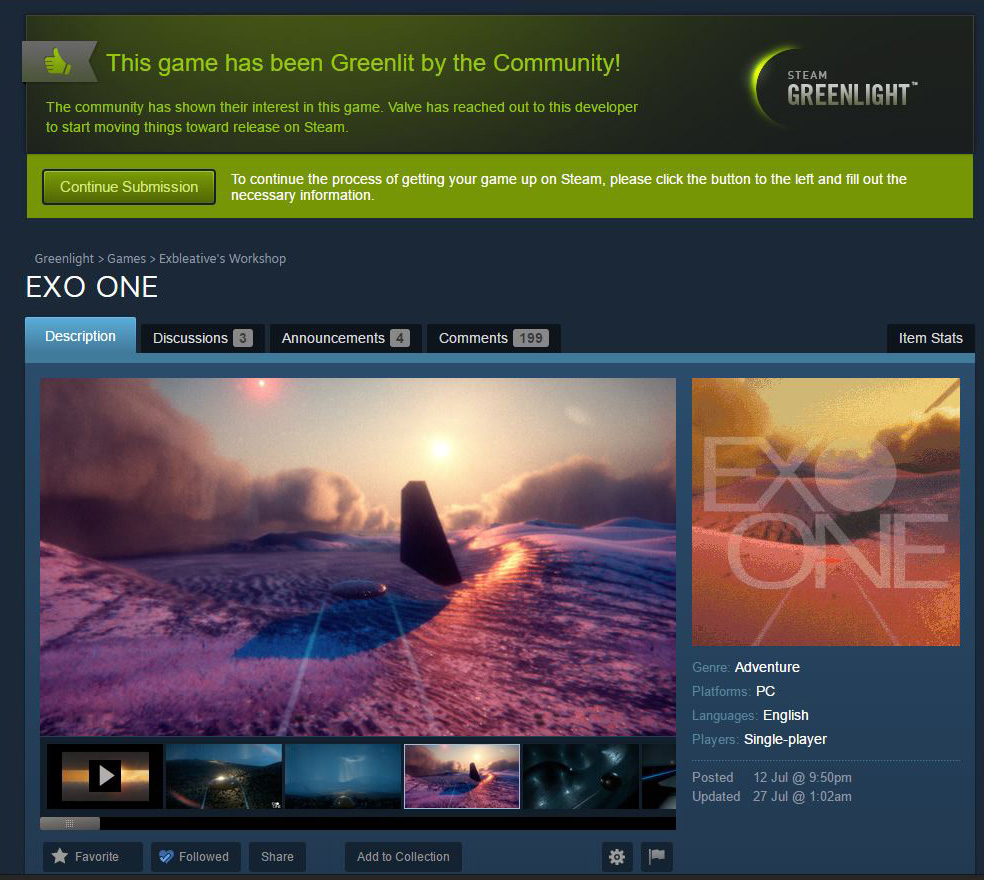 EXO ONE has been Greenlit, making it to #26 (24 at its height) in 2 weeks. You can check out the EXO ONE Greenlight page here.

I began the Greenlight process with practically zero fan base. The games I’ve made prior were on different platforms in different genres and from different companies. Perhaps outside of family, friends and old work friends, I might have had a dozen or so fans following me on Twitter (maybe).

I released a teaser alongside a game announcement press release on GamesPress on the same day the Greenlight went live, and I hand emailed every games website I could find who had covered similar games to EXO ONE. I would direct most of these emails to a specific author, mentioning in some way, shape or form that I was aware they either liked the genre or had reviewed a similar game. I received two replies from probably 50 emails, both saying essentially, “looks interesting, let us know when there’s something playable”.

Here’s the teaser I made using 100% in game footage. Music was by Rhys Lindsay, which, since it was made for the game, really fit perfectly with the mood I wanted.

This netted a total of about 500 views on Youtube in the first week, which is ok, I guess. Clearly not a hit or anything, however. I put a ‘vote now on Greenlight’ annotation at the end, and figure I can swap that out for whatever I’m promoting next!

Within the trailer, I spent exactly zero time showing my Exbleative company name or my own name and instead went for opening directly to a mysterious looking structure behind some pretty clouds, then went from there. The game is all about the vibes, so I pushed that mystery/melancholy angle as hard as I could while splicing in a little bit of gameplay.

While it would have been nice to see the video do so well on Youtube that it brought in Greenlight votes, it did at least singlehandedly take me to #26 on Greenlight, which I’m fairly proud of. I got some really positive feedback on Twitter from some people too:

I'm still thinking about the teaser for Exo One by @JayWeston. Haunting:Youtube.com … #GameDev #IndieDev

I used these guys to handle my press release since they had a reasonable fee, Gamasutra used them and so does most of the industry it seems. I also just really wanted to cover all my bases. They were super quick on email and I felt like I was dealing with real people, which was nice. You can see below how many views I received compared to the average, and compared to the best (who already have huge followings). I think if I had something playable, or perhaps just more gameplay footage, this would have been more helpful. 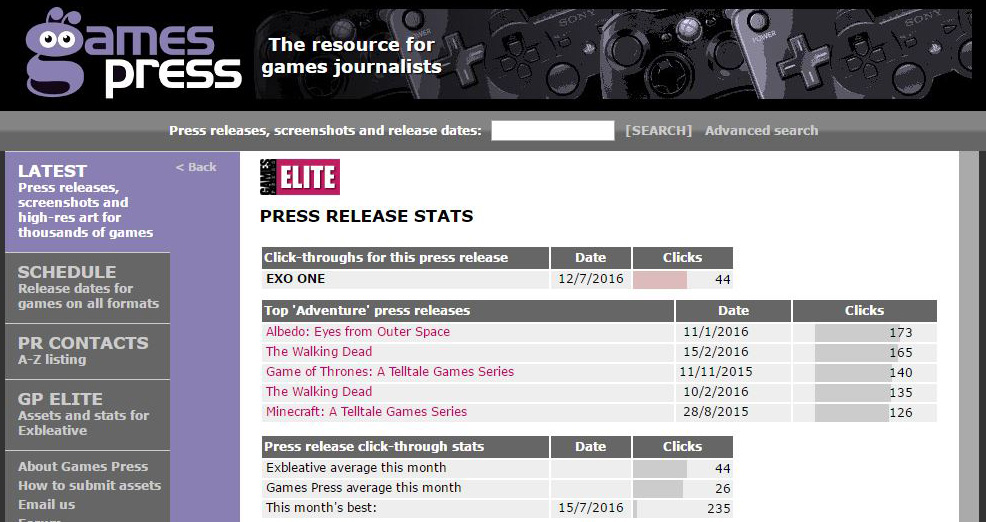 Here’s the press release itself.

You can see I did almost twice as good as most ‘average’ press releases, and really not too bad even compared to big name releases like Minecraft and The Walking Dead.

After sending my press release through Games Press and hand emailing everyone, I appeared on around 6-7 websites from several countries, which was nice, but it wasn’t exactly a feature on Rock Paper Shotgun or anything. For the most part, I got some repostings of my trailer or quick write-ups that used the press release pretty heavily. I need to mention here just how grateful I am for these, don’t get me wrong! For all I know, I got a lot more traffic from these sites than I thought. It *is* a mystery to me where half my traffic came from (see Google Analytics below).

In the future, I may be writing any releases in a more ‘reviewer’ tone, which might sound more natural if copy pasted. But of course, actual hand-written reviews are slightly better! I put down the lack of coverage again to just not having something playable people could get their hands on. Even with what I think was a quite good trailer, it’s still just a trailer and low on the gameplay and story as well.

The game followed a straight line trajectory that barely seemed to accelerate or slow, until the last 2-3 days where we hit 24 then 25 then settled on 26. I assume this would be due to the top 25 having a steeper trajectory of yes votes than EXO ONE, therefore making them perhaps unbeatable without outside press coverage or a larger audience. But I don’t feel any of this matters much, I was very happy once we hit top 50. Greenlit is Greenlit!

Interesting, all the different trajectories! You can see for some reason even the #5 item isn’t Greenlit yet, after 30 days. I’m assuming the lines disappear once a game has been Greenlit! I’ve also spoken to fellow devs whose games did not even reach the top 100 (not even get 50% there) and they were Greenlit. The mystery process remains, I suppose! 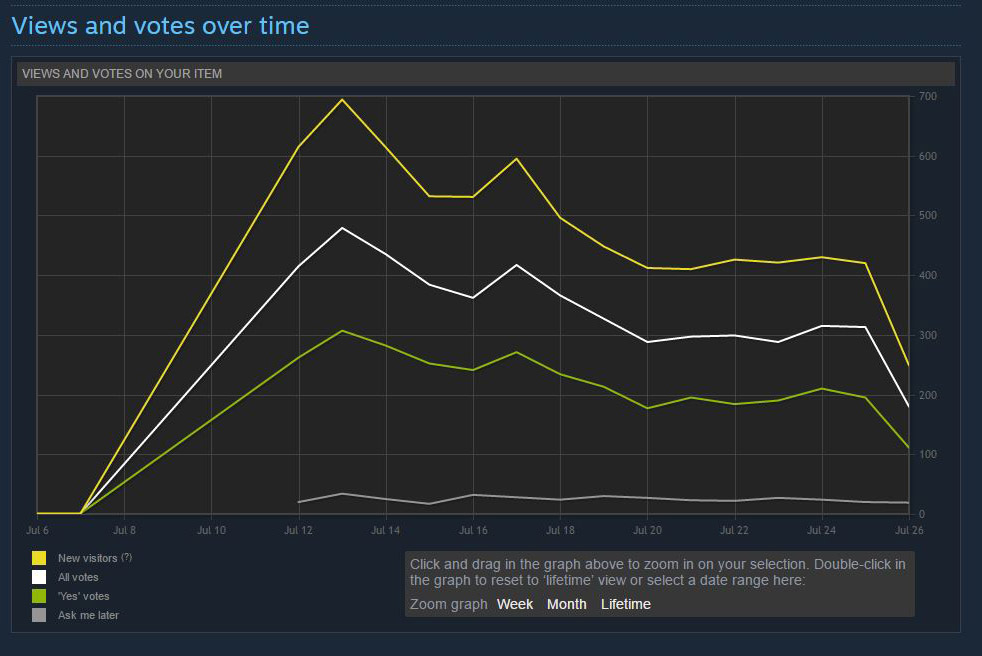 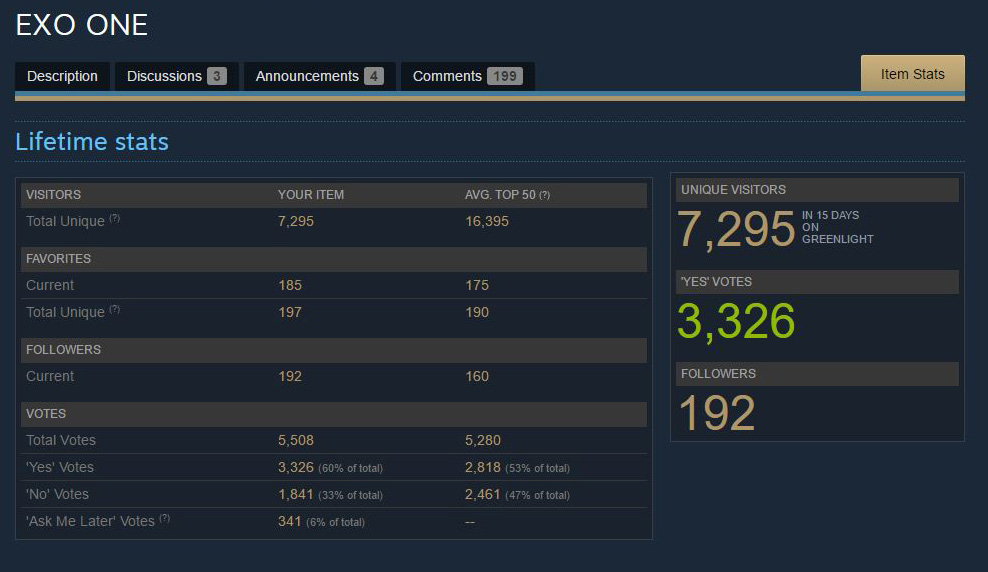 The yes to no ratio looks nice, and I think it is decent, but the AVG TOP 50 also seemed to change a lot from day to day. Sometimes I’d see stats like the above, most of the time it was similar to mine, and sometimes it’d be higher than me, around 63:37. I mostly lagged the Favorites and followers most of the time compared to the top 50, perhaps again due to the lack of clarity on what the game was.

These figures are roughly a third of what I’ve seen other bloggers mention in the past as a ‘minimum requirement’ to get Greenlit or into the top 50.

I got quite a few comments like, “this game needs a story or it will be boring”. I imagine this is mostly from people that didn’t read the description. Probably no one will, so if you want something communicated, you want to do it in the video.

I really enjoyed reading the feedback, though, and in one way I’m glad “it’s all over” because I was becoming a serial refresher, but once the campaign was over I missed all the interaction and waking up to check my rank every day (not really, I checked way more than that)!

I would have liked to have seen more discussions crop up around the game as well, however, I got practically none. On the one hand people seemed fine just asking questions in the comments, but on the other hand, I did notice other titles receive a lot more than me. Once again I believe the lack of gameplay and story shown was a probable cause of this.

I’ve read people going to quite the lengths to get on as many lists as possible, but I managed to get on 10 (good or not, I’m not sure?) without doing anything at all. If you are struggling to get into the top 100, you might want to look into getting in touch with some relevant ones.

I hooked up analytics and apart from noticing some obvious stuff like almost half of my audience being Russian, I couldn’t make sense of the Direct VS Referral stats: 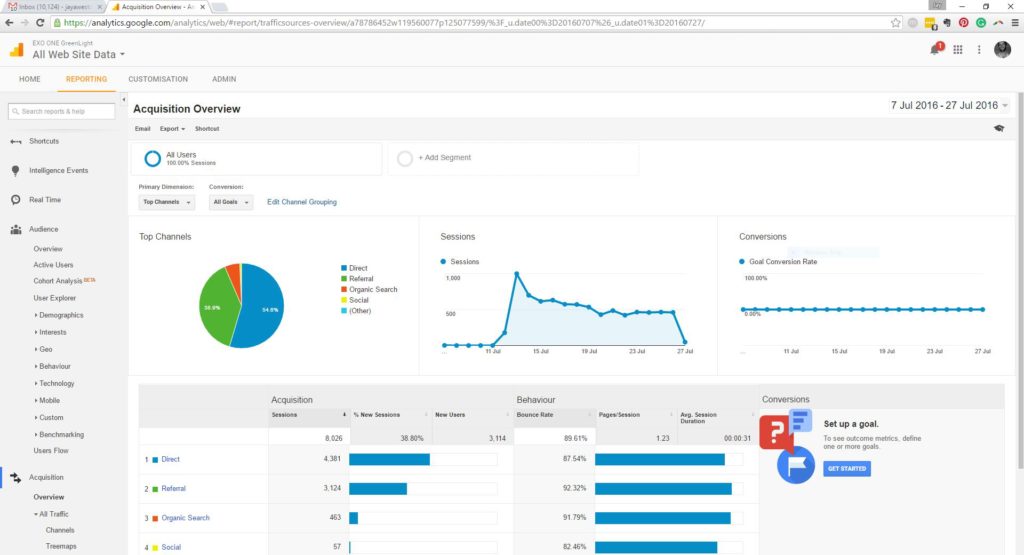 Direct traffic went straight to the EXO ONE Greenlight url from (?). Referral traffic was mostly from Steam itself (store.steampowered.com) with a smattering of what looked like people linking to it from Dota2 discussions from streams, CSGO lounge and GamesPress.

If you understand this I’m keen to know, is Direct traffic coming from people clicking a browser link which opens up their Steam client, which appears as Direct Traffic?

I showed EXO ONE at a local anime and video game festival here in Adelaide (AVCON) which happened 4-5 days after my Greenlight began. How many of the people who played the game and voted, I don’t know, but there was a little upward blip over that weekend visible around the 17th. I got around 30 newsletter sign ups from the event too, and it may be safe to say a similar number of Greenlight votes.

I thought AVCON may have added some ‘legitimacy’ to my campaign. If someone at Valve is checking to see how serious your game is, having taken it to a festival I can imagine is a bonus. So too would be things like:

What Does a #25 Greenlit Game Mean?

If I was an excitable person I might have lept up and down a lot after getting Greenlit, however how this translates into actual success is anyone’s guess. How much does my audience carry over when the game is made available? 190 followers isn’t a huge number, so at the end of the day I feel like this might be the equivalent of adding that many people to my newsletter list. Of course, with the added benefit that I can now release my game on Steam, which is no small thing!

Now I just have to make the entire game, market it successfully, play test it, release the alpha on itch.io, then on Early Access or a full release on Steam… “Ez!”.

If you wanna follow along on the ride and be notified upon release, trailers, alphas and betas, you can sign up here. Here’s the EXO ONE game site.

Also if you’re curious what a number 1 Greenlit game gets, “Scorn” managed 2000 comments (10x mine) and I imagine probably 10x everything else, as well! Once you reach the top 100, I imagine the closer you get to #1, the more vertical the climb required to get there (see #5 above).

Flying to show EXO ONE at EGX Rezzed Leftfield 2017

EXO ONE was selected to be part of EGX Rezzed Leftfield 2017, which will be in London from March 30 - April 1st. I'll be flying over, so if you're going...

Adelaide’s video game and anime festival (AVCON) just finished last week and it was an amazing experience. I showed EXO ONE in the Indie Games Room...

Following on the heels of a successful EGX Rezzed with coverage from the likes of Edge, Eurogamer and RPS, EXO ONE is now live on Kickstarter!

Here's everything that happened during my trip to London to show EXO ONE at EGX Rezzed 2017. I cover pre-event stuff, emailing press, meetings, and the...

Indie
Twitter
Tags
Embed Buttons
Link to EXO ONE by selecting a button and using the embed code provided more...