Evochron Mercenary is the sequel to Evochron Legends and rounds out a trilogy in the series culminating in the game with the highest level of technology and most extensive feature set. It is a first person 3D space combat, trader, and exploration simulation with a primary focus on 'lone-wolf' survival gameplay. 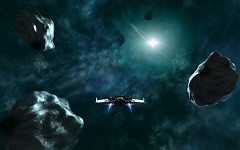 
The update can also be downloaded from the game's website here: starwraith.com