Ensign 1 has launched a kickstarter page, allowing other indie gamers to advertise on space billboards.

Edit 11/3/11
The prices on the Kickstarter rewards have been reduced. You now have a chance to purchase our last game Helena The 3rd for as little as $1. We've also lowered some of the advertising costs.

The team working on Ensign 1 would like announce that we now have a Kickstarter page up for people looking to be early supporters.


In addition to offering early access to the game, we're also letting users donate to put advertisements in our game. If you have an indie game you'd like to promote, and like the idea of seeing your game on a space billboard, then consider letting us help you out! We're also allowing supporters the chance to design their own rooms in one of the space stations which will be in the final game. 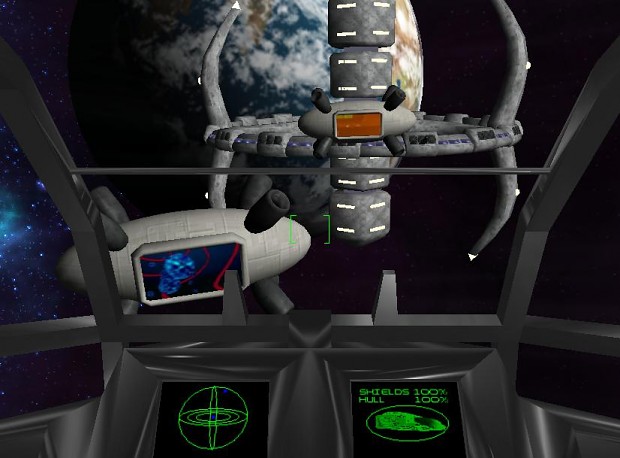 Game Updates
Game wise, a few things have been happening. I've been working on the game engine, making it possible for players to exit their ship and walk around larger space cruisers or space stations. I've made a lot of progress there. You can leave your starting ship, walk around it in the docking station, and look outside at the space scene beyond. Rustybolts, my level designer, has been hard at work making sure there is a level to walk around in, inside the giant space carrier Ensign. It isn't complete yet, but he's been making great strides.

On the graphical side of things, I've added a few new touches. The game now uses a skybox to draw stars and nebula, vs the GL_POINTS from before. We now have rotating planets with cloud cover, and a nice little sun to provide lighting. The interior levels have also been updated with improved lighting. 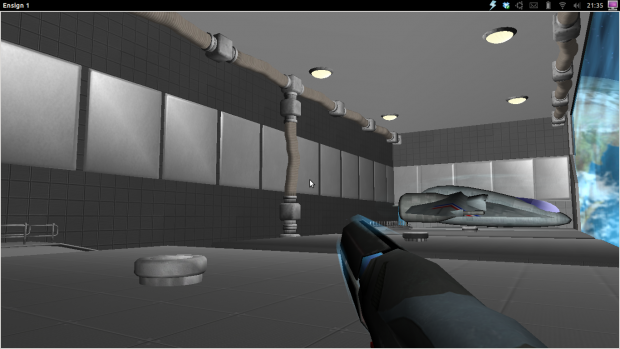 Although players can leave their ship and renter it, they still can't pilot other ships than the one they started with. That's next on the agenda, that and being able to combat other players inside of Ensign.
I'll also be slowly improving the graphical side of the engine, by adding features such as lense flare and halos around lights.

So while I'm working on those things, Rusty will be continuing to push out great new levels and models, hopefully by the next update the game will start to really be playable!

Please don't use Kickstarter, especially on ModDB/IndieDB when Desura is perfectly able to facilitate this function. This is for your benefit and for our protection, plus it gives back to the community through supporting Desura as opposed to Kickstarter who could care less about us. We've had bad experiences with Kickstarter so please rely on alphafunding via Desura if you require funding as this is precisely what it was designed for. Best of luck on your game, it looks great.

I try to discourage developers using Kickstarter. Desura should be the go to place for this kind of thing from now on.

actually I see you meantioned you're using kickstarter to fund it until you get to alpha funding. This kind of seems a bit redundant as is, you shouldn't need to be doing that, its too early to begin asking for money.

Just curious, are you affiliated with Desura?

I'm glad you approve of our game nonetheless!

No but I do work in the industry. I want you to be successful, but in a way that ensures everyone benefits and everyone can trust each other. Something that we've all found lacking in Kickstarter, hence why Alpha Funding was invented. I initially put the community funding idea forward, so I feel its necessary for me to defend its use.

Well I wouldn't worry too much. If I were a betting man, I'd say that the Kickstarter won't go through anyway. It will just have given us some promotion, and then we can decide to go through with an alpha-fund version or not.

Please take some of the ideas from freelancer, Possibly some of the systems from Eve.. This has much potential if done right...

Freelance, elite and Oolite are among my faves also