This minigame became a tribute (it didn’t start that way) to Neil Armstrong. We were in Beta stage when Neil died (a few days after Curiosity landed).There are two modes of playing: Accelerometer and Keyboard.
The first mode uses the accelerometer integrated in your mobile, in case you are playing it on a mobile device.The Keyboard mode simulates three buttons in the lower corner of your mobile. If you play the game online, the usual keyboard buttons can be used (Up, Left and Right arrow keys).Every mission has spots to land with different difficulties. The more difficult to land, the more points you gain.In the not-so-far future more mission will be added with more obstacles and features.

So after getting the approval from Apple on DYNOSTIC v0.2 we decided to make some adjustments to the game. First off we changed the game engine we were using. The previous versions were done using Game Salad, which allowed us to release the game for iPad. This new version was made using Stencyl, which we have liked much more! We decided to make this new version to be played using a web browser as our first trial with the new game engine. This means that the controls will now be the classic up, left and right arrow keys on the keyboard.
Secondly, we wanted to add COLOR to give it more visual appeal. So we designed a starry space background, and made a new version of each character themed stage with colorful pixels. 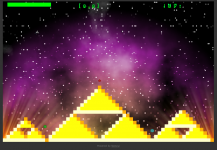 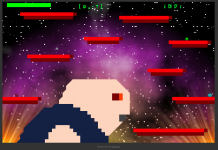 Next, we tweaked the game play. The main goal now will be to recollect items while avoiding to crash agains the terrain or obstacles. There will be a Training Mode and a Quest Mode. The Training Mode is basically static stages where the user can see the whole area that is to be explored in search for the three items that are required to pass the stage. The Quest Mode will also consist in recollecting items but there will be scrolling stages, and a surprise or two in hopes of making it more challenging. 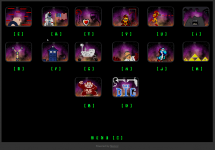 For the moment we are still testing the video game. Check out the sample video!
We hope to have it ready for its release really soon, so stay tuned!

We've added the game center option that will save and publish your score so you can compare with friends and compete for the highest score!

The first version of the game has been approved by Apple and is now out to download and play on the iPad for free!

Sent game for iPad version! We're hoping to soon have the Mac, Windows, and Linux versions as well!

Hey,i already watched the video and see the images,its a very very beautiful game,the colors are in a nice harmony with the scenary !
Also,the ideia of making a tribute to one of most important person in space science is Nice!
Cant wait to play the game

Damn, man. You have no idea what your comment means to me. I just read it though... my apologies... I'm redesigning the whole game. Many, many thanks again!