E1M1 - Doom 3 inspired remake by Deimos Anomaly. This map is some sort of crossover between the original Doom E1M1 Map "Hangar" and Doom 3 "Mars City". It's mostly a remake of the first one, with some parts of the Doom 3 map implemented along the level. And of course, some new and cool areas too! Being built between 2009 and 2010.

This map is some sort of crossover between the original Doom E1M1 Map "Hangar" and Doom 3 "Mars City".
It's mostly a remake of the first one, with some parts of the Doom 3 map implemented along the level.
And of course, some new and cool areas too!

Being built between 2009 and 2010, i still think it's a pretty nice and solid map, and i'm even surprised on what i did
on some areas with those highly detailed sectors.
That's why i decided to make a small revisition of the map and upgrade it as a single level for GZDoom.

Though the ambientation of the level comes straight from Doom 3, i increased the number of dynamic lights,
allowing the player to run without the need of any kind of flashlight.
I also added lots of enemies, so now it's like any classic Doom map: action and more action!

History of the map, and about what was UDoom3:
UDoom3 was a TC i started in 2006 with the idea of a remake of the first Doom chapter but based on Doom 3.
For this reason I took "Ultimate Doom 3" (UDoom3) as a name for the project.
On the first version i did i worked with classic "Doom in Doom" engine with some ZDoom features,
like transparent textures; and was my first attempt on Doom maps.

I created the "Anomaly Team" along with Phobos Anomaly maper to work on what was planed to be the first version,
but one year later after some delays and creative differences the team was disbanded and the project was canceled
for the aparition of the now classic KDIZD, a project with some close concept to UDoom3 and a much more advanced
work, engine and features compared with my poor attempt.

Later in 2008 i restarted UDoom3 but this time working through ZDoom engine, and with better skills i rebuilt all
maps of the old version with better features, although it wasn't enough.

Not happy with the results, in 2009 i learned to work with GZDoom engine, so i had to upgrade all the maps again
to adapt them with the more advanced engine and my improved skills.
And after almost a pair of years with delays and lots of upgrades/reconfigurations with the project i managed
to finish a whole map and prepare it as a demo and presentation to my ambitious UDoom3 TC.

Released in early 2011 as a demo on the ZDoom forums, it reached a less than nothing popularity, being almost
ignored; to finally end buried and forgotten underneath an endless number of posts and pages of the forum.
I don't know what was wrong with it, although i have a little clue.

Whatever what happened to the demo, now and almost three years after the release i decided to do a small
revisition because i still think it's a pretty nice map. And now with all the upgrades it's more funnier than before.
I added light decals on some textures, also new spark effects to make it more nice.
And after all, I hope you enjoy it and like it a bit more this time! 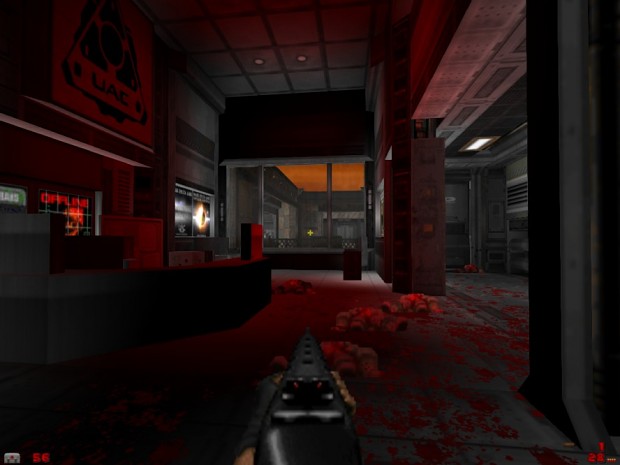 can this go with zdoom

its Boom compatible so yeah.

I was impressed with this when I found it on the ZDoom forums, looking forward to trying this version out.

I loved this map when I saw it.

Could you make more maps like this PLEASE? And would it be possible to use the English radio audio or no audio at all when playing?

Using this in conjunction with DOOM 3 monster SFX, weapons and the Dark DOOM flashlight make this beyond amazing in every level!

cant disagree... this wad is amazing

It's weird.... when I load this up it looks all dark and grey and devoid of color. Im relatively new to modding so is there any way I can fix this...?