In Disco Danger your job is to help Disco Dave and a collection of other equally delirious and dexterous dancers find their way across the dancefloor to a partner. Better hurry, you’ve only got so long before the song ends. That’d be bad, wouldn’t it? The dancers are particular about how to move. If you’re on the floor, you’ve got to move to the beat. The beat has a specific colour matched to it and the tiles of the dance floor will change in time with this beat. Disco Dave and co can only move onto a tile that has a colour that matches the beat. It’s the rules of the dance floor, you know.

Disco Danger is out!

Greetings to one and all. After a rough little patch before release, Disco Danger is now 100% out of the App-Store. While it is a sort of 'Open Beta' like environment for it, I can assure you all that the game is fully stable, bug free (we hope) and ready to be enjoyed by all!

All who have an Android Device that meets the system requirements (2.3 and up). There is that to consider.
But if you do have one such device then you can absolutely play Disco Danger!

You can find it on the Google Play Store, just search Disco Danger or click the link on the sidebar of this page.

For those of you who haven't been keeping up with my articles and updates, you may wonder, what is Disco Danger?
Disco Danger is a student project from SAE Brisbane, an introduction to marketing and a demonstration of our skills. It is both a way to get our feet wet in the industry and a way to prove our own skill in game design and programming.

Disco Danger itself is a puzzle-rhythm game where the player controls a dancer and must navigate across the floor to get to the Dance Partner. But one cannot simply just waltz right over. You have to move with the beat.
The beat itself is represented by a particular colour, as shown on the screenshot below. In this level, the first one, you can only move onto Blue tiles. Every second, every beat in the music, the pattern of the level will scroll down. To help the player know what colour they can move onto at a give time, that colour is brighter than the others. 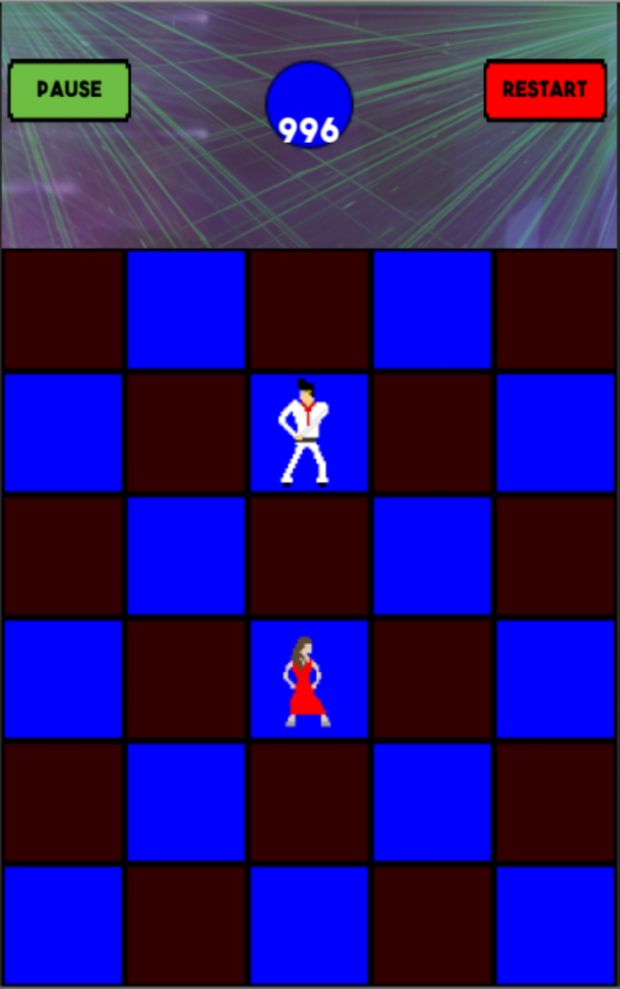 So on the next second, the blue tile that Disco Dave (White suit, player) is standing on will be below them, letting them move there.
Keep in time with the music and the beat to get through the levels faster, but be careful, sometimes there is more than one colour that you can match. Of course, there is also a time limit on each level. If you try to move onto a tile that isn't right, you lose some time. 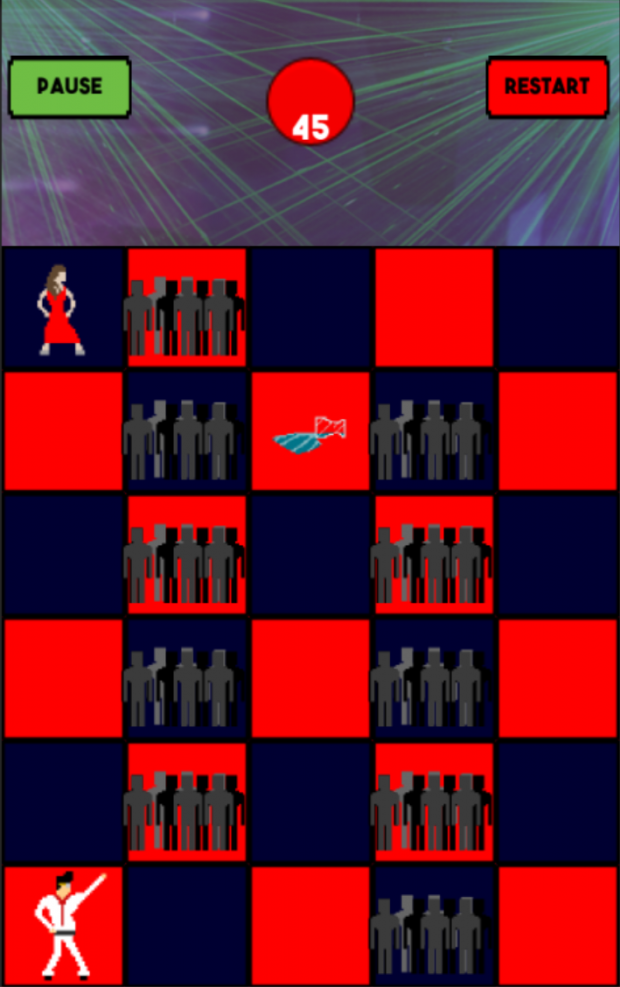 That's not all, there are many obstacles on the way to your dance partner. Other dances that wont move out of the way, spilled drinks or broken glass. Be careful, find your way.
Dance through this danger!

There are currently 30 levels of Disco fun to enjoy. More will be added at a later date. Furthermore, we have a scheduled update coming on the 18th which will include some aesthetic changes and a new feature.

If you want to dance a little bit differently, feel free to press the 'Change Character' button on the title screen and pick another one. We've got many to choose from, that range from recolours to entirely different dancers.

Our artists are working on more if the current selection don't whet your appetite. In fact, if you have any suggestions I would love to hear them.

I look forward to hearing from players who enjoy the game. Come on, get down and enjoy this Disco Danger!

Missed us? Disco Danger version 1.2 is on the Google Play Store, enjoy the new tunes.

Disco Danger is going to be released in full on Thursday the 4th of August.

Thanks to those who played the Beta. The feedback that was given was very useful, and I can't wait to show you guys what we've updated. Also: Would anyone...

Disco Danger has gone opened a Beta on the Google Play Store.