The kingdom of Khandaras has fallen into chaos. An unknown force of evil has swept the land, plunging it into civil war and terrorising the populace. A mad king, his missing son and a mysterious archbishop are all pieces to the puzzle that faces you...

Diablo invites you to enter a world of dark gothic fantasy. Play as a brave Warrior, cunning Rogue or mysterious Sorcerer. As you venture deeper into the Labyrinth, You'll discover weapons, armour, and magical treasures, and develop your character's skills and abilities.

For anybody who liked Diablo 1 and its horror focus and heavy atmosphere. Its had a HD makeover, with a new version released on the website.


In addition to adding support for modern widescreen resolutions (and you can zoom the camera to your liking) this mod does much more than just that.

The UI is completely overhauled to function like a newer game, albeit with the same aesthetics as D1. It functions much like Diablo 2 now with the trade system, they've added stashes, crafting, tons of new armors and weapon sets, waypoints, colored lighting, new enemies and areas, blood effects for attacks, tons of new skills, new spells (cold spells are in the game now) classes, and generally pretty much added every intuitive improvement that D2 brought, plus a ton of new things.

Also, they added the quests that were cut from the game, and new NPCs like Gheed (complete with a gambling system like D2) - and NPCs also wander around and engage each other too.

I'm really surprised they managed all this with Diablo 1, considering just 2 years ago people were struggling to add new tilesets. Big Thanks to BrightLord.

New patch v6.9 for Diablo 1: The Awakening is now available to download on the official website of the mod.

New patch v6.8 for Diablo 1: The Awakening is now available to download on the official website of the mod.

Stay Awhile and Listen to the Story Behind Diablo's Creation.

This is a 1997 Shareware CD-Rom by Blizzard, It's a demo of the highly acclaimed RPG/Hack N Slash game Diablo, The demo also contains a old non-fuctioning...

A small change to enable a cut monster type: the Incinerator.

A small fix to a broken warrior death animation (unarmed with shield).

diablo hd is a masterpiece...

search "Diablo THE HELL" for an ultimate Diablo 1 mod
12 years in development by a team (not just one person)
it has Hellfire levels as well, but everything is improved
24 basic levels
19 quest levels
6 character classes
5 pages of useful magic spells
400 base items
over 800 unique items
set items for every class
unchallenged by any other mod in the number of improvements and variety

Have to try this game out

Wow, I didn't know until now that this game came out on the same year as Daggerfall.

can someone upload a link to download this game? i need it and wanna play it so bad

Go to the store and buy it.

Diablo and Doom II, the most satanic old games!!!

Considering the time it came out, Diablo was the direct responsible for a lot of games that showed up to this day.
Even though technically outdated, it's superb story and music still inspires a lot of fans around the world.
Almost 15 years after, with it's overannounced third sequel as stillborn, this game has grown to be a huge cult classic. 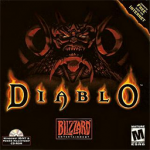