On this dark night, under the full blood moon, a warrior has fallen in battle.Not just any warrior, but the most feared of their time.
So fierce and deadly in battle that death itself took notice.Their name whispered from the lips of souls passing from the world of the living. Upon arriving in the lands of death this warrior was presented with a bargain. To serve death under the command of The Reaper, or to curse their own bloodline forever more. The bargain was struck, the deal set in blood. But death itself held no fear for this warrior, and The Reaper alone would not long keep them enslaved.

This warrior has risen from the ashes of battle and sworn to fight the minions of death until they can secure the safety of their bloodline. The path will be long, the battles bloody, and the price paid unspeakable. But in the end, if this warrior stays true to their course, even The Reaper wont be able to defeat them.
For they themselves will become, The Death Hunters! 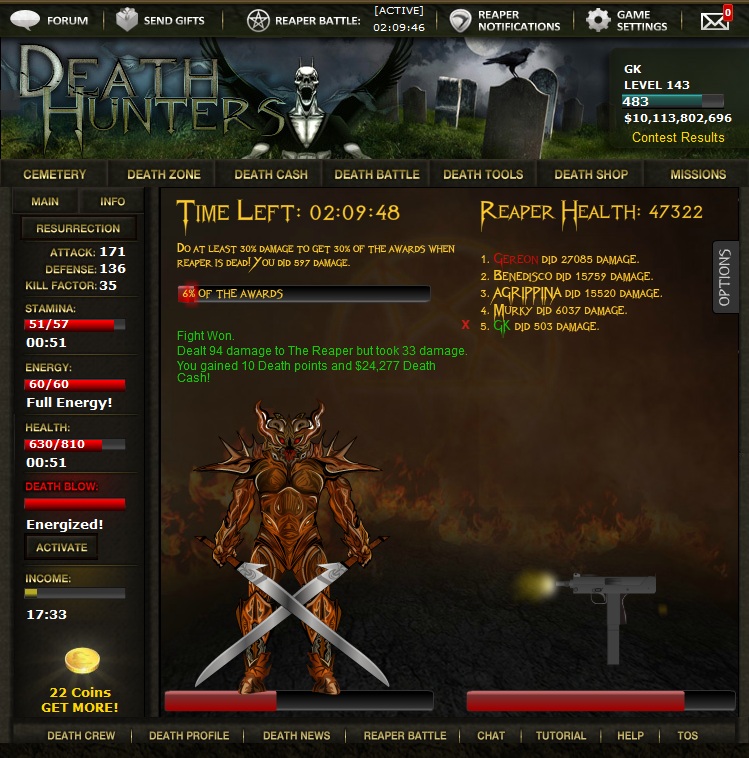 This is an actual print screen from the game, reaper battles. Every player can host their own battles with the reapers. Each reaper battle is different, different difficulty, max allowed users to help on the battle...
Each month we host a Special Reaper Battle in which every player can join and big awards are given to the players.
Game features real, flash animated weapons, blood animations, many special and environment effects as well as original sounds and music.

Download 3 high resolution wallpapers pack or view them on our web page, the "Multimedia" section from the top menu and download them from there.

The Return of Magic Online Adventure