Curse is a first-person action/horror game where players take the role of a dead pharaoh, journeying through the underworld, and seeking the truth of an ancient myth of immortality.

Hello, Thank you for checking out this quick (and short) update!

Sorry everybody for the lack of news updates;I'm posting this to assure everybody that the Curse project is active and we are working on it slowly but continuously. 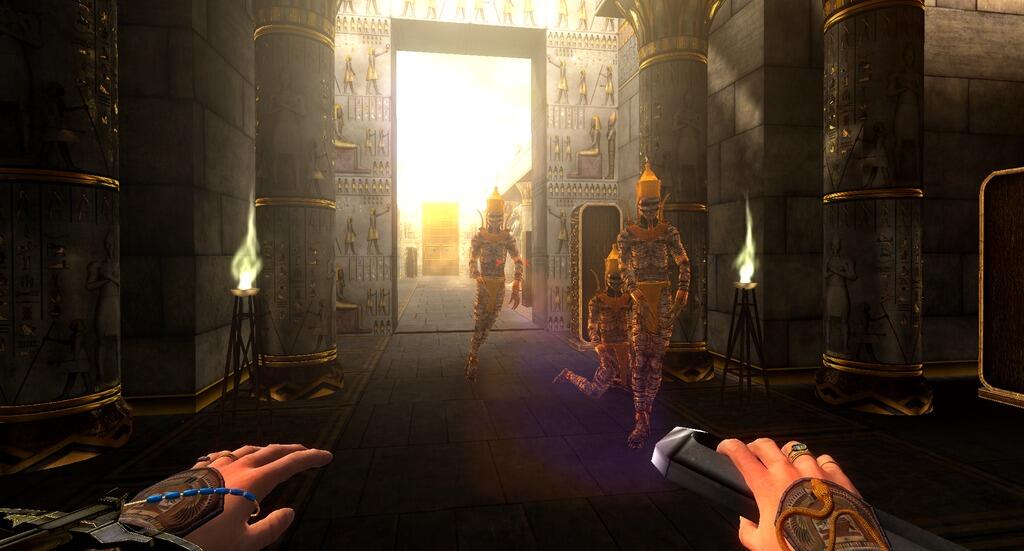 Currently we are in the process of converting the project to Unity5 (all the screenshots here, including the one above are made with Unity 3.5), so the screenshots in the next update will feature Unity5's new lighting and physically based shading.

The opening of the mouth,

is an ancient Egyptian ritual to magically open a mummy's mouth so that it could breathe and speak.Don't try this at home,it could go totally wrong!

Curse is an Egypt themed first-person action/horror game. Check out it's teaser!

Here's some rather geeky stuff: measuring responsiveness with a modded controller and a video camera.

February issue of the DemonSlayer magazine is out!

Well,kind of. As an indie developer I only had time + resources to create its front cover :) Check out the new screenshots instead.

So sad that I enjoyed the Egyptian art style in the first episode so much. I used to couldn't wait for the modern setting in the would be episode 2.

1) Please change 'RELEASED to TBD' as the game is still in development.
2) Purchase tab in the interface-line on the right directs to CURSE - SILENT MARSHES hidden game, please remove as it has nothing common with your game.

Thank You and awaiting for Your game in complete state.

short answer: later:(
well, probably much later.
check out my other game in the meantime:
Store.steampowered.com
it is pretty weird tho'

So, is it still alive? So much time passed and no news so far.

Yes,we're still working on it.In the meantime I've spent year on this: Indiedb.com
This(Theatre of Doom) is a Curse side-project, created to develop various tech(AI,game logic) for Curse.
The idea is to not go broke, while we develop an Action FPS game:)

Is this dead? Please not be dead.

umm, kinda, yes. No guns in Curse though.